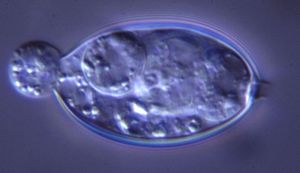 One of the points that Elio mentioned above has taken on major real world significance of late. That concerns the ability of the sexual oospores to survive in the envi­ronment for periods of a year or more, whereas the wall-less asexual zoospores can survive only within host tis­sues. The sexual life cycle requires, as you would imag­ine, a minimum of two mating types. This has major ra­mifications for the success of the oomycete pathogen responsible for potato blight, Phytophthora infestans.

Until 1976, only a single mating type, A-1, was found in almost all of its infections outside of Me­xico (its region of origin). The ability of this blight to transform a whole field of potatoes from slightly diseased to almost completely destroyed in a few days is the result of its production of enormous numbers of zoospores. During the winter of 1976/77, mating type A-2 escaped from Mexico in a 25,000 metric ton shipment of potatoes exported to Europe, and has since become established worldwide. This poses several serious challenges to those who would cultivate or consume potatoes.

For one, P. infestans is now able to produce resistant oospores that can survive in the environ­ment from year to year. Added to that, the A-2 escapees were a diverse lot in other respects, in­cluding their pathogenicity factors and their resistance to currently used "fungicides." The genetic recombination accompanying sexual reproduction gives P. infestans further advantages in the evolutionary arms race with host plant defenses.

Potato crop yields are decreasing worldwide. When in the late 1990s these aggressive P. infestans strains arrived in Russia, for example, they ravaged more of the potato crop than any time in me­mory, destroying upwards of 70% of the harvest in many areas. K. V. Raman, a professor of plant breeding at Cornell University and an authority on potatoes in Mexico and Eastern Europe, ob­serves:"The conditions prevalent in today’s Russia are all too reminiscent of those of Ireland in the mid-19th century." That was the time of the Great Famine in Ireland (the subject of our next post). As was the case then in Ireland, Russia today has a population dependent on the potato and an aggressive blight out of control. In this, Russia is not alone. This time, the impacts are expected to be global.