« Marine Archaea and the Nitrogen Cycle | Main | A Condominium Plant »

The Leopard and the Mouse: A Microbiologist's Take 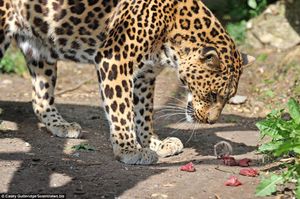 Nineteen-year-old photography student Casey Gutte­ridge captured this extraordinary scene at the Santago Rare Leopard Project in Hertfordshire, UK. Casey, who was photographing the leopard Sheena for a course project, said: "I have no idea where the mouse came from – he just appeared in the enclosure after the keeper had dropped in the meat for the leopard. He didn't take any notice of the leopard, just went straight over to the meat and started feeding himself. But the leopard was pretty surprised – she bent down and sniffed the mouse and flinched a bit like she was scared. In the meantime the mouse just carried on eating like nothing had hap­pened. But even a gentle shove does not deter the little creature from getting his fill... the mouse continued to eat the leopard's lunch and show the leopard who was boss!" Sheena was brought in to the Santago Rare Leopard Project from a UK zoo when she was just four months old.

So, what was going on? How can one explain this unusual behavior of (likely) predator and (likely) prey?

Hypothesis #1 (by friend Betty Feinberg). The mouse is infected with Toxoplasma gondii, probably from ingesting T. gondii oocysts excreted by an infected feline and present on something the mouse ate. As a result of its infection, the mouse's behavior is modified, including loss of fear of cats. Having no fear of the huge feline and attracted by the raw meat, it helps itself to the leo­pard's dinner. The leopard, being raised in captivity, has never seen a mouse before. Instead of eating the mouse it tries simply to brush it aside as it would an insect – thus thwarting the mi­crobe. It is the goal of the microbe to have the infected mouse eaten by a cat, thereby conveying the microbe once again to a cat – its primary host. 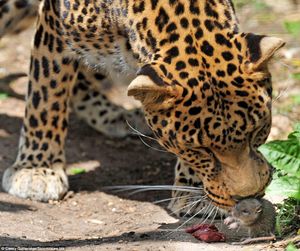 Hypothesis #2 (by son Marc Chipault, a field biologist). The mouse is immature. Its fur, its size, and the size of its paws all indicate that it is a juvenile. Immature mice are notoriously unafraid of almost everything, including humans. The leopard has never been loose in the wild. It views its food as coming in pieces of flesh provided by humans. It has no association of food with living animals (Marc adds, that this is the case with most American humans). The leopard views the mouse as a trivial an­noyance, since it is neither a source of food nor a serious competitor for food.

As a scientist, I shrink from casting a vote. I would like to have blood samples from both animals to be assayed for T. gondii infection. Notice that the two hypotheses are not really mutually exclusive. My inclination is to go with Hypothesis #1, but only because it helps emphasize the insidious ways by which microbes rule us. But should personal opinions count in the real world?

Rat saves the king
A pride of lions was led by the strongest of them all, while the pride followed this big black mane male in the shade of trees where it stood to find a suitable place to lie down, the pride took off after a herd of dears while the lion got entangled in a net which was a trap set by the poacher sitting on top of the tree, the poacher kept sitting as he knew the pride would come any moment with their catch to share the hunt. To his shock he saw a rat come out of the bushes, the rat circled around the entangled lion who was put down sideways helpless with his head on the ground after looking eye to eye in the lions face the rat jumped on lions body and started chewing, biting & cutting the net, the lion picked his head and looked at the rat with mercy full eyes, the lion could feel the loosening of the net, the poacher could not do anything as he had the fear of prides return.
The mouse was fast, it had sharp teeth which matched his urge to nibble off the net and as told by the poacher his expensive net was reduced in large fragments of threads and strands with no ends, the lion came loose and stood up in front of the rat with gratitude & affection all written on his face.