The Limitations of LB Medium

LB medium, also known incorrectly as Luria-Bertani medium, is widely used to grow bacterial cul­tures, mainly because it is easy to prepare and provides a broad base of nutrients. LB broth con­tains, per ml, 10 mg tryptone (a mixture of peptides formed by the digestion of casein with the pancreatic enzyme, trypsin), 5 mg yeast extract (an autolysate of yeast cells), and 5 or 10 mg NaCl. It was formulated by Giuseppe Bertani in 1951 for studying lysogeny in Escherichia coli. He called it "Lysogeny Broth," or LB. Notably, the original formulation included 1 mg/ml glucose, which has been dropped in more recent times. This medium was designed for work at low bacterial densi­ties, a key point of this article.

While this may appear a tasty dish for many bacteria of research interest, it is an inappropriate choice for physiological studies wherein reproducibility is required. Since only bacterial cultures in balanced growth (achieved by sufficient time in exponential growth) have a reproducible average cell size and chemical composition, none of the components of liquid media should become ex­hausted during growth of the culture. Is this the case with LB broth? To answer this question, we must know what limits bacterial growth in LB broth.

Growth of E. coli usually stops, even in the presence of the large total concentration of organic nu­trients in LB broth, when the OD600 reaches around 2, corresponding to about 0.6 mg of E. coli (dry weight) per ml. The reason is not difficult to find: LB medium provides only a scant amount of carbohydrates, and surprisingly small amounts of other utilizable carbon sources. Tryptone and yeast extract are mostly composed of peptides of varying length. In their definitive 1968 study of Bacto Neopeptone using gel filtration, Payne and Gilvarg found that there was a clear size limit for the usable peptides at about 650 daltons – which corresponds to the exclusion limit of porin chan­nels determined several years later. The smaller, usable peptides were a minority, perhaps a quarter of the entire mixture. Free amino acids were an even smaller minority, approximately 1% or less of the entire preparation. If we assume a similar size distribution for the peptides in tryp­tone and yeast extract, we can postulate that the yield of E. coli is limited primarily by the available carbon sources. 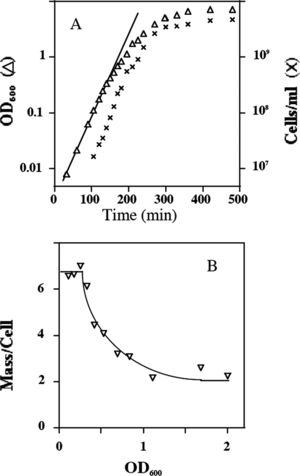 (Click to enlarge)
Growth of E. coli MG1655 in Luria-Bertani broth. An overnight culture was diluted 5,000-fold in Luria-Bertani broth and cultivated at 37°C with vigorous aera­tion. A The OD600 (triangles) and cell con­centration (crosses) were measured per­iodically. B The ratio of the OD600 to the cell concentration was calculated at each point and multiplied by 109. Source

In 2007, D'Ari and his colleagues did a careful study of growth of E. coli in LB broth. They showed that very early in the period usually considered to be well within the ex­ponential phase, when the OD600 reached around 0.3, there is an abrupt change in physiology and the cell size begins to decrease. This observation is not new. As ac­knowledged by the D'Ari group, Wang and Koch in 1978 had similarly shown that, very early in the "exponential" growth phase, E. coli in LB broth goes through a diauxie-like change in growth behavior. D'Ari's group went fur­ther and suggested that what matters is not the general availability of amino acids generated by the intracellular hydrolysis of imported peptides, but the availability of amino acids easily utilized as carbon sources. Although these workers monitored only the free amino acids in the medium (whereas the cells were undoubtedly utilizing peptides for the most part), they concluded that during growth in LB broth E. coli cells undergo alterations in carbon nutrition, using the easier-to-utilize amino acids until they were depleted, then switching to the harder-to-use amino acids.

As an aside, I'd like to mention that the conclusion of D'Ari et al. is attractive to me for sentimental reasons. Back in the 1950s, I was in a laboratory in Japan that studied the sequential utilization of amino acids in com­plex media. My mentor, Kiyokatsu Kinjo, was immensely impressed by Jacques Monod's study of diauxic growth done under another resource-strained environment – Paris during the WWII – and tried to mimic Monod's work by studying the utilization of amino acids as the sole nitrogen source. Indeed, using a Vibrio strain he showed diauxic growth with various mixtures of amino acids. He established that aspartate and arginine (and later serine and cysteine were also added to this group) are used first, while other amino acids (such as leucine and valine) are not used until the cells enter the second phase.

Although Kinjo was studying the preferential utilization of amino acids as sources of nitrogen, probably their utilization as carbon sources follows a similar pattern since aspartate and serine would generate C4 and C3 compounds that readily enter the central metabolism. We should note, however, that alterations in carbon nutrition occur even in some synthetic (minimal) media. As is well known, E. coli growing in glucose-minimal medium converts glucose into acetate and other organic acids during the first phase; then later in the "exponential growth" phase it grows prima­rily by oxidizing these organic acids. Thus, changes in carbon nutrition are perhaps an inevitable complication of batch culture techniques.

Are the shifting carbon sources the only cause of alterations in a young E. coli culture growing in LB broth? I would like to propose that another factor may be an even more profound influence: the availability of divalent cations. In the 1980s, Brian Wilkinson noted that the properties of the outer membrane of Paracoccus denitrificans were very different depending on whether the bac­teria were grown in a divalent-cation-suf­ficient synthetic medium or a complex medium contain­ing Bacto-Peptone and yeast extract. He and his student, Sechan Wee, measured the Mg2+ content of these components as 5.4 and 29 µmol/g. (The Ca2+ content was much lower.) This very import­ant paper is not included in the Medline database, and has been cited only twice (once by myself). If we assume that Difco Tryptone has a similar Mg2+ content, the total Mg2+ content of LB will be only about 200 µM.

However, E. coli needs a lot of Mg2+ and Ca2+ to bridge the highly negatively charged LPS mole­cules in its outer membrane. The total amount of Mg2+ associated with E. coli cells is estimated to be around 100 mM. (This information is accessible by subscription here.) If a liter of LB broth eventually produces 2 g (dry weight) or about 6 ml (cellular volume) of E. coli, we would need 600 μmol of Mg2+, three times more than what is available in LB. The LPS structure can be modified through the PhoPQ system and E. coli undoubtedly survives even under these Mg2+-starvation conditions, but the Mg2+ content of the cells, especially of the outer membrane, changes through­out the "exponential phase" and the cells are not expected to be too happy. The situation would be much worse if we accept the experimentally determined value for the Mg2+ content of LB broth cited by Papp-Wallace and Maguire in the EcoSal chapter (accessible by subscription here): 30–40 µmol per liter. My feeling is that this serious problem with LB broth has been neglected for many years. It may even be that E. coli grown in LB broth often comes to the stationary phase due to the lack of Mg2+! Certainly one cannot blindly use LB medium if one is observing phenomena involving the integrity of the outer membrane or ionic interactions of LPS, such as the susceptibility of bac­teria to polycationic drugs (e.g., aminoglycosides or polymyxin). In this sense, clinical microbiolo­gists are ahead of physiologists; for such purposes they use exclusively "cation-adjusted" Mueller-Hinton broth that contains about 500 µmol per liter of both Mg2+ and Ca2+. I also note that the MOPS medium of Neidhardt, perhaps the only rationally-designed minimal medium, contains more than 500 µmol of Mg2+ per liter. I hope that my colleagues will pay more attention to the availability of divalent cations in the culture medium.

Finally, one must point out that LB media sold as premixed capsules by certain companies contain bile salts as a contaminate of the "beef" product present in the medium. The contamination is suf­ficient to prevent the growth of mutants that lack the multidrug efflux pump (AcrAB-TolC) of E. coli, one function of which is to protect the cells from bile salts in their environment. This unpleas­ant fact speaks of the differences between batches of premixed medium. Unless made from scratch, LB broth can vary from batch to batch, thus cannot be considered reproducible.

The bottom line is that, from a multitude of perspectives, the use of LB medium is to be discour­aged, especially for use in any studies in which the physiological state and metabolic functions of the cell matter. However, I must confess that I have been guilty of committing this sin many times in my career. 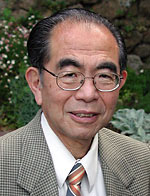 Moselio Schaechter on November 09, 2009 at 09:26 AM in Methodology, Physiology & Genetics, Teachers Corner | Permalink