« The Attendee's Guide to Scientific Meetings | Main | Ways to Go »

A Matter of Timing: Yellow Fever and the Mosquito Hypothesis

Over half a century ago, initiation of worldwide vaccination programs drastically curtailed the spread of yellow fever. In recent years, however, the disease has re-emerged, with Central and West Africa being hit particularly hard. Last month, the WHO’s Yellow Fever Initiative launched a campaign aimed at vaccinating 12 million persons in Benin, Liberia and Sierra Leone. In light of these events, it seemed an appropriate moment to look back on the year 1900 and the role yellow fever played at the birth of virology as a scientific discipline. On September 26, 1900, Major Jefferson Randall Kean, an army surgeon stationed in Cuba, sent a message by tele­gram to Mabel H. Lazear of Beverly, Massachussets. Pain­fully brief, his words belied a major discovery in the annals of microbiology: Dr. Lazear died at 8 this morning – Kean.

Jesse Lazear was a member of the U.S. Army’s Yellow Fever Commission in Cuba, a team headed by U.S. Army surgeon Walter Reed and including, in addition to Dr. Lazear, James Carroll and the Cuban Aristides Agramonte. In the weeks preceding his illness, Lazear experimentally transmitted yellow fever to a handful of human subjects by exposing them to the bites of mosquitoes that had previously fed on patients with yellow fever. Experiments conducted by others had failed and the mosquito hypothesis, championed since 1881 by the Cuban physician Carlos Findlay, had fallen out of contention. Although Lazear’s notes are unclear on the point, Reed and others believe he played a hand in his own death, intentionally including himself among the experimental subjects.

In a letter dated September 8, 1900, Lazear confided to his wife, “I rather think I am on the track of the real germ, but nothing must be said as yet, not same a hint [sic] I have not mentioned it to a soul." Seventeen days later, on September 25 (note it was actually the day before the telegram was sent) he succumbed to yellow fever. Lazear’s results and untimely death energized the commission, and within weeks Reed established a field station on a farm near Havana. The site was fittingly christened as Camp Lazear, and it was here that the decisive experiments were initiated in late November, less than two months after Lazear’s death.

In seeking to validate the mosquito hypothesis, Reed’s team also sought to rule out a popular alternative hypothesis – that yellow fever was spread by “fomites” (fomite refering to objects or surfaces that serve as a passive platform for spreading germs, such as dirt, dust, clothes, coins, door­knobs). At the camp, the team erected two small wooden structures, one to house subjects in the mosquito bite experiments, and one in which “fomite” subjects would be in close physical contact with (to the point of sleeping on) filthy, blood-and-vomit caked clothing and blankets obtained from yellow fever patients. In the carefully sanitized mosquito hut, test subjects (those to be inoculated by mosquito bite) and control subjects (unbitten) were separated from one another and from the outside by wire screens. 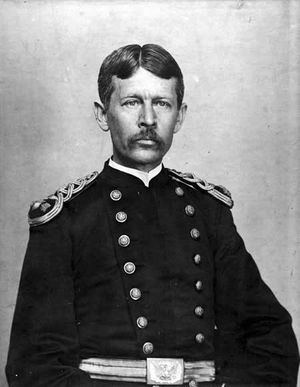 Within days the “mosquito” subjects began developing ob­vious symptoms of yellow fever, whereas not a single oc­cupant of the “fomite” hut developed signs of the disease. As the results became clear to the subjects in Camp Lazear over the ensuing weeks, relief within the fomite cohort was apparent, as remarked upon by Reed:

With the occurrence of these cases of mosquito infection, the countenances of these men, which had before borne the serious aspect of those who were bravely facing an unseen foe, suddenly took on the glad expression of "schoolboys let out for a holiday," and from this time their contempt for "fomites" could not find sufficient expression. Thus illustrating once more, gentlemen, the old adage that familiarity, even with fomites, may breed contempt.

In very short order, the work of the Yellow Fever Commission and its Cuban and American sub­jects established three remarkable facts: that yellow fever was transmitted by mosquitoes, that transmission required that the mosquitoes had fed on donors during the first few days following infection, and that an incubation period of several days must pass before the mosquito vector was capable of transmitting the disease to another individual. While the nature of the infectious agent remained a mystery, identification of the mode of transmission led U.S. Surgeon General William C. Gorgas to take decisive action in Cuba. Gorgas instituted a successful program of mosquito eradication, along with containment and quarantine, which immediately and drastically reduced the incidence of the disease on the island. 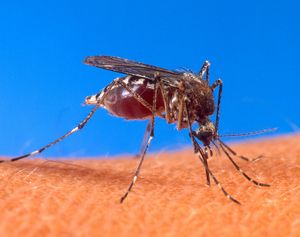 In 1900 something new was brewing in the field of mi­cro­biology, and here the work of the Yellow Fever Commis­sion was destined to play a major role. Just two years earlier, in 1898, Martinus Beijerinck used a Chamberland-Pasteur filter (the pores of which were too small for bac­teria to pass through) to demonstrate that a mottling disease of tobacco plants (tobacco mosaic disease) was caused by an ultramicroscopic, filterable infectious agent – what he called a contagium vivum fluidum (virus in mo­dern parlance). In 1899, the year before the Camp Lazear experiments, Loeffler and Frosch (using a Berke­feld filter) reported a similar property for the agent of foot-and-mouth disease. Thus it was in August of 1901, less than a year after the Camp Lazear experiments, that Commission member James Carroll returned to Cuba and, aware of the experiments of Loeffler and Frosch, proceeded to demonstrate that filtered serum from one yellow fever patient would induce yellow fever when injected into a second. The subsequent filtration and passage of serum from the second subject to a third, with the same result, ruled in favor of a replicating, infectious agent and argued against a toxin (which would presumably have suffered extreme dilution upon injection and circulation in the body of the second patient). Yellow fever thus became the first human infectious disease to be attributed to a virus. 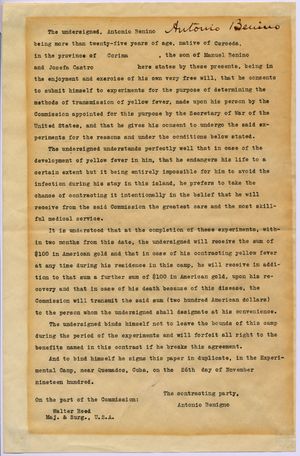 Typewritten copy of the contract be­tween Walter Reed and one of the Camp Lazear volunteers, Antonio Benigno, in English. Courtesy of Historical Collections & Services, Claude Moore Health Scien­ces Library, University of Virginia. The Spanish version, with both Reed’s and Benigno’s signatures, can be viewed on­line through the Philip S. Hench Walter Reed Yellow Fever Collection

Yellow fever virus (YFV) is now considered the type virus of the Flaviviridae (flavus = yellow), a large family that in­cludes the West Nile and dengue viruses (also mosquito-borne). Lazear’s success in the summer of 1900 was a matter of good timing, so to speak, and can be explained in terms of the virus’ biology. It was critical that, in some experiments, Lazear’s mosquitoes fed on patients in the earliest days of yellow fever infection while the patients were still viremic. Only then does the mosquito stand a chance of becoming infected. Moreover, in some cases, Lazear allowed more than a dozen days to intervene between the time a mosquito fed on an infected patient and when the same mosquito was applied to a naïve subject. This provided the essential incubation period during which virus in the freshly ingested blood could infect the gut epithelial cells, replicate, and eventually spread via circulation to the insect’s salivary tissue. Pro­geny virus shed in the mosquito’s saliva can then be transmitted to the next human host. Prior attempts to prove the mosquito hypothesis were inconclusive largely because these conditions were not met.

We highly recommend a visit to the Philip S. Hench Wal­ter Reed Yellow Fever On-line Collection. The site is a vo­luminous online archive of the history of the 1900 Yellow Fever Commission, stocked with thousands of docu­ments, photographs, and high quality images of letters (personal and official), telegrams, fever charts, maps, drawings and government files. For the interested browser, a helpful starting point is the list of highlights assembled by the project staff. In compiling the personal, the official and the seemingly mundane, the archive succeeds in putting flesh on the bones of a scientific tale. Among the many thought provoking items gathered here can be found the original telegram to Mrs. Lazear announcing her husband’s death and Jesse Lazear’s fever chart recording the last few days of his life. One can also view what amounts to a predecessor of the modern “informed con­sent” form, the original signed contracts (some in Span­ish with accompanying translation) ac­knowl­edging the risks to life and limb and offering compen­sation of $100 to $200 in gold to study participants. The Camp Lazear experiments represent an almost impossible conflict between the use of human volunteers and the need to find out how an important disease is transmitted (which could lead to saving untold lives, and in this case did). Fortunately for us, modern technology often obviates the need to contemplate such a dilemma. 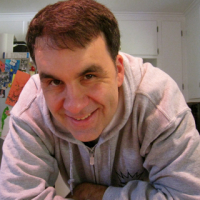