« Leaf-Cutters Get Their Fix (nitrogen fix, that is) | Main | Fine Reading: Classics from the Archives of the Royal Society »

On first inspection the habitat seems as sterile as the surface of autoclaved glassware... but the trained eye, aided by a microscope, sees otherwise.
E.O. Wilson, The Future of Life 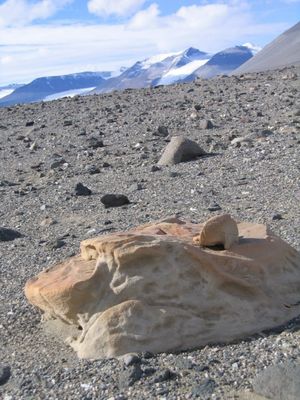 A ventifact (a stone sculpted by wind-driven sand) in the "Martian" landscape of the McMurdo Dry Valleys. Source

For the microbiologist, the next best thing to a trip to Mars might well be an expedition to the McMurdo Dry Valleys of Antarctica. Here, in the Earth's coldest and driest deserts, the conditions approach those on our neighboring planet and are thought to also approach the cold-arid limit for life. Not all of the Dry Valleys are equally dry. Some have perennially frozen, glacier-fed lakes and ephemeral streams, and thus have some soil moisture. Here one finds more of life, even three taxa of multicellular animals – tardigrades, rotifers, and, most numerous, bacterial-feeding nematodes. (Click here for our earlier post about the microbes found in a subglacial lake in this region.) Lacking such a source of water, thus being one of the truly dry Dry Valleys, is McKelvey Valley. What little snow falls here or blows in sublimates in the cold, hyper-arid conditions. How cold? The average air temperature is around –20°C. Winter brings prolonged periods of −55°C cold; in summer, air temperature can rise to a balmy 0°C. Humidity is low (<10% RH in winter). And then there are the ceaseless katabatic winds (from the Greek word katabatikos meaning "going downhill"). Cold, dense air falls downhill off the East Antarctic Ice Sheet and races through the valley at speeds commonly exceeding 50 km/h, sometimes reaching 320 km/h (200 mph). These winds evaporate all moisture and carry sand grains that scour the barren landscape. All in all, these conditions bear some resemblance to those used to freeze-dry biological samples. 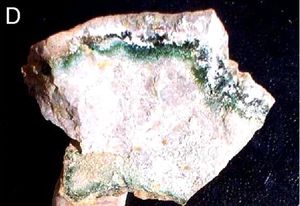 The valley floor is an unstable, gravelly, desiccated mine­ral soil with high salinity, little organic material, and the lowest nitrate concentrations known for any terrestrial soil. Surface temperatures fluctuate wildly under the in­tense summer sun, seesawing between –15° and +27.5°C in a few hours. UV is intense. And, of course, the winds scour the land and carry off any hint of moisture. Never­theless, life carries on. Some intrepid researchers left the comforts of Hong Kong or New Zealand or even relatively balmy Minnesota to look for organisms living under such extreme conditions. As reported in their recent paper, there are some bacteria living in these dry surface soils, mostly Acidobacteria and Actinobacteria. As you might expect, at the top of the list are desiccation tolerant taxa such as Deinococcus and Rubrobacter. There are also numerous nitrogen fixers. With neither photoautotrophs or chemoautotrophs present, organic carbon is at a premium, and its lack is thought to preclude further community development. 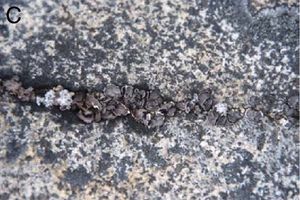 Both qualitatively and quantitatively, most of the life in this valley is associated not with the soil, but with the rocks. Here and there the flat-lying sedimentary bedrock is exposed. The rock surfaces, and even the shallow cracks, are likely sterile due to temperature fluctuations and abrasion from windblown sand. But any life that burrows in even just a few millimeters finds more stable temperatures and shelter from the incessant wind, even in the intense cold. Given the estimate that –6ºC or –8ºC is the lower limit for metabolic processes, some activity would be possible in these rock niches for 1000 hours per year at the most. However, that is enough to sustain microbial communities, both the endoliths, organisms that live within the porous structure of the rock itself and the chasmoliths that live within the cracks and crevices.

Due to their structure and mineralogy, sedimentary rocks such as the local sandstone are particu­larly well-suited for housing endoliths a few millimeters beneath their surface. Enough light pe­netrates for photosynthesis (at least during the months when there is sun), while damaging UV is reduced. In contrast to the soil community, these rock dwellers are mostly photoautotrophs. Two distinct communities of bacteria and eukaryotes are detectable, both visibly and experimentally. The upper 2 mm, called the lichen zone, is dominated by a lichenized fungus, Texosporium sancti-jacobi, associated with the green alga Trebouxia jamesii. Below 2 mm, the photosynthetic cyano­bacteria rule, mostly Chroococcidiopsis, a genus noted for having radioresistance comparable to that of Deinococcus radiodurans. Low light levels not withstanding, light may not be the factor limiting these endolithic communities, but rather lack of available CO2. The chasmolith commu­nities in the crevices are made up primarily of various lichens and cyanobacteria, combined with a distinctive sprinkling of other bacterial groups. 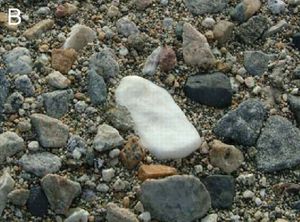 There is yet a fourth cryptic community here, the hypo­liths that live underneath light-colored, translucent stones. These are almost exclusively cyanobacteria, making do in an environment that receives less than 0.1% of the incident light. There are no fungi here, and only a very few algae.

There is a tendency to think that the more extreme the environment, the less the biological diversity. The com­munities in the Dry Valleys don't conform to that pattern. The endoliths and chasmoliths combined comprise more than 50 bacterial species (based on 98% identity of their 16S rDNA sequences). Although eukaryotes represent only 5% of these communities, they include four genera of fungi (both Ascomycota and Basidio­mycota) as well as three groups of algae. Add in the hypoliths, and these three lithic communities span 16 phyla in two domains.

What about the missing archaea, those masters of extreme environments? Not a one to be found so far, not even one lurking under a rock. Surely there are yet even more surprises to be found by the cryophilic researcher.