Fine Reading: Yet Another Reason to Appreciate Fungi 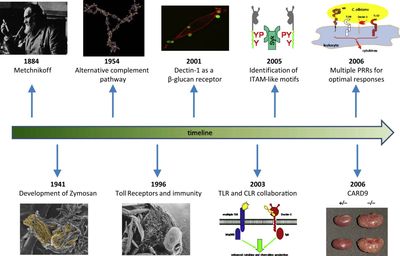 This blog, known as it for taking up the cause of the underdog, was fortified by reading How Fungi Have Shaped Our Under­standing of Mammalian Immunology in a re­cent issue of Cell Host and Microbe. Not on­ly that, but this is an exceptional piece of re­viewing. It's short (a mere three pages), fun to read, and to the point.

So, what's the case for fungi shaping our un­derstanding of immunology? (Note the in­clu­sion of "mammalian" in the title. A nice de­parture from the customary anthropocentri­city). The author, Gordon D. Brown from the University of Aber­deen, guides us through both early and late developments, starting with Elie Metchnikoff, the discoverer of pha­gocytosis who saw yeast cells being engulfed by the water flea Daphnia, through C-type lectins, Toll and Toll-like receptors, and in­tracellular signal pathways.

In the author’s words:"…fungi and their components have long been known to influence immune function, and the contributions made from the study of fungal infections are often underappreciated." Well, here's for trying.

Thanks for flagging that up Elio - from my view on the other side of this huge mountain known as immune function, I agree that "contributions made from the study of fungal infections are often underappreciated". The way some others (medical and lay people) constantly jump to talking about white blood cells attacking, or of immune responses triggered by single pathogens, constantly frustrates me in its simplicity of thinking. Wish I could see the whole article.