« Through the Looking Glass: Silicate in Bacterial Spores | Main | Cryptic Life in the Antarctic Dry Valleys »

Leaf-Cutters Get Their Fix (nitrogen fix, that is) 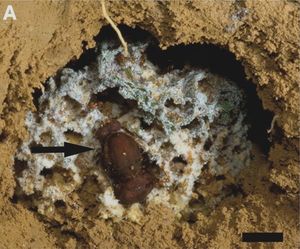 Ants span a great distance within the human psyche, from being insignificant little nuisances to occupying a prominent place in the biological scheme of things. They surely deserve the latter. Not only do they make up a large proportion of the animal biomass (up to 25% of the total in the tropics), but their social qualities make for sub­stantial mind food. It was not always so. Their very name is tendentious: it is derived from the West Ger­manic amaitjo, meaning "the biter," from Proto-Germanic ai-, "off, away" + mait- "cut." (If you see little connection between these roots and the word ant, keep in mind the Rules of Etymology, as expressed by a linguist friend: The vowels don't count and the consonants have arbitrary values.)

Few things have the psyche-tickling value of the leaf-cutter ants, those master agronomists that some 50 million years ago learned to cultivate their fungal foodstuff. The leaves they so assidu­ous­ly bring into their nest become the substrate on which the fungi grow. To deter unwanted fungal species that would otherwise move into their "fungus gardens," the ants harbor bacteria (Pseudonocardia) that make selective antifungal products. But their agricultural endeavors still leave us with a question: Where do the ants get their nitrogen? The plant tissues they use are poor in nitrogenous compounds and, of course, neither they nor their fungi can fix nitrogen. We'll tell you in a minute, but first a startling digression. 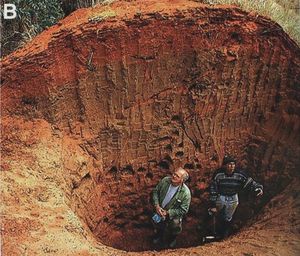 A partly excavated nest of a mature colo­ny. Source

The nests these leafcutter ants make are astounding in size, containing as many as eight million worker ants and occupying an underground volume of more than 20 m3! That’s about the size of a 100 square foot room, about the size of my small den. Researchers excavated such a nest, with a stunning visual effect (although we don't expect the ants approved of it).

Now, how about the source of nitrogen? The recent pa­per by the pioneer myco-myrmecologist (that's a term we just made up for fungus-ant expert) Cameron Currie and colleagues comes up with the answer: the fungus gar­dens contain nitrogen-fixing bacteria that provide a sub­stantial proportion of the needed nitrogen. The evidence? The nitrogen content is low in the plant food, greater in the fungus gardens, and greater still in the spent plant material that the ants carry to their midden-like refuse dumps. In addition, the authors measured acetylene reduction, a tried and true method for measuring the activity of nitrogenase, the enzyme that carries out nitrogen fixation. Nitrogenase activity was highest in the fungus gardens, although the level varied with the species of ants. Little enzyme activity was associated with the ants or their Pseudonocardia sym­bionts, but activity was found in bacteria isolated from the fungus gardens using nitrogen-free media. Prevalent were nitrogen-fixing species of Klebsiella and Pantoea.

What does it take for these symbiotic consortia to be successful? As the authors point out:"The ecological success of leaf-cutter ants is derived, in large part, from the combined ability of the ants to break down plant antifungal barriers and of the fungus garden to neutralize plant antiinsect toxins." As a result, leaf-cutters can subsist on a large variety of plants, many more than other herbivores. But they must rely on nitrogen-fixing symbionts for their nitrogen. In this, they resem­ble termites, which are known to have such bacterial symbionts. Not only does nitrogen fixation by the symbionts help the ants, it may also add fixed nitrogen to the environment, via the detritus from the spent fungus gardens.

Leaf cutting ants left their hunting-gathering mode of life and became farmers long before hu­mans did. In the process, they have acquired some pretty amazing uses for symbiotic relation­ships. They sure know how to farm sustainably!

If anyone is interested there is a live feed of the leaf-cutting ant housed at the University of Wisconsin-Madison that were studied for that publication. http://www.currielab.wisc.edu/antcam/