Measuring the Strength and Speed of the Microbial Grappling Hook 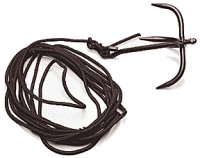 I'll admit, I’ve been in love with the type IV pili (T4P) for a long time. After memorizing all those complex pathways for regulation and metabolism, there was something so refreshing and accessible about pili. These bacterial sur­face appendages are, by their nature, mechanical struc­tures. They are easy to visualize. Their composition is simple: a Type IV pilus is a flexible filament made up of thousands of repeating pilin subunits. Bacteria employ this one structure for a variety of purposes: T4P play structural roles in motility and biofilm formation, and have also been implicated in DNA binding and uptake, in host cell signaling, and even in communication of elec­trical signals as 'nanowires'.

T4P are long and thin and have great tensile strength. They are involved in bacterial motility using a special mechanism: the pili are retracted into the cell when the pilin subunits are removed at the pilus’ cell end by an ATPase, the protein PilT. This results in the ratcheting of the pilus back into the cell. 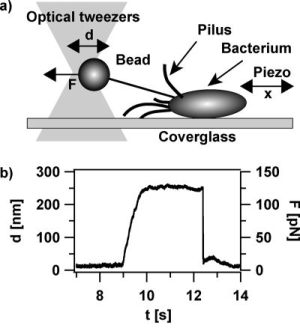 Experimental setup and force generation during T4P retraction. a) A cell is immo­bi­lized on a polystyrene-coated cover slide. When a T4P bound to a bead in the laser trap is retracted, it displaces the bead by a distance d from the center of the trap. The force feedback is triggered by mov­ing the slide by a distance x to maintain d at a constant value. b) Typical deflection, d, of the bead during pilus retraction as a function of time. F, force; t, time. Source

When a pilus is attached by its distal end to a surface of agar, the retraction is so strong that the cell is pulled for­ward in a kind of movement called twitching motility. When a bacterium attaches via the pilus to the surface of a host cell, it retracts until the two come in contact. In these cases, the pilus acts as a grappling hook, pulling the cell along in short bursts of pili elongation, attach­ment, and retraction.

The force exerted in pilus retraction as well as its speed have been recently measured. Just how much force can be exerted during the retraction of one pilus? How fast can it retract? If you apply force to the pilus, does it change the speed of retraction? These are physics ex­periments, albeit at a microscopic scale. The authors used laser tweezers to measure the force and velocity of pilus retraction. The experimental setup consists of im­mobilizing a cell on a microscope slide and linking a bead to the end of a pilus. The bead can be localized via a laser trap, and the distance it travels recorded as a function of force and time.

Using this approach, they pitted two different microbes, Myxococcus xanthus and Neisseria gonor­rhoeae, against one another in the equivalent of a bacterial tractor pull. They compared M. xan­thus T4P to previously reported stats for N. gonorrhoeae. Could two distinct bacteria, living very different lifestyles and gazing at each other from far across the phylogenetic tree, pull their pili with similar force? Similar velocity? 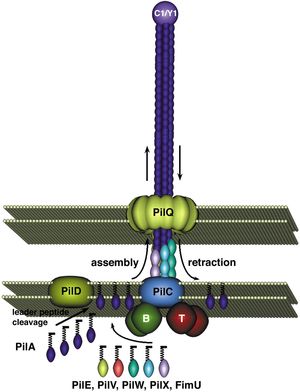 Model of type IV pili assembly and re­trac­tion. Prepilin leader sequences are cleav­ed by PilD. Processed PilA is assembled on a base of minor pilins (PilE, V, W, X, and FimU) by the action of the cytoplas­mic membrane protein PilC and the NTP-binding protein PilB. The pilus is extrud­ed through the outer membrane via a pore of PilQ multimers. Pilus retraction is by the action of PilT. Source

When it comes to stalling force (the force at which re­traction drops by an order of magnitude), M. xanthus may be the winner, with a stalling force of ~150 pN. But N. gonorrhoeae is no slouch, with a previously reported force of ~110 pN. Whatever the details, the authors sta­te:"to our knowledge, the pilus motor is the strongest linear motor reported in the literature to date." By com­parison, the stalling force of an actin filament is 7.7 pN per filament, that of myosin 2.5 pN. But while both N. gonorrhoeae and M. xanthus may retract their pili with the same general amount of force and at similar velo­cities, there was a striking difference: when force is ap­plied to N. gonorrhoeae there is an increased likelihood of direction switching: the pilus stops retracting and be­gins to elongate. In contrast, applying force to a M. xan­thus pilus does not increase the likelihood of elongation.

Similar values for retraction strength and velocity suggest common machinery at work in two very different bacte­ria. Does the difference in direction switching reflect the different lifestyles of a soil-dwelling microbe and a hu­man pathogen? T4P systems are employed by a wide va­riety of bacterial species. Certainly studies that investi­gate this mechanism in other twitching bacteria will further expand our knowledge of T4P retract­ion across diverse bacterial lifestyles.

Amber is a Graduate Research Assistant in the Ruby Lab at the University of Wisconsin, Madison, and the host of a blog that also features The Small Things: Tiny Topics.