A Close Encounter of the Enological Kind

This article is adapted from one published in the January issue of the magazine Wines and Vines, with permission of the publisher and the author. Microbiologists with epicurean interests in microbiological end-products would do well to become acquainted with this magazine. 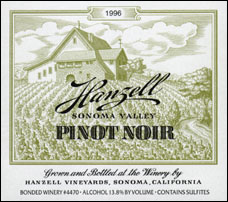 Early in my career, by good fortune, I encountered the ma­lolactic fermentation. Investigating it by standard microbiological methods led to results that changed the way California red wines are made, for the better most agree. How satisfying it is to think that I was following in the footsteps of Pasteur, no less, and his early career encounter with wine making.

The story started when a highly skilled wine maker, Brad Webb, was freshly hired by James D. Zellerbach of paper and ambassadorial fame shortly after building the fabu­lously beautiful, Hanzell Winery in Sonoma County, California. Brad was given his complete in­structions in a bottle. Zellerbach presented a bottle of Romanée Conti Pinot Noir telling him, “This is what I want.”

The winery, nestled among new hillside plantings of Pinot Noir and Chardonnay, was meticulously built in the Burgundy style. Made of native stone, with resident moss kept intact during construc­tion, its walls were maintained lush and verdant with distilled water (tap water would have left an unsightly white crust). The lampshades on interior lights were French, double-lobed, grape-picking baskets. But much more relevant to his ambitious goals were the custom stainless steel equip­ment (such as temperature-controllable fermenters fabricated to Brad’s specifications), French oak barrels, and nitrogen-protecting bottling capabilities. This impressive combination of quality facilities along with Brad’s skills and dedication paid off handsomely. He made superb Pinot Noirs and Chardonnays, recently making Wines and Vines’ list of “Wines that Changed the Industry.” 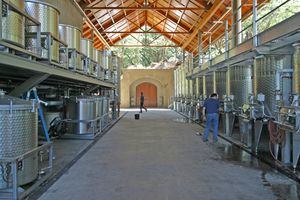 Some of the stainless steel equipment at Hanzell Winery Source

But not at first. Brad’s initial Pinot Noir wines, made from purchased grapes, refused to undergo what is known as the malolactic fermentation, an alarming and perplexing disappointment to him. Alarming, because Brad well knew that the malolactic fermentation, by converting malic acid to the less-acidic lactic acid and CO2, not only adds flavor components, but is the sine qua non for conferring the softness and subtle flavors of a quality Pinot Noir. And it was perplexing because grapes from the same vineyards regularly underwent the fermenta­tion in other cellars. He tried a number of maneuvers, none of which worked. Even wines that had undergone the malolactic fermentation elsewhere failed at Hanzell. Using such wines to inoculate batches made at Hanzell didn't work either. Brad was exasperated, but he realized that malolactic-free Hanzell offered the opportunity to research the fermentation and solve his dilemma.

Malolactic fermentation in California had a long, solid reputation for capriciousness and indepen­dence. Most winemakers of the era became aware that the fermentation was underway only when tanks of wine began to rumble softly, usually in midwinter. Winemakers didn’t start it; they couldn’t stop it; it just happened. But why only then? Malolactic fermentation seemed to have a mind of it own.

Knowing that I, then an Assistant Professor of Enology at UC Davis, was venturing into the micro­biology of the malolactic fermentation, Brad dropped by to see me. He offered Hanzell as a nega­tive control for experiments on spontaneous malolactic fermentations. This began a brief but richly rewarding collaboration as well as a warm friendship. I began my studies by searching for bacteria capable of causing the malolactic fermentation. From samples of dry wines and lees collected at seven California wineries, I had isolated about 50 strains of lactic acid bacteria (the parent class to which malolactic acid bacteria belong). The isolates proved to be a diverse lot, re­presenting all four major types of lactic acid bacteria: rods and cocci that did (heterofermentative) and did not (homofermentative) produce gas from glucose. But strikingly, all were able to utilize malic acid in laboratory culture, converting it readily to lactic acid and CO2. That is, all were meta­bolically able to mediate a malolactic fermentation, at least in the benign environment of labora­tory culture. But individual samples almost always contained only a single type, suggesting that these bacteria weren’t randomly spread throughout wineries. Only one established itself and be­came dominant.

Brad and I evaluated all 50 of these “ML” strains for their ability to grow and remove malic acid from fresh and partially fermented must. We selected number 34, the most vigorous, for further studies. ML-34 had been isolated from a sample of Barbera (as I recall) that I had taken from a redwood tank at Louis Martini’s winery in Saint Helena. Louis was welcoming and fully coope­ra­tive, but preferred that his winery not be identified as the source of this bacterium. Bacteria in wineries didn’t project a positive image. After all, they are the bête-noir, causative agents of Pas­teur’s “maladies des vins.”

In 1959, Brad and I took ML-34 to Hanzell to study it under winery conditions. There, we added 100 ml of a culture to 4 gallons of freshly pressed grape juice (must). Two days later all its malic acid was gone. It worked. In various assays and with different grapes, malolactic fermentation was complete in 21 days.

We were delighted. We were, we believed, the first to induce a malolactic fermentation from a pure culture of a known strain of a bacterium. It turned out that others in Europe had achieved the same thing somewhat earlier. And to our satisfaction, we had learned how to control malo­lactic fermentation.

What was the key to this control? Why hadn’t the malolactic fermentation occurred spontaneously at Hanzell as it did so readily elsewhere? That seemed obvious enough. There were no resident malolactic bacteria in these new sanitary facilities. But why had an inoculum from a malolactic-fermented wine failed to induce a fermentation at Hanzell? Certainly the wine must have con­tained malolactic bacteria. We found several reasons, the main one being that ML-34 needed many growth factors. Now, it turns out that when yeasts stop growing, they glean growth factors from their surroundings and store them inside their vacuoles until they have nutritionally impov­er­ished their environment. The trick, then, was to add ML-34 before, not after, the yeast fermen­tation took place, and thus before the yeast had sequestered the needed growth factors. 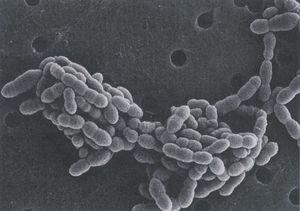 Nothing is absolute when dealing with the rich complex­ity of wines as well as the numbers and condition of bac­terial cells used as inocula for malolactic fermentations. Subsequent investigators have experienced little diffi­culty starting malolactic fermentations in finished wines. But the ability of yeast to deplete must of nutrients es­sential for malolactic bacteria has also been established. Over the years, ML-34’s name changed, becoming in­creasingly more elegant and wine specific. It eventually graduated to Oenococcus oeni (from the Greek, oinos, for wine).

In spite of their important contributions to wine quality, malolactic bacteria have not escaped suspicion and criticism. As they convert malic acid to softer lactic acid and CO2, they marginally increase volatile acidity, and they decarboxylate some amino acids forming corresponding amines. For example, they convert histidine to histamine and tyrosine to tyramine. These amines induce allergy-like symptoms. Although their concentrations in wine are minute, some speculate that accumulation of histamine and tyramine could present a hazard for persons taking antide­pres­sants that inhibit monoamine oxidase, the enzyme that metabolizes these amines. On the plus side, we should remind ourselves that the delightful Portuguese vinho verde wines rely on the CO2 from a malolactic fermentation for their slightly sparkling spritz of “pétillance”. It’s a mystery why California vintners have never accepted this other gift that malolactic bacteria proffer.

Outside the wine world malolactic bacteria have attracted attention for their remarkable ability to scrape by on very little energy. A number of bacteria are well known energetic misers, but malo­lactic bacteria might well be the world-record holders among heterotrophs. The conversion of malic acid to lactic acid and CO2 releases only about a third of the energy needed to generate a single molecule of ATP. By pushing one proton (hydrogen ion) out of their cell each time they utilize a molecule of malic acid, malolactic bacteria incrementally accumulate a reserve of poten­tial energy until they have enough to make a molecule of ATP.

Important as it is to the winery, that’s not malolactic fermentation’s only home. It occurs wherever appropriate lactic acid bacteria (and most are) encounter malic acid or malate. One such venue is our mouths. Streptococcus mutans, the causative agent of dental caries, which most of us host, is an example of a lactic acid bacterium that mediates that conversion. So each time we ingest malic acid-containing foods, principally fruits and vegetables, we carry out our own malolactic fermen­tation. Thus, ingested malate exerts an alkalizing effect right at the site of incipient caries forma­tion. Some dental researchers reason that the resulting neutralization helps to control dental caries, yet another of the fermentation’s gifts.

If bacteria capable of the malolactic fermentation can be found almost everywhere, even on our teeth, what’s special about Oenococcus oeni? It’s special because it can grow in wine. It tolerates wine’s low pH and considerable alcohol content. O. oeni probably achieved these abilities rather quickly in evolutionary terms because we now know that it’s an exceptionally rapid evolver. But that’s another intriguing aspect of its complex and still expanding story. We’re just pleased that it did. Upon retirement from UC Davis as Professor of Microbiology, John took up writing and consultation in biotechnology. His latest book, March of the Mi­crobes: Sighting the Unseen, which takes a bird-watcher’s approach to mi­crobiology, will be released by Harvard University Press in February.