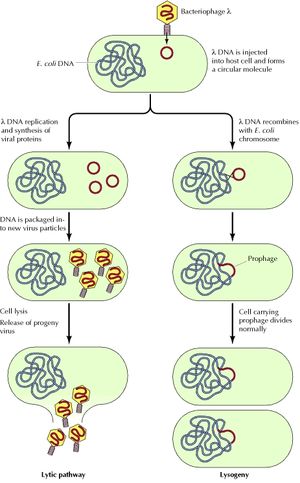 A phage at the crossroads. Lambda (λ), the intensely studied temperate phage of E. coli, chooses between the lytic path­way and lysogeny. Source

Lysogeny­ – a nasty time bomb or a mutually beneficial sym­biosis? A prophage gone lytic will murder its host, but a symbiotic picture can well be argued. Here are some thoughts about the ongoing give-and-take. More details are still emerging.

1. If you are a phage, why be temperate?

For a phage, temperance offers the obvious advantage of providing a safe haven when host cells are few and far be­tween or when conditions are not good for their rapid growth. Indeed, one does find more lysogens in nutrient-poor environments or during winter months. While nes­tled within a host chromosome, the prophage is faithfully replicated pari passu with host DNA. If the host clone prospers, so does the prophage. Here the prophage is protected from the heat-labile factors (proteases secre­ted by bacteria?) that can chew up a virion. Even while inside an intact virion, the phage DNA can be damaged by UV light. In sunlit waters, the number of infective vi­rions is typically less than the number of intact virions, the difference being accounted for by virions that contain UV-damaged DNA. Prophages are also subject to UV da­mage, but being a segment of the host chromosome the damage is often mended by the host's DNA repair machinery. Of course, there are trade-offs here. Lysogeny eliminates the risky busi­ness of extra-cellular survival and locating a host, but one hungry protist can end the game for all concerned.

2. If you are a bacterium, why tolerate a prophage? 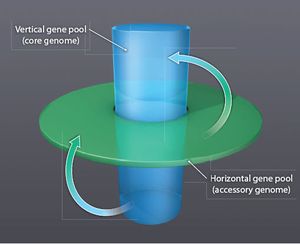 Having a prophage on board burdens you with more DNA to be replicated and with a passenger that just might kill you should conditions change. But said pro­phage protects you from infection by related phages and often supplies genes of immediate usefulness. Good ex­amples of the latter are prophage-encoded toxins and other virulence factors, such as those essential for the pathogenesis of V. cholerae, E. coli O157, and C. diph­theriae. Even the temperate lambdoid phages of E. coli provide genes that make their hosts resistant to killing by serum complement. Some adaptations of nonpathogenic bacteria to a specific ecological niche almost surely also rely on useful prophage genes. It is thought that most of these genes had been acquired from previous hosts. Their conveyance by phage is central to horizontal gene transfer among prokar­yotes.

This role of prophage as a source of new genes is of colossal importance. Bacterial genomes are composed of a core genome shared by virtually all members of a species, plus a halo of strain-specific genes. Prophage (along with related genomic islands) appear to be a primary source of these defining genes.

3. How do prophage genomes evolve?

Looking at this evolutionarily, one would not expect an entire prophage to become fixed in the bacterial genome since it is only the rare prophage gene that increases host fitness. If any of the prophage genes necessary for induction are inactivated, all the better for the host. The time bomb has been defused without the loss of potentially useful genes. (Click here for a paper about an ar­chaeal prophage that has lost the ability to excise but still protects its host from viral infection and, under conditions of starvation, makes a lytic enzyme that lyses the host.) Once the prophage can no longer go lytic, its genes are released from selection pressure and gradually decay. Thus, in hindsight, it is not surprising to find many bacteria carrying noninducible prophages that have suf­fered varying degrees of gene loss. The rare useful genes, typically ones picked up by the phage from a former host, may become part of the host genome – testaments to horizontal gene transfer. 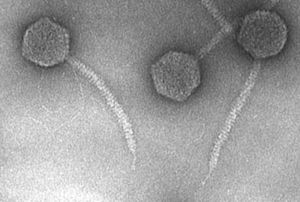 Prophages account for a significant fraction of the host genome, especially in pathogens. E. coli O157:H7 strain Sakai contains 18 prophage elements that total 16% of its DNA; the 4-6 prophages found in Streptococcus pyogen­es make up 12% of its genome. The percentages in non-pathogens are lower, but still prophages contribute many genes to the lysogen. Early studies on a few model sys­tems (the temperate lambdoid phages of E. coli in parti­cular) suggested that most prophage genes are repres­sed, that only the few regulators needed to maintain ly­sogeny are transcribed. When more lysogens were scru­tinized, more prophage genes were found to be active during lysogeny. In some cases transcript­ion is up- or down-regulated in response to changes in host state or environmental conditions. Expression of some prophage genes is under host control, such as the diphtheria toxin gene that is governed by the same mechanism that regulates the expression of some bacterial genes in the presence of iron. In free-living bacteria, transcription of some prophage genes of unknown role (morons) is constitutive.

5. How common is lysogeny?

Many numbers are bandied about. Of all terrestrial bacteria cultured as of 1987, 47% were report­ed to be lysogens. A 2008 paper estimated that 60–70% of all sequenced bacterial genomes con­tain prophages. Those with 6 or more are mostly pathogens. Prophages are less common in Ar­chaea and in bacterial endosymbionts that have undergone pronounced genome reduction. All of these numbers are best viewed as approximations. Since formerly active prophages in varying stages of decay can linger in the host genome, when does a decaying prophage cease to qualify as a prophage? This is like asking when that burrito you had for breakfast ceases to be a burrito. Should one count only those prophages that can be induced to enter the lytic cycle by mitomycin C or UV irradiation? By that criterion, roughly half of the marine bacterial isolates contain pro­phages. This gives you some idea of how many bacteria likely harbor active prophages that might be induced under various environmental conditions.

Suppose that you want to know how many bacteria carry prophage genes, not just those with in­ducible prophages. For bacteria whose genome has been sequenced, the first step would be to scan their genome using ab initio gene prediction software to locate every potential gene – an im­perfect business in itself. Next, use BLASTx to compare the ORFs, one by one, to all known phage genes. When you find an ORF that has significant similarity to a phage gene, closely examine its neighborhood for more phage-related genes. Find a cluster of phage-related genes and you might have located a prophage genome. One major flaw here: all of the currently "known" phage genes are estimated to represent less than 0.0002% of the total number in existence. So a lot of propha­ges and prophage relics can be missed.

You could instead zero in on one particular prophage gene. For example, all active prophages en­code an integrase (the enzyme that catalyzes the insertion of the prophage into the host genome). Integrases can be efficiently detected by in silico analysis, but spotting an integrase does not ne­cessarily mean you've found a prophage since integrases are used by other types of mobile ele­ments, as well.

So to answer the original question, we don’t know exactly how many, but there are a lot of lyso­gens out there, and prophage relics abound.

Meanwhile, a sixth and clearly unanswerable question has come to mind. If lysogeny is so great, why aren't all bacteria lysogens? John Paul offered some thoughts on this. Phages typically have very narrow host ranges. Thus, when a prophage protects its host from infection by related pha­ges, this may protect it from virtually all infection. It follows that as the percentage of lysogens increases, it becomes more and more unlikely that a phage virion will meet up with a susceptible host. At some point, the phage population would decline and lytic in­fec­t­ion would come to a halt. That might sound like a boon for the bacteria, but not really. In aquatic environments lytic infect­ion plays an important evolutionary role by fostering bacterial diversity through "kill-the-winner" dynamics. Paul posited that it may be that one could not have more than half lysogens and still keep lytic processes and kill-the-winner ongoing. And about half is what we have.