« Prophage Masquerade | Main | The Next Generation (Or Two) » 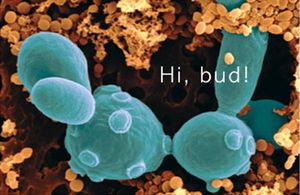 Binary fission is a most impressive invention. In one fell swoop, it ensures that progeny cells are born alike and endowed with the same potential for growth and survival. Simple as it sounds, it must have taken considerable evolutionary contortions to make it function so well throughout the living world. But there are cells that have adopted an alternative mechanism, where cell division is asymmetrical, where one progeny cell is made from a “mother cell” that keeps generating “babies.” The best known example is, of course, budding in yeast. But other cells also arise in this fashion, including some bacteria, the sexual spores of mushrooms, and even some plant cells. 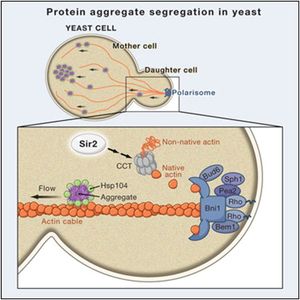 The polarisome in a forming yeast bud. Actin cables growing out from the polarisome transport protein aggregates to the mother cell. Source

So, is there an advantage to bypassing binary fission and budding instead? It would seem that way. Recent work from Tom Nyström’s lab has shown that proteins that become damaged in the course of cell growth flow back into the mother cell and leave the young bud free of such impediments. The damage to proteins is often due to oxidation by reactive oxygen species. Damaged proteins tend to form aggregates. This can be bad, getting rid of them is good. How do these proteins accumulate in the mother cell? Interestingly, protein aggregates hitch a ride on actin filaments that grow from the growing bud to the mother cell. Such filaments are assembled at the tip of the bud in a structure the authors call a “polarisome,” which is made up of core proteins plus some involved in actin polymerization (formins). Also required is the age-retardant deacetylase, a protein called Sir2 and aka sirtuin. Previously known as a life span modulator—not just in yeast but in worms, fish, and mammals as well—Sir2 has now been found to also be involved in actin-related processes, hence in polarisome formation. It gets more complicated. For an overview, we suggest a commentary by Guarente. 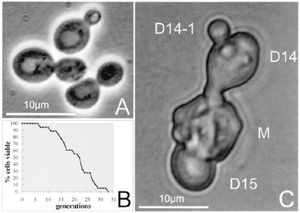 A Exponentially growing young yeast cells to compare their size and morphology to that of old cells. B A typical lifespan determination. The number of budding cycles that each of a set of 50 ‘virgin’ cells undergoes before it stops dividing was determined by micromanipulation and counting of budding cycles. C M is the terminal mother cell after 15 cell cycles. Note the enormous size as compared to young cells and the surface changes. D14 is the second but last daughter that did not completely separate from the mother and did not give rise to new
living cells. Source

Now let’s look at this story in a broader context. It’s not just about shipping dirty laundry off to mother. One consequence of the asymmetry of budding is that the mother cell retains its bodily integrity bud after bud, whereas this is lost when a cell divides by binary fission. In yeast, a mother cell can bud some 15-30 times, after which it conks out. How do we know? Counting the number of times a cell gives off buds is done patiently under the microscope, using a micromanipulator to remove each daughter cell once it separates from the mother cell. Keep this up until the mother cell gives off no more buds. Imagine teasing the new cells away for the mother cell 30 times or so! (This seems to have been done first in 1950 by A. A. Barton, working for a British brewing company.) This phenomenon is called senescence, and is visually illustrated by wrinkles of old age and the unusually large size of the Grande Dame. Newly formed cells start the process anew, each daughter cell becoming a mother cell of its own. However, in time, the newly made cells are less competent for further budding. Not surprisingly, yeast is a favorite for studies of cell polarization and its possible role in senescence. Many papers have been written on this subject.

A favorite connection between yeast budding and aging relies on a 120-year-old theory by August Weismann. He postulated that aging evolved from the need to separate germ cells from somatic cells. Germ cells need to be protected from damage; somatic cells can ”take it.” One of the reasons given is that additional resources must be bestowed on germ cells to ensure their genetic stability. Somatic cells, in contrast, do not have such mechanisms and thus accumulate damage.

This is one way to think about asymmetric cell division. Formally speaking, the mother cell acts as a somatic cell that produces multiple germ cells, the buds. Each, when grown, becomes a mother cell with full reproductive potential, able to produce a full complement of buds of her own. During budding, the young bud escapes from the cell damage represented by the aggregated proteins, thus foiling at least that aspect of cell aging.

If asymmetric cell division affords such protection of the germ line, why don't all cells do this? The question is not terribly relevant to multicellular somatic cells, given that they are not involved in germ line propagation (unless some investigator teases their nuclei out and introduces them into eggs). But how come more unicellular microbes haven't adopted the budding strategy? That is a question for another time.

Given that yeast is the best known of all eukaryotic organisms, allowing endless kinds of genetic manipulations, it’s no wonder that it has become a model for the study of aging. And here I thought that I would be a good subject for researching what happens in old age!

Addendum: As Qetzal noted (see his comment below), I could have mentioned that a possibly analogous phenomenon has been reported for bacteria. When E. coli divides, the "old" cell pole accumulates chaperones involved in the aggregation of (presumably) damaged proteins. Eventually the "old" cells lose their reproductive capability. Something analogous takes place in Caulobacter crescentus. Thus, bacteria may also use the strategy of segregating damaged proteins in aging cells, to the advantage of the population as a whole.