By default, a membrane-bound entity like a cell should be a spherical, formless blob. However, most cells are not such formless blobs, but rather have adopted one or more forms from a vast repertory of stunningly complex morphologies. To wit, see (and admire) the radiolarians, metazoan neurons, giant parabasalians or the endlessly weird and sophisticated ciliates. Even prokaryotes have a highly complex cellular structure, and are not, as some biochemists are prone to think, mere bags of enzymes. The deeper you venture into the realm of cellular diver­sity, the more awe-inspiring becomes the cornucopia of cellular structural and morphological variety. Luckily, there is some order to it as there are two fundamental 'genres' of cellular morphology, at least in the protists: flagellates and amoebae. Of course, there are also cysts, but since those are mostly resting stages (being a round ball isn't particularly helpful while feeding or fleeing from predators...) they can be ignored for now.

Cell shape depends on the cytoskeleton. As you know, its two main component systems are actin and tubulin, ignoring the plethora of miscellaneous proteins that are used for various structural jobs. Tubulin makes microtubules, the spindle fibers of mitosis, but is also important for the fla­gellar apparatus (we've yet to find one composed of actin and probably for good reasons). You al­so know that actin is a key player in cell motility and morphology in animal systems. It is also hea­vily involved in endomembrane trafficking within a cell, as well as endo- and exocytosis. If inter­ested, a recent issue of Science has a nice overview of actin in morphogenesis and cell movement. 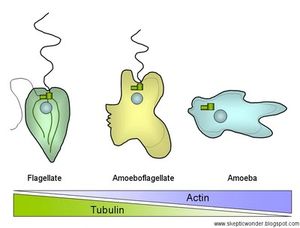 The role of the cytoskeleton in morphogenesis is much less clearly defined. It depends largely on the species. Plants, for example, rely very heavily on tubulin for mor­phology, with actin being a minor player. Amoeboid cells are primarily actin-based. In fact, amoeboid cells resort to tubulin largely for spindle formation during mitosis. They hate tubulin about as much as plants hate actin. Actin-based cells don't have to be amorphous; they are still able to achieve complex morphologies. But there is a positive correlation between amoeboid-ness and actin-ness ('actinity'?).

In contrast, flagellates are primarily tubulin-based. Of course, they still use actin for some intra­cellular work, but the shape depends largely on the whims of their microtubules. Perhaps not relying much on flagella allows the amoeboids to dispense with the microtubule organization pathways, thereby switching to actin. Flagellates, relying heavily on intact tubulin systems, may be less prone to losing their structure. Also, if you're a flagellate, you need shape for a modicum of streamlining. Try swimming around as a formless or floppy blob of some sort! Keep in mind that life at that scale is very different. Viscosity calls the shots when considering unicellular motility. Perhaps being hydrodynamic isn't even as important as simply retaining shape. Otherwise you'd be like a blob of molasses trying to swim through a sea of maple syrup. Not gonna get very far.

Whatever the reason, amoeboid cells tend to have a predominantly actin-based cytoskeleton, fla­gellates have a penchant for tubulin. Of course, not all organisms are decisive enough to make this commitment, so we've got amoeboflagellates in the middle.

Plenty of other organisms fancy transitioning between being more amoeboid or more flagellate. But few cells actually dispense with flagella and basal bodies altogether, to form them anew when special conditions arise. It's time to introduce one that does.

And before someone accuses me of focusing on bio­me­dically relevant organisms, Tetramitus, another Heterolobosean, does it too, and has more flagella to oogle at.

(Click to enlarge) Dramatic trans­for­mation of Tetramitus between amoeboid and flagellate forms. Source

The nice picture of the Tetramitus flagellate form at the beginning of this post reveals its marvelous complexity. Keep in mind this thing was a 'formless' amoeba a few hours before. Quite a complex structure to be formed within a 4 hour period! Note that while the organelles seem to position themselves freely in amoeboid cells, they become substantially more fixed in the flagellate form. This one even has subpellicular microtubule bun­dles, a cytostome, and the oral groove characteristic of its 'kingdom,' the Excavata.

Because of Naegleria's pesky habit to occasionally get into human brains and eat them (oops!), it gets a lot more research attention (which, in the world of Heterolobosean biology, doesn't really mean very much). It should be noted that while there are some waves of Naegleraphobia out there, incidences of human infection are very very VERY rare (small handful of cases a year; some years without any cases whatsoever). Unfortunately, it is almost universally fatal, but so are more ubiquitous diseases. But that's enough excuse for the media to put up a scary article on Naegleria every once in a blue moon, often accompanied by an image of Amoeba proteus or Chaos spp. Hey, at least they're still eukaryotes!

Before we continue on with our hard core cell biology, let's clarify that Naegleria is not a parasite, but rather an opportunist that seems to not mind the 37 °C heat of the human body. It gets into the human brain through the nose, generally from swimming in warm water. Once inside, it de­vours the brain, inadvertently killing its 'host', but it does not require transmission to another host to live on. So Naegleria's gastronomic inclinations may well just be an accident, albeit a rather costly one to the few humans it infects. 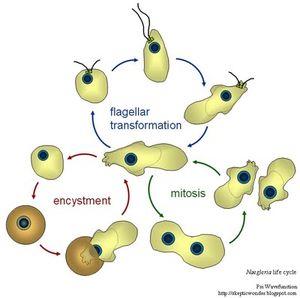 Summary of Naegleria's life cycle based on C. Fulton in Methods in Cell Phy­siology, Vol. 4. 1970. (Don't pay any at­tention to the portrayal of the flagellar root apparatus.)

Our exploration of Naegleria's life cycle begins with its dominant life stage, the eating and mitotically-able amoe­boid form. Interestingly, mitosis happens without basal bodies (like it does in land plants and diatoms). The ad­dition of water induces the flagellate form, which is ca­pable of feeding via its elaborate oral groove and cyto­stome, but not dividing. While an amoeboid shape is op­timised for a benthic environment (crawling on surfaces), excessively fluid environments favour the swimming fla­gellate. The third life stage is a resting cyst, which it forms and hibernates in when times are bad (e.g., drought). There seems to be no mention of a sexual life cycle, most likely due to this group being so understudied. (Each year brings us more and more evidence of sex in organisms previously thought to be asexual, with accumulating evi­dence suggesting sex is a shared eukaryotic feature.) Naegleria's life cycle conveniently involves all three fun­damental cell types, which is why it's such a wonderful system for studying the transformations between them (and cellular differentiation.)

The transitions between the principal cell morphologies involve the regulation of actin and tubulin monomer levels: that is, the amount and concentration of the 'building blocks' for each cytoskele­tal system. In fact, the reason many organisms encyst for mitosis (or at least reduce their flagellar length) is to redirect tubulin from the cytoskeleton and flagellum to form the mitotic spindle. Oth­erwise, you'd have to synthesise a bunch of new tubulin that would soon become useless. If you look at some images of Naegleria amoebae undergoing mitosis, you'll see that the cells are much rounder than normal.

There's probably also a regulation of the actin- and microtubule-associated proteins involved in cytoskeletal organization for each system (and the interactions between them), but that doesn't seem to have been studied at all in Naegleria. Simply synthesising tubulin is insufficient for any semblance of a well-organised cytoskeleton; auxiliary proteins are required to regulate the dis­tinctly non-random morphology of a flagellate. 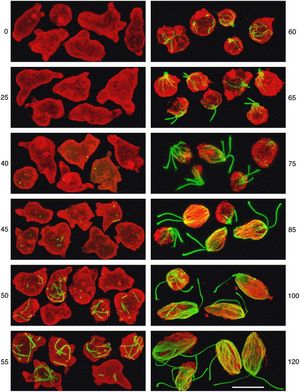 Changes in the actin and microtubule cy­toskeleton as amoebae differentiate into flagellates. Immunostaining of the cyto­skeleton: red = anti-actin; green = anti-α–tubulin; yellow = co-localisation of anti-actin and anti-α-tubulin. Time: 0 to 120 minutes. Bar: 10 µm. Note that these are different cells, as they had to be fixed (killed) for immunostaining. I would love to see a live cell timelapse of this pro­cess! Note how the flagellate morphology is 'molded' by the longitudinal micro­tubule bundles. Source

The Naegleria system could be fruitful for isolating micro­tubule-associated proteins and other microtubule regu­lators (e.g., via microarray chips). Considering the cyto­skeleton is the most exciting cell structure (fact), cell bio­logists should stop neglecting Heteroloboseans. We do know that the commitment to flagellation involves a ra­pid increase of tubulin production, since the amoeboid form has barely any of it.

Naegleria takes ~120 min at 25 °C to transition from an amoeba to a flagellate. The earliest event in this process is the initiation of tubulin synthesis, followed by basal body assembly 30 min later. Cells round up as actin fi­laments depolymerise, and basal bodies begin to sprout flagella at about the one hour mark. In another 20 min, the tubulin cytoskeleton is molded into the proper fla­gellar body shape, with flagella reaching full length at ~110–120 min.

Doesn't look like Naegleria has had its genome se­quen­ced yet, although ESTs and a draft for N. gruberi are un­derway. Of course, the other heteroloboseans are being thoroughly neglected. And yet we may be about to se­quence ten thousand vertebrate genomes.

Hopefully I've convinced you at least that Naegleria would make an interesting model for studying cell differentiation and transitions in morphology, as well as cytoskeletal dynamics. While the field is still miniscule – at least its non-clinical component – some work is being done right now on the regulation of cytoskeletal development in Naegleria (such as this paper on the localisation of mi­crotubule-related mRNAs), but not as much as you'd expect. I'm not aware of any other system that involves such a complete transition between three fundamental cell types. For studies of mor­phology, what more can you ask for? 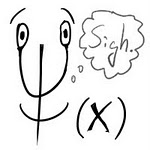 Yana, aka Psi Wavefunction, is an undergraduate in the Department of Botany, University of British Columbia, and the host of the blog Skeptic Wonder: Protists, Memes and Random Musings. Her original post on Naegleria presented on her own blog was adapted, with her permission, for publication here.