Rough work, iconoclasm, but the only way to get at truth.
—Oliver Wendell Holmes 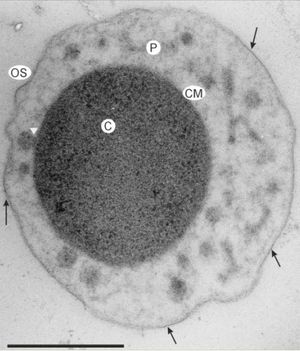 Biology is the iconoclast’s paradise. Over and over, cherished beliefs, some dating back for centuries, fall to the ground as exceptions to the rule are discovered. To the long list of such exceptions, we now add the finding by groups in Regensburg and Frankfurt that the outer membrane of an archaeon, Ignicoccus hospitalis, is energized and capable of generating ATP. Granted, this is a hyperthermophile who helped shatter the ancient belief that life at high temperatures is not possible, thus hardly a conformist. But this discovery is, to say the least, unexpected.

The old tenet is that the energetic business-end of pro­karyotes is the cell membrane, whether surrounded by an outer membrane, as in Gram-negatives, or not, as in Gram-positives. I should know, I taught this for umpteen years. True, in Gram-negatives, energy can be transmit­ted to the outer membrane via the Ton system (a system that provides energy for the transport of iron siderophor­es, vitamin B12, and some colicins), but the reverse, making energy on the outer membrane and sending it to the cytoplasm, is not part of the old belief. Yet it’s been known for some time that a goodly number of bacteria can energize their outer membrane. They do this by having cyto­chro­mes inserted in the outer membrane where they carry out a process known as extracellular elec­tron transfer. This ability stands the organisms in good stead, allowing them to utilize metals in rocks as electron acceptors.

Localization of A1Ao ATP synthase on I. hospi- talis cells in ultrathin sections. (A) Labeling with antibodies against the purified ATPase complex, (B) Labeling with antibodies against the membrane-bound subunit a. For both images the secondary antibody with ultrasmall gold particles is visualized. C = cytoplasm. IM = inner membrane. V = vesicles in the pe­riplasm. OM = outer membrane. Source

First of all, dual membrane systems have not be found in archaea other than Ignicoccus. What are the new conclu­sions about power generation in its outer membrane based on? Mainly on immunoelectron microscopy of sections using gold-labeled antibodies and immunofluor­escence, which revealed that ATP synthase and H2:sulfur oxidoreductase are located entirely in the outer mem­brane. These two en­zymes are required for energizing membranes and for ATP production. Thus, ATP can be expected be made in the outer membrane and released into the periplasm (which in this organism is huge – lar­ger than the cytoplasm). You may ask, are these two enzymes also found in the inner membrane? The answer is no. Since the periplasm is so large and the two mem­branes so far apart, enzyme localization to one mem­brane or the other can be readily discerned. This introduces the question: which is the cytoplas­mic membrane in this organism? The figure tells you something about the rare structural com­plexity of this organism. Note that the two membrane system is different from that of ordinary Gram-negatives, as here the outer membrane is not known to contain LPS or porins. 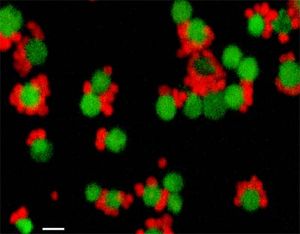 Is the Ignicoccus story relevant to other prokaryotes? Who's to say at this point. Ignicoccus is mightily idiosyn­cratic, e.g., it's unique among archaea in having a two-membrane system. Not only does it grow at very high temperature and use reduction of elemental sulfur as its main energy source, but it also lives in intimate asso­cia­tion with another archaeon, the smaller Nanoarchaeum equitans, which has a reduced genome and apparently gets its energy from its larger partner. The unusual ig­nicoccal ability to make ATP within its periplasm may help it to supply ATP to its associates across the outer membrane.

The authors propose a tantalizing notion: if the eukar­yotic cell arose by an archaeon having swallowed a bacterium (hold on, we’re not getting into that discussion right now), then Ignicoccus or something like it would have been the ideal ancestor, able as it appears to be to donate ATP to anyone residing within its boundaries. True or not, one should further respect the outliers in the biological scheme of things as potential sources of novel and deeper relationships.