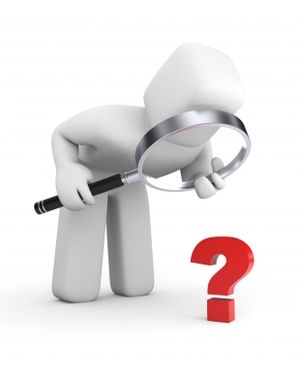 Roseovarius nubinhibens recently joined the exclusive club of about a thousand bacteria whose genomes have been sequenced. Why this honor? It’s a member of one of the most ubiquitous and most intensely studied clades of α-Proteobacteria, the marine roseobacters. This populous group participates in important jobs, including the global cycling of sulfur, climate regulation, and even modulation of our day-to-day weather. (For the latter, see our earlier post.) To appreciate the sulfuric importance of R. nubinhibens in particular, we need to begin with the major quantities of dimethylsulfoniopropionate (DMSP) made by marine algae for whom it serves as an osmolyte. Roseobacters then enter the picture, their work being to break down the DMSP by either of two pathways. One route converts DMSP into volatile DMS that can give rise to sulfate aerosols that act as cloud seeds. The other pathway leads to methanethiol, a primary sulfur source for marine bacteria. The relative amount of sulfur that flows each direction matters. R. nubinhibens was one of the first bacteria found to be able to carry out both conversions, thus is a potentially important switch point. The researchers reporting its isolation (José González and colleagues in Mary Ann Moran's lab) dubbed their new species Roseovarius nubinhibens (from the Latin nubes, for clouds, and inhibens, for inhibiting). 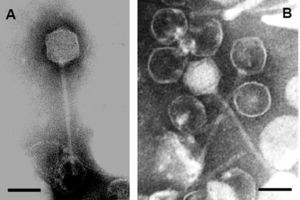 Virus-like particles generated by mitomycin C induction of R. nubinhibens ISM. Siphovirus particles are commonly seen in the induced lysate, and many of them appear to be “empty.” Bars = 50 nm. Source

The R. nubinhibens genome has been sequenced. Any prophages on board? A routine search using Prophage Finder (software that looks for clusters of phage-related genes) turned up several candidates. Let's refine the question and ask whether there are any inducible prophages on board. Add mitomycin C (a potent DNA cross-linker) to a growing culture and wait 24 hours. Voilà! You get ~1010 VLPs per ml compared to ~105 for control cultures. (What is a VLP? It's a Virus-Like Particle, i.e., something that looks like a virus but hasn't been shown to infect like a virus.) The induced VLPs have the long, flexible tails and polyhedral heads characteristic of siphoviruses, but most of these VLPs are empty-headed and/or have broken tails, suggesting that many are defective.

Was one of the predicted prophages the source of the VLPs? The DNA strands inside the VLPs were shown by pulsed-field gel electrophoresis (PFGE) to be about 30 kb, suggesting that the prophage might be about the same. None of the predicted prophages were near this size. So the researchers then searched the genome for any phage-related genes. They were lucky. They found an integrase gene along with a few other recognizable phage genes in a 27 kb region that Prophage Finder had overlooked. They concluded that they had found the prophage associated with the VLPs because they identified a gene in this stretch of DNA that encodes a major capsid protein and showed it to be identical to the capsid gene in the VLP DNA.

So what else does that prophage DNA encode? A few genes required for the prophage life cycle could be tentatively identified. Of the 28 genes that had significant hits in the GenBank database, 25 are most similar to genes of unknown function previously found in Rhodobacterales bacteria. Might those 25 "bacterial" genes actually be phage genes that are part of the unsequenced majority and that are residing in prophages? No wonder Prophage Finder — looking as it does for known phage-related genes — didn’t find the real prophage! Since more than 99.9% of phage diversity has not been captured in any database, hunting for prophages with Prophage Finder is like going birding with a field guide that includes less than one species out of a thousand.

Other sequenced members of the Rhodobacterales harbor related prophages, suggesting that this type of prophage is common and may be active in horizontal gene transfer (HGT) among these bacteria. Tantalizingly, there may be a subplot to this story, with even more HGT going on. The PFGE analysis of the VLP DNA also found a few short segments of 3, 4, and 12 kb. The authors suspect that these may be random bits of host DNA packaged inside capsids, i.e. gene transfer agents (GTAs). (For our earlier post about GTAs, click here.) GTAs transfer genes between members of the same species. Their production is controlled by the bacteria, and neither viral infection or cell lysis is involved. GTAs have been found only in α-Proteobacteria, with a particularly high incidence among the roseobacters. Previously, 21 of the 22 sequenced members of the marine Roseobacter clade had been found to carry the genes for GTA production; now R. nubinhibens makes it 22 out of 23.

What do GTAs have to do with prophages? Did one evolve from the other? If so, in which direction? In the words of two researchers in this field: The overall pattern of relationships between these various GTA, phage and prophage elements supports the notion of a continuum of sequence relationships resulting from transfers throughout a global phage gene pool. And we have barely dipped our toes into that global pool.