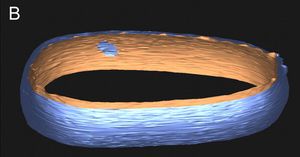 When time's up, an infecting phage lyses its host cell, thus releasing the assembled virions. (See our previous post for more about lysis.) This process has been intensively studied in the coliphage λ. Here the phage-encoded holin proteins are said to "permeabilize" the E. coli membrane, thus allowing the endolysins accumulated in the cytoplasm to pass through and attack the cell wall. "Permeabilize" has such a polite sound, suggestive of an orderly modification of the membrane to allow the folded endolysins to quietly slip through. But what sort of channels or pores do the holins actually make?

First of all, the holes have to be large — large enough to pass the folded 18 kDa endolysin protein. That means they have to be way larger than the largest channels known for bacterial cell membranes, which are the 5 to 9 nm diameter channels formed by the twin-arginine translocation pathway (Tat). To gauge the size of the holin holes, researchers fused a series of protein domains of varying sizes to the C-terminus of the endolysin and tested the ability of the chimerae to exit through the cell membrane. A fusion protein almost 8 times the size of the endolysin passed right through and so did tetramers of that protein. The holins aren't very exacting gate-keepers, either. When the holes made by one phage were tested using endolysins with different folded structures from different phages that infect unrelated hosts, the endolysins exited as usual.

Together with other lines of evidence, these findings suggest that the holins don’t form a structured channel, but instead generate a radical disruption of the membrane. Success in visualizing the holes came recently when researchers combined cryo-EM with some other tricks. Cryo-EM requires rather thin objects, so they grew their E. coli strains on succinate as the carbon source, thus netting an 80% reduction in cell volume relative to that in LB. They engineered E. coli strains that could be induced to express the holin either with or without the endolysin. (These strains lacked the phage proteins needed to disrupt the outer membrane, so that membrane remained intact.)

Cells expressing both holin and endolysin lysed about 50 minutes after induction. Those without the endolysin remained intact but ceased growth at that same time, suggesting that the holins had done their work and made holes in the membrane. Samples collected at 60 minutes were plunge-frozen into liquid ethane and imaged under liquid nitrogen temperatures without any further manipulation. A close look at cells expressing holin but no endolysin revealed gaps in the inner membrane, an average of two per cell, at apparently random locations. These gaps are huge! Their average size was ~340 nm, the largest was 1.2 µm. This is more than 10-fold larger that the largest membrane lesions known — the ~30 nm pores formed in cholesterol-containing membranes of animals by cytolysins.

Much mystery remains. As the holins accumulate in the membrane, they have no apparent effect on the host until the instant when they "trigger" hole formation. Just how they "trigger" or form the hole is not known. However they do it, this is a skill shared by an exceedingly diverse array of holins belonging to more than 50 unrelated protein families. There is as yet no direct evidence that the holins themselves form the holes, but more appealing scenarios are hard to come by. It is known that about a thousand λ holin molecules are sufficient to rupture the E. coli membrane. Based on their size and predicted conformation, a thousand of them sitting side-by-side could make the two holes these researchers observed per cell.

So far, the authors' attempts to localize fluorescently-tagged holins in the lesions have been blocked by technical problems. This and other strategies are on their agenda. In their words: It is hoped that these approaches will provide further insight into the mysterious mechanism by which the holin manages the temporally scheduled transition between the perfectly maintained membrane integrity of the prehole state and the massive membrane holes described here.