All Is Fair in Love and Warfarin

by Shigeki Miyake-Stoner and Spencer Diamond 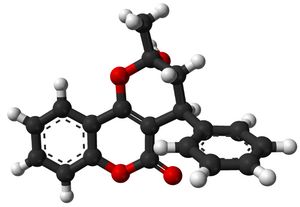 Warfarin, up close and personal. Source

It turns out the drug warfarin has nothing to do with war, but it does involve a recently discovered link between bacteria and humans. Warfarin derives its name from WARF, the Wisconsin Alumni Research Foundation where it was first developed, and -arin from its coumarin-like structure.

Warfarin is used in two roles: to kill pests, and to save human lives. It was first designed for use as a rodent poison, an anticoagulant that would cause mice and rats to gradually hemorrhage and bleed to death internally. Some years later, it was realized that this drug would be useful for humans too! Patients susceptible to dangerous blood-clotting or thrombosis can take appropriate amounts of this drug to "thin" their blood. Warfarin works by inhibiting Vitamin K epOxide Reductase (VKOR), an enzyme that recycles vitamin K after it acts as a cofactor in activating clotting factors. Now you might ask, what does this have to do with bacteria? Well it turns out bacteria have more in common with mammals than we thought! 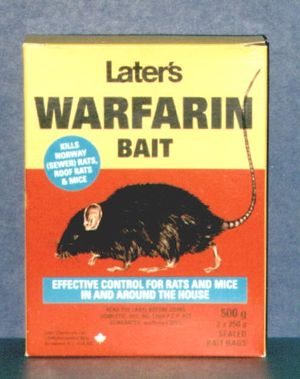 A VKOR homolog was identified in Mycobacterium tuberculosis (Mtb), the bacterium responsible for human tuberculosis. Why might this bacterium have a VKOR? Surely it doesn't need to regulate its blood clotting. Mycobacterial VKOR (MtbVKOR) is involved with making disulfide bonds in proteins, and is quite important for the bug's life processes. A recent paper by Dutton and colleagues investigated the role of MtbVKOR in bacteria.

Knocking out the gene encoding MtbVKOR severely affected growth of Mtb. So did growing Mtb in the presence of warfarin. The authors had previously noted that adding this gene to E. coli restored flagellar function in a mutant lacking the cell-envelope protein DsbB. Since they knew that DsbB is an enzyme involved in forming disulfide bonds, they performed experiments to see if MtbVKOR had the same activity. Indeed, both enzymes mediated the same electron transfer step involved in disulfide bond formation in the E. coli flagellar protein FlgI. Notably, these same transgenic E. coli grown in the presence of warfarin lost both MtbVKOR's disulfide activity and their motility.

To further compare VKOR and MtbVKOR, warfarin resistant mutants of MtbVKOR were sequenced and found to have point-mutations similar to those that appear in humans resistant to the drug and who require higher dosage.

Although found in vastly different organisms, VKOR and MtbVKOR have the same basic function. The downstream effects of their activity are definitely divergent, but both can be inhibited by the same small molecule, warfarin. It is now clear that this enzyme can be studied for the development of better anticoagulants and better tuberculosis treatments.

The story of warfarin should be of interest to drug companies. In an age of blockbuster drugs and a pill for just about anything, one would think drug companies are doing rather well. Over 12 million Americans take cholesterol-lowering statins, and practically everybody you know has taken at least one prescribed pill in the past year. However, drug companies are begining to feel a pinch as many of them have put all their eggs in one basket, relying on one best-selling drug or another. Many of them are now seeking to expand the list of conditions that can be treated with each one of their drugs. By doing so, the companies can sell more of their drug while it is still patent protected. The evolutionary conservation of enzymatic function and structure will likely lead to more warfarin-like examples, cases where we can find new tricks for an old dog.

The bottom line is that all of this crosstalk is rooted in evolution. When change proceeds without design, as in evolution, it is not easy to create something complex from scratch. We often see that the useful products of evolution get re-used and modified throughout time.

Shigeki (left) and Spencer (right) are students in the University of California at San Diego/San Diego State University Integrative Microbiology graduate course during the 2010 winter quarter.