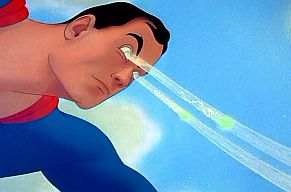 X-ray vision, once the exclusive domain of Superman and his super hero kin, is now a tool in the biological researchers kit. Granted, not every researcher has access to this superpower; the required synchrotron light sources are found only at large research facilities that happen to have a particle accelerator at hand. Still, it is surely worth the bother. Compared to electron microscopy, samples can be imaged in a more natural state without being either embedded or frozen, and they can be larger. Compared to light microscopy, the smaller wavelength of x-ray radiation has the potential to provide higher resolution. Resolution had been complicated by the difficulty in making efficient lenses, but new techniques in both lens design and manufacture are being developed. The lens problem can be circumvented using lens-less microscopy, as employed in a recent paper by Klause Giewekemeyer et al. 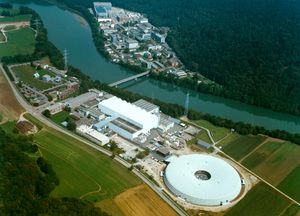 The data they reported was generated at the Swiss Light Source (SLS) in Villegen, Switzerland, an international center for x-ray microscopy. This facility utilizes a third generation synchrotron light source (whatever that is. I warn you, this is complicated. This and the next paragraphs are for those who care to know how it works). Here the light is generated by first accelerating electrons using a large series of magnets in a linear accelerator, next increasing the acceleration further with more ‘booster’ magnets, and then storing the accelerated electrons in a series of ‘undulators.’ These undulators were developed in the 1970’s at Berkeley and move the electrons around a circular array of periodically-spaced magnets, causing them to slalom as they circle. This step allows the researchers to select the wavelength of electron radiation to be used in the illumination beam (synchrotron light), ranging from ultraviolet to hard x-rays, depending on their imaging goals. 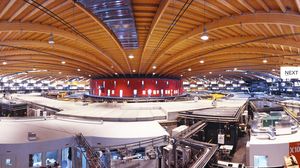 Inside the SLS facility. Source

Beam coherence is very important when imaging biological specimens, and the SLS setup specifically provides a bright, coherent, small-diameter x-ray beam. The lens-less setup used here does not create a high resolution image directly, as electron and light microscopes do, but rather generates a diffraction pattern from which an image can be computationally back-projected. Coherent X-Ray Diffraction Imaging (CXDI) involves moving a sample relative to a small illuminating beam and collecting diffraction patterns from multiple, overlapping spots of the sample, eventually collecting data from the entire specimen. A computer then sews together a unique image based on the alignment of all the collected patterns. For the work reported here, CXDI was combined with a second technique, ptychography (from the Greek πτνξ meaning fold), that uses computational power and iterative algorithms to solve the ‘phase problem’ generally associated with x-ray methods. The authors used this combined approach, termed Ptychographical Coherent Diffractive Imaging (PCDI), to image freeze-dried Deinococcus radiodurans cells — the first example of applying PCDI to a biological sample. They have demonstrated that it does, in fact, work. (For a review of PCDI, click here.) 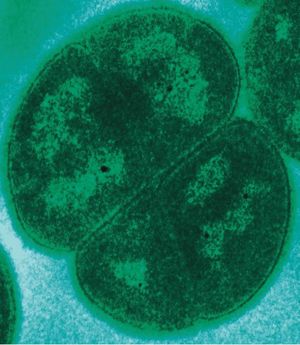 D. radiodurans is used in bioremediation due to its remarkable ability to withstand high amounts of radiation — 5000 Gy causes no loss in viability. However, its special abilities don’t end there; D. radiodurans is also resistant to acid, cold, vacuum, and dehydration! (For a review of the capabilities of D. radiodurans, click here.) It is not clear exactly how it accomplishes this polyextremophile feat, but we have some clues. First, while D. radiodurans appears to experience the same amount of DNA damage as E. coli when exposed to radiation, it has a higher DNA recombination/repair rate that, it has been suggested, may be facilitated by its unusual DNA structure (4 copies of the genome, perhaps organized into ring-like secondary structures). These speedy bacteria can repair their entire genome in about 3 hours after experiencing a radiation dose of 6,800 Gy! Second, its high intracellular manganese/iron ratio protects the proteins in the cell from damage by reactive oxygen species. This ratio is known to be important in bacteria for resistance to ionizing radiation and desiccation, both of which cause DNA breaks. Its action is thought to mimic the function of catalase and superoxide dismutase (of which D. radiodurans has three each), thus allowing the cellular proteins to function efficiently immediately after DNA damage has occurred. This paper applies the new technique of PCDI to image the nucleoids of D. radiodurans, thus expanding earlier structural studies. Four DNA quadrants are discernable inside many cells, while some cells show only two. 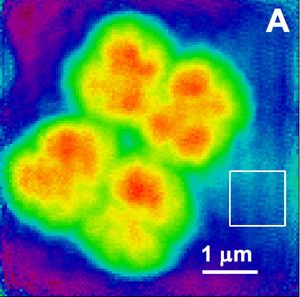 Reconstructed phase map of a PCDI scan on a tetramer of D. radiodurans cells. Source

While the images presented here are accurate and interesting, some questions regarding the usefulness of this technique persist. Notably, the resolution of the images shown in the paper doesn’t appear to be able to shed light on the organization within the nucleoid itself, merely on the position of nucleoids relative to each other inside the cell, and possibly on the level of DNA condensation. The authors suggest that combining tomographic methods with PCDI will solve this problem, but as with all types of tomography, so many images need to be collected that the radiation caused by the collision of beam electrons with the sample becomes limiting. It is unclear to me that resolution will be high enough when doses are made low enough for PCDI tomography. Also, to the best of my knowledge non-disruptive labeling methods (those not requiring fixation) do not yet exist for x-ray microscopy, further complicating interpretation of the density patterns present in the images.

Nevertheless, this work represents a step forward in x-ray microscopy and highlights the potential of this lens-less technique to generate a density map revealing the internal structure of unstained biological samples, such as an entire D. radiodurans cell. It could be particularly useful for examining the role of DNA condensation in radio-resistance (for instance by comparing DNA density maps of wild-type cells to those of non-resistant mutants) or for exploring the DNA organization of other bacteria — a long-standing question ill-addressed by light microscopy (inadequate resolution) and cryoelectron microscopy (inadequate contrast).

Jennifer is a microbiology graduate student in the Joint Doctoral Program of San Diego State University and University of California at San Diego. She works in Kit Pogliano’s lab.

I think you have done great job by writing interesting things about science and microbiology. This would definitely inspire others to do this kind of research.