« Fine Reading: March of the Microbes by John Ingraham | Main | And The Winner Is… »

When Crenarchaeota Divide, They Multiply

by Jenn Tsau and Suzy Szumowski* 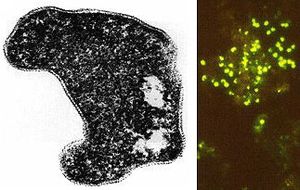 Sulfolobus acidocaldarius, an extreme thermophile occurs in geothermally-heated acid springs, mud pots and surface soils; it can withstand temperatures from 60 to 95 ºC, and a pH of 1 to 5. Left: Electron micrograph of a thin section (X85,000); Right: Fluorescent photo- micrograph of cells attached to a sulfur crystal. Source

When cells divide, it’s really important that they do so equitably so you don’t end up with some having too much and some too little cell material; the results of either could be deleterious. Therefore, over the billennia that life has been around, mechanisms to carefully divvy up intracellular goodies like DNA and cytoplasm have evolved. You can imagine that interest peaked in those who pay attention to such things when it was found that a group of microbes belonging to the Crenarchaeota lack any of the known cell division machinery. Crenarchaeota are a kind of Archaea that includes species known to survive in extremely hot or cold environments. And when we say extreme, we mean deep arctic-cold and volcano-hot—literally. Other known forms of life have some variant of actin (known as MreB in bacteria) or tubulin (aka FtsZ), which are involved in cell division or maintenance of cell shape. Until late 2008, when a pair of papers was published, no such proteins were found in the crenarchaea and their division remained quite mysterious. 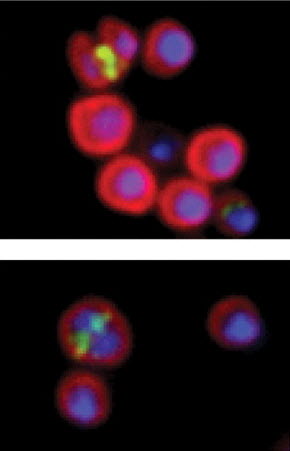 Regardless, these hardy little archaea are getting the job done, one way or the other. It has been known for some time that the Crenarchaeota possess homologs of a system called ESCRT (endosomal sorting complex required for transport). This is an attractive candidate for managing division in these organisms. Why? Because the ESCRT system helps detach daughter from mother cell during cell division in metazoans — such as insects, octopuses, and elephants. So it seemed plausible that these proteins might be helping here as well.

With this starting point, the authors of a recent paper began investigating a possible role for ESCRT proteins in the cell division of a fairly well-studied crenarchaeon, Sulfolobus acidocaldarius. Using PCR and Western blotting, they monitored the levels of ESCRT-like proteins found in synchronously dividing S. acidocaldarius and found that the levels of two such proteins (ESCRT-III and Vps4) were enhanced in dividing cells. Using immunofluorescent staining, both of these two ESCRT components were found at the midline of dividing cells. The regulation of both appeared to follow the same pattern, thus it seemed possible that they interact physically. To figure out if this was the case, the authors used a yeast two-hybrid system to isolate the specific domains of each protein that were binding the proteins to each other. With this information, they postulated what this interaction might look like at the structural level. As you can see, ESCRT-III lies flat snugly against Vps4, which is its binding partner. 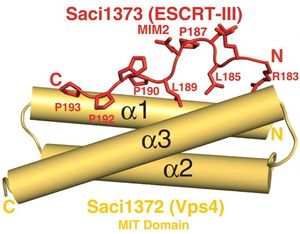 A schematic representation of the interaction of ESCRT-III (Saci1373, in red) with the Vps4 (Saci1372 MIT domain in yellow). Source

To seal the deal, they needed to show that removing or altering these components would affect cell division did just that through additional immunofluorescent staining experiments. When they grew cell lines expressing a nonfunctional form of Vps4 with a defective ATPase domain, they found some normally-sized cells but many gargantuan cells, the latter being unable to divide and containing abnormally high amounts of DNA. This implies that ESCRT and Vps4 are key players in Sulfolobus cell division.

This novel function ascribed to ESCRT proteins paints a more complete picture of cell division throughout all the domains of life. We can all rest a little bit easier knowing that there is a logical explanation for the continued existence of Crenarchaeota on this earth, even though they do not possess the better known prokaryotic cell-division proteins. 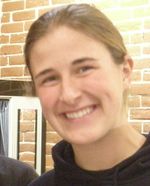 Jenn (left) and Suzy (right) are students in the University of California at San Diego/San Diego State University Integrative Microbiology graduate course during the 2010 winter quarter.