A Most Lively Virus 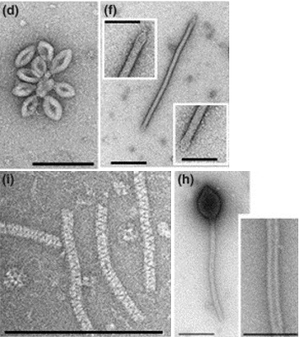 TEMs of a variety of viruses and virus-like particles observed in a single enrichment culture established from a sample col­lected at a Yellowstone hot acidic spring (85°C, pH 1.5–2.0). Bar = 200 nm (100 nm for insets). Source

Morphologically speaking, the viruses of mesophilic and moderately thermophilic bacteria and archaea are a dull bunch. Of 5,100 surveyed, 97% are ho-hum head-and-tail phages – icosahedral heads with helical tails. The remain­der were tailless icosahedra or filaments, except for two spindle-shaped oddballs. If you'd like more structural ex­citement, best to go virus hunting in geothermally-heated aquatic environments above 80 ºC – the hot springs, mud holes, and deep-sea hydrothermal vents – and be pre­pared to be astonished.

Here the statistics are reversed. Only 6% resemble typical head-and-tail phages; another 6% are tailless icosahe­drons; about two-thirds are filamentous, rod-shaped, or spindle-shaped; the rest are truly unique. The oddest ones are viruses of hyperthermophilic Crenarchaeota of the genera Sulfolobus, Acidianus, Pyrobaculum and Thermoproteus. About two dozen of these have been isolated and characterized, calling for the creation of seven new viral families to house them. All have dsDNA genomes, some linear and some circular. Almost all eschew host lysis, opting instead for a stable lysogenic relationship. Maybe life outside is just a little too tough. 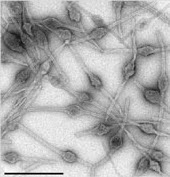 Here's one particularly fascinating example isolated in 2005 from an acidic hot spring (85–93ºC; pH 1.5) at Poz­zuoli, Italy. Enrichment cultures contained unusual foot­ball-shaped virus-like particles with tails of varying lengths at each end. (The researchers describe them as "lemon-shaped," but lemons, at least in Hawaii, feel no obligation to resemble the Sunkist stereotype in either shape or color. "Football-shaped" isn't perfect either; footballs in some parts of the world are round.) These strange particles behave like respectable viruses, repli­cating in cells of the archaeon Acidianus convivator. This virus, the Acidianus two-tailed virus (ATV), has a family all to itself: the Bicaudaviridae (two-tailed viruses). Average length end-to-end for particles with fully developed tails is 744 nm.

Temperature matters to these viruses. When they infect at 85ºC, the optimum temperature for their host, they lysogenize. When the lysogens are experi­mentally subjected to a 75ºC "cold shock," the virus goes lytic, lysing the cells and releasing abundant virions four days later. 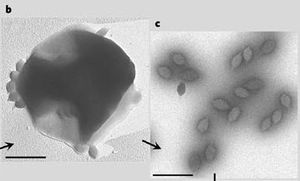 If you are wondering how a bunch of three-quarters-of-a-micron-long virions are accommodated within the host cell prior to lysis, the answer is that they are not. The vi­rions emerge as footballs; the tails form afterwards. This striking transformation does not require cell contact, an exogenous energy source, or co-factors, and as such is unique within the known viral world. A few other viruses undergo limited structural changes upon adsorption to a host cell or during budding from one, but this marked activity of ATV virions is host-independent, and a lively exception to our definition of virions as inert packages.

Why two tails? Why such long tails? The researchers note that ATV is the only virus of an acido­philic hyperthermophile known to lyse its host, albeit only under stress conditions. Thus, unlike those that stay indoors, ATV is confronted with a hostile environment where host cells are sparse. The tails triple their length, greatly increasing their chances of quickly bumping into a potential host cell. 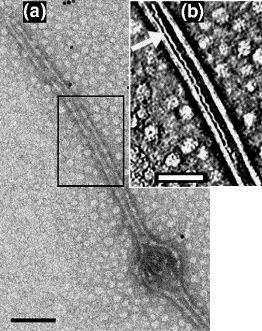 ATV virion. (a) TEM. (b) Three-dimensional reconstruction by electron tomography of the tail region shown in the inset. Arrow = internal 2 nm filament. Bar = 100 nm in (a), 50 nm in (b). Source

How the tails are formed remains a mystery. The process is temperature dependent. Tailless newborn particles can be held at 4ºC for several months, and still sprout no tails. At 75ºC, they grow tails, but very slowly, taking ~8 days. Given their preferred 85ºC they complete the job in less than an hour. In the process, the particles shrink to about half their original volume (even allowing for the volume of the tails.)

One clue comes from ATV's genome. Several of its genes encode virion proteins that contain heptad repeats, a mo­­tif that forms coiled-coil structures. Such structures are characteristic of intermediate filaments, architectural elements of both eukaryotic and bacterial cells (e.g., cre­scentin.) Sure enough, one of these virion proteins forms filaments in vitro that are similar to those observed within the virion tails. Even more intriguing, another one of the proteins contains, in addition to the heptad re­peats, an AAA ATPase domain such as is found in motor proteins (e.g., dynein.) What is an inert virus doing with an ATPase motor protein? Do they pack a lunch of ATP inside their virions before setting out for the great outdoors?