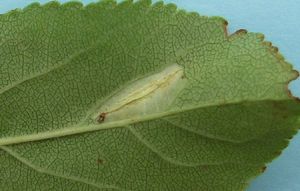 Phyllonorycter blancardella leaf mine on an apple leaf. This species makes a "blotch" mine, as opposed to the squiggly white trails of others that you might have seen in your garden. Visible are the layer of silk spun by the larva on the mine floor and its pupal case in the corner. Source

Each autumn, as the leaves on the apple trees in the Loire Valley turn from green to gold, observant orchardists notice islands of healthy green within the otherwise yellow leaves. These islands coincide with the site of leaf mines created by the larvae of a small moth, the apple leafminer Phyllonorycter blancardella. A group of French researchers have been taking a closer look at this for some years, and they have recently struck gold.

First a little background. Each apple leafminer begins life as a fertilized egg deposited within an apple tree leaf. There, confined between the two leaf epidermal layers in a plot bounded by adjacent leaf veins, the larval caterpillar feeds, develops through several instars, pupates, and, if all goes well, emerges as an adult moth. As it feeds on the plant tissue and deposits frass, it forms the "mine" visible from the outside. This endophagous strategy affords some protection from parasitoids that aim to deposit their own eggs inside the developing caterpillar inside the leaf. It also gives the larvae ready access to the more nutritious and less defended inner leaf tissues. But judging from the large size of the holes made by even just one very small caterpillar in my garden, I doubted that the limited area encompassed by a mine could provide enough food for the development of even this tiny moth.

To stretch their food budget, the larvae manipulate the plant to translocate more nutrients to their mine. (This might remind you of similar strategies used by gall makers such as the galling aphids.) Their quiet work becomes both obvious and more essential in autumn when each mine stands out as a photosynthetically-active island of green in the dying leaf. There the larvae can continue to feed and develop, sometimes completing one more generation before winter as a result. Both the translocation of nutrients to the mine and the delayed leaf senescence in the fall are associated with elevated cytokinin levels in the region of the mine. (Cytokinins are plant hormones involved in many activities, including the inhibition of senescence, the maintenance of chlorophyll, and control of "source-sink" activities.) Whence come the cytokinins? 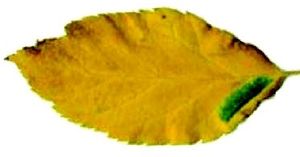 An autumn leaf with a green island formed by the apple leafminer. Source

The French researchers think they know. They had observed that not only do apple leafminer larvae contain several cytokinins, but the proportion of the various compounds exactly matches the profile found in the leaf mines. That other leaf-mining and gall-making insects have also been found to contain cytokinins further implicates the insects in cytokinin synthesis. But these researchers think there is more to the story.

They collected 60 apple tree leafminers from three locations over a 17 km area in the Loire Valley. All 60 carried a particular strain of Wolbachia but no other detectable bacterial endosymbionts. Suspecting that the Wolbachia might be making the cytokinins, they "cured" adults of their Wolbachia infection by antibiotic treatment and tested to see whether their descendents could produce green-islands. Neither first or second generation offspring could, and when tested under autumn conditions most such larvae failed to develop to adulthood. These results linked the green-island phenotype to the presence of the Wolbachia.

The most common group of cytokinins are adenine derivatives, such as zeatin, which was isolated from corn (Zea mays). Source

Other bacteria are known to make cytokinins. For example, the gall-forming Agrobacterium carries genes for cytokinin synthesis on its tumor-inducing plasmid. All Wolbachia genomes sequenced so far carry a key gene in the pathway (tRNA-IPT). Clearly further work is called for to irrefutably demonstrate cytokinin synthesis by these Wolbachia, but the data so far support this idea. The researchers conservatively conclude: This is the first time, to our knowledge, that insect bacterial endosymbionts have been associated with plant physiology manipulation.

One insect-endosymbiont story after another comes to light. Makes one wonder if perhaps behind every successful insect species is a good bacterium.

This is the first time, to our knowledge, that insect bacterial endosymbionts have been associated with plant physiology manipulation.