« A Most Lively Virus | Main | Paleovirology » 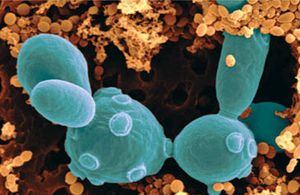 It is common knowledge that beer was produced by the ancient Egyptians and that van Leeuwenhoek (1632–1723) was the first to see yeast cells. However, what was defined as yeast in the seventeenth century is different from that of today. So did van Leeuwenhoek really observe yeast? In attempting to answer this question it might be helpful to describe some fundamental work on yeast by Charles Cagnard-Latour (1777–1859) published in 1838. (Recall that the cell theory dates from 1839). This tells us of the beer brewing and wine making state of the art around that time. It was known that the addition of yeast to properly treated grains of cereals would produce alcohol and carbon dioxide from the extracted malt sugars. In the times of van Leeuwenhoek yeast was considered an inanimate paste with no connection to living cells. What did Cagnard-Latour see? It is important to use the term “see” because, as he emphasized, he wished to approach yeast research in a new way, that is, by employing a microscope. (This approach was also followed by F. T. Kützig and Th. A. Schwann at the same time.)

Cagnard-Latour went to an English style brewery in Paris where every hour he took a sample for study from the container in which the beer was being produced. Initially he observed globules of different sizes, later he saw small vesicles protruding from the globules that had arisen through budding (Fr. par bourgeons), and finally, after four hours, only doublets were present. He concluded the initial small vesicles had increased in size through growth. If so, the doublets should not be adventious aggregates. To test this he forcibly shook his microscopic preparation with a kind of thorn (Fr. poinçon) and observed that the doublets remained intact. Remarkably, he noticed that upon dissolution of the doublets a scar remained at a variable place on the globule’s surface. He used the terms cicatrice (Fr. for scar) and marque ombilicale (Fr. for navel).

The number of globules increased in time, as did their total weight. His general conclusion was that beer brewing or fermentation involves the growth and proliferation of an organism. He also observed that commercial yeast contains singlets exclusively. So at this stage yeast was redefined, changing from an inanimate to an animate object. But was it an animal or a plant? Here he used the same approach as van Leeuwenhoek. The “little animals” of the latter were considered animals because they exhibited autonomous movement. Because yeast did not, Cagnard-Latour classified his growing globules as plants. Cagnard-Latour made another observation that I find highly relevant to the interpretation of van Leeuwenhoek's data. He saw his globules emit gas bubbles which caused individual globules to rise to the surface of the fermenting fluid in the fermentation vat.

Now, what about the observations of van Leeuwenhoek?

According to Cagnard-Latour in a footnote to his paper of 1838, van Leeuwenhoek considered yeast to be derived from flour. When presenting his work in Paris to the Academy of Sciences in 1837, he mentions that he had not been aware earlier of van Leeuwenhoek’s work. However, the first sentence in van Leeuwenhoek's letter of June 14, 1680, directed to Mr. Thomas Gale (1635/1636-1702), a fellow of the Royal Society, summarized his results in quite a straightforward manner: I have made several observations concerning yeast and seen throughout that the aforesaid consisted of globules floating through a clear substance, which I judged to be beer...Van Leeuwenhoek continues the above sentence by stating: ...in addition I saw clearly that every globule of yeast (“gist” in Dutch) in turn existed of six distinct globules and that just of the same size and fabric as the globules of our blood. Note that the diameter of a red blood cell is roughly 7 µm, which is comparable to the size of a yeast cell.

Drawing by van Leeuwenhoek of his wax model, taken from his letter of 14 June 1680 to Thomas Gale. This might be the first time in the history of biology that an experimentalist uses a model to explain his observations to the reader! Source

Continuing his letter, van Leeuwenhoek reports that when sampling beer being brewed he observes in the fluid "many small particles" (seer veel kleyne deeltjens) which cause the beer to appear turbid. Some particles were round, others irregularly shaped and some were bigger than others and they seemed aggregates of 2, 3 or 4 of the said particles and others again of 6 globules and the latter constituted a perfect globule of yeast. He interpreted this as aggregation (stremming in Dutch) and made many vain efforts to record the aggregation process. (Recall that Cagnard-Latour did the opposite: he attempted to demonstrate that yeast doublets arise from singlets.) To further appreciate the spatial organization of the yeast globule (the sextet), van Leeuwenhoek made a model composed of 6 wax globules which he arranged in such a way that all 6 globules could be seen when viewed from above. Clearly, this is an early, if not the earliest, example of model building for the interpretation of scientific data. 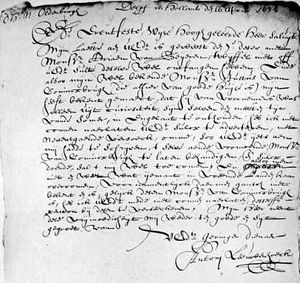 Van Leeuwenhoek speculated about the origin of the globules. (Note that he denoted single particles as well as sextets as globules.) Flour or meal of cereals is composed of globules which are first dehydrated by heat and when united with water which we are allowed to call beer, very small particles in the beer aggregate upon cooling to form a bigger particle, the singlet globule. The singlets aggregate to form a sextet, the yeast globule. (I did not translate this literally to keep it readable.) In other words, according to van Leeuwenhoek, yeast arises out of cereal flour or meals during brewing and as such yeast is not a distinct biological entity.

We are now approaching the answer to our main question. As Cagnard-Latour did later, Van Leeuwenhoek also observed air bubbles coming to the surface of the beer in the brewing container. He calls them "air" because, unlike Cagnard-Latour, he was unfamiliar with gaseous carbon dioxide. To his regret, he was unable to trace the origin of the "air." Then follows a very striking intermezzo which starts with: But what shall we say of the numerous air bubbles that were produced from lobster eye, when we lay them in vinegar? In summary, he noted that if enough air bubbles remain attached to pieces of lobster eye, the latter float to the surface of the vinegar. When the bubbles dissolve in the air, the pieces of lobster eye sink again. This process repeats as long as air bubbles are produced. Surprisingly, van Leeuwenhoek makes no explicit connection to yeast. The term lobster eye (kreeften-oog in Dutch) in the letter of van Leeuwenhoek is not clear-cut. It seems also to refer to a material substance (a stoffe in Dutch), which affects the salinity of an acidic solution.

This lobster story reminds one of the observations later made by Cagnard-Latour on yeast, as described above. But why did van Leeuwenhoek describe his earlier microscopic observations on fragments of lobster eye in his letter describing his observations of yeast globules? Presumably because, I believe, he was inspired by the behaviour of yeast in a brewing container. Thus, irrespective of the identity of lobster eye, a reasonable answer to our main question is that van Leeuwenhoek did indeed observe growing yeast cells, despite the fact that he could not place them within a biological framework.

Author's Note: Translations of van Leeuwenhoek's Dutch to English are mine, and thus I am responsible for any errors.

Primary sources for this contribution include the 1680 letter of van Leeuwenhoek that has been kindly brought to my attention by Warnar Moll. The reference to the 1838 paper of Cagnard-Latour I found in the elegant 1871 paper of Thomas Huxley on yeast. Also highly recommended is a scholarly review on 19th century "biochemistry" by Herbert C. Friedmann. Very informative is the review of James A. Barnett.

Antoni van Leeuwenhoek. Letter to Thomas Gale of June 14th 1680, pp. 6-10 in the second printing carried out by Hendrik van Croonevelt at Delft in 1694.