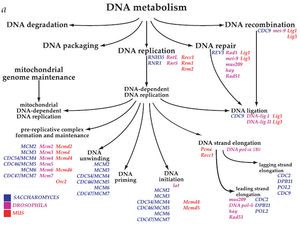 (Click to enlarge) From Gene Ontology, a portion of the biological process ontology describing DNA metabolism. Note that a node may have more than one parent. For example, DNA ligation has three: DNA-dependent DNA replication, DNA repair and DNA recombination. Source

Not to be confused with ontogeny (the study of a multicellular organism’s development, usually from an egg into maturity, as in “ontogeny recapitulates phylogeny”), ontology is a term used by philosophers that has now been appropriated by bioinformaticists. Here it denotes the categorization of knowledge within a certain domain. Proponents of a consortium called Gene Ontology wrote: The goal of the Consortium is to produce a structured, precisely defined, common, controlled vocabulary for describing the roles of genes and gene products in any organism. This group is starting modestly, working with the databases for three model eukaryotes: drosophila, mouse, and yeast. The high degree of conservation of both sequence and function observed, particularly for core cellular functions, often makes it possible to transfer knowledge acquired from one organism to others.

Several websites are concerned with ontological approaches. Not all are readily penetrable. The Open Biological and Biomedical Ontologies tells us: The OBO Foundry is a collaborative experiment involving developers of science-based ontologies who are establishing a set of principles for ontology development with the goal of creating a suite of orthogonal interoperable reference ontologies in the biomedical domain.

Gene ontology is being used widely and is destined to become part of every biologist’s vocabulary.

your description about gene Ontology is great.