I am the Lorax, and I'll yell and I'll shout for the fine things on earth that are on their way out!
Dr. Seuss 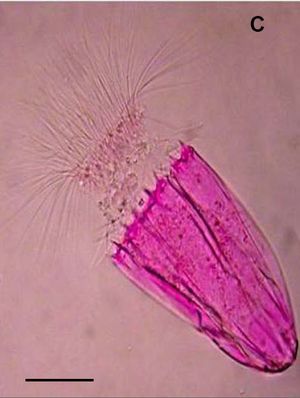 A loriciferan from L’Atalante Basin. Source

Life without air — a term coined by Louis Pasteur, the discoverer of anaerobiosis — has been thought to be exclusively a property of microbes, be they prokaryotic or eukaryotic. Multicellular organisms were thought to lack this talent. Until recently that is, when an Italian and Danish group led by Roberto Danovaro looked at an unusual-sounding habitat, a brine “lake” at the bottom of the Mediterranean, nearly 200 km from Crete. Called L’Atalante Basin, this area was formed when salt dissolved from the sea’s subsurface and accumulated in underwater depressions. Eight times more saline than seawater, this layer does not mix with the water column above it and, like the underlying sediment, is completely anoxic. This particular site is not unique; so-called oxygen minimum zones are found in all the oceans at fairly shallow depths as such things go, usually from 200 m to 1,500 m. Characteristically, they have very low available oxygen and lots of sulfide.

Extremophilic archaea and bacteria are common in such inhospitable-sounding environments, and so are a few eukaryotic microbes, notably protozoa. The news is that one can also find small multicellular living animals at this site. These include members of the Loricifera, metazoans less than a millimeter in length that are common inhabitants of the more usual marine sediments. Their name, sounding like something from Dr. Seuss, actually stems from their exoskeleton that serves as armor (lorica in Latin). Loriciferans have been found in hypersaline marine sites before, but they were presumed to be remnants of dead organisms falling from above (the “rain of cadavers”). However, although they are abundant in the anoxic zone, in the last 40 years only two specimens had been found in the deep Mediterranean Sea above it. This new report shows that these little animals are actually alive, as demonstrated by their life-like morphology, their uptake of radioactive leucine, and their staining with “vital” dyes. Some had eggs in them. Other kinds of metazoans in the same samples were clearly dead.

So, how do these anaerobic loriciferans harvest their energy? 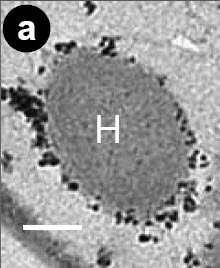 A hydrogenosome-like body in a section of a loriciferan. Source

Not much is known about this at present, but transmission electron microscopy of thin sections shows that they lack mitochondria and possess vesicular structures that resemble hydrogenosomes. Hydrogenosomes have been seen in various unrelated unicellular anaerobic eukaryotes, such as trichomonads, ciliates, chytrid fungi, and heterolobosean flagellates. They had never been previously observed in multicellular organisms, so this itself would be news. To remind you, hydrogenosomes produce energy by converting pyruvate into acetate and CO2, releasing hydrogen in the process. These structures are thought to be derived from mitochondria. However, with the exception of the cockroach-gut inhabiting ciliate Nyctotherus ovalis, hydrogenosomes are not known to contain DNA. All cells so far have been found to host either mitochondria or hydrogenosomes, never both. (May I ask a question? Does the energy metabolism of hydrogenosomes qualify as anaerobic respiration?) Right now, it’s too early to tell the nature and source of these organisms’ electron donors and acceptors. Do they oxidize the abundant H2S? Do they reduce sulfate or something else? Surely, answers to these questions will be soon forthcoming. 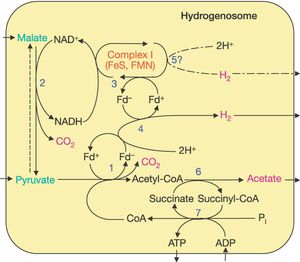 But before even worrying about energy metabolism, one should ask, what do these organisms eat? A likely menu being bacteria and archaea, there not being much else where they live (although falling cadavers might be also a source of food). Other loriciferans have a complicated set of protrusions that are often seen covered with bacteria. Also, their digestive tract is often filled with partly digested prokaryotic cells.

Are there other metazoans living in yet other anaerobic environments? The present finding strongly suggests that it’s worthwhile looking with fresh eyes in such habitats. Who knows what one will find. But clearly we have here another instance of an exception to the rule, something that Biology seems to be full of.

I think there may be a difference between occasional anaerobiosis and the permanent one of these creatures.