Everyone Rowing in the Same Direction Is there such a thing as an obligatorily multicellular prokaryote? We presented a case for their existence before, one that fueled our evolutionary imaginations. Unlike the myxobacteria, for example, which have both unicellular and multicellular stages, some magnetotactic bacteria appeared to be multicellular throughout their lives. Their multicellular coordination is apparent from their complex swimming behavior, their synchronous cell division, and their subsequent division into two equal multicellular spheres. Intriguing they are, but they could easily be relegated onto a shelf for microbial oddities—just one small group within the δ-proteobacteria, magnetotactic and restricted to saline environments. 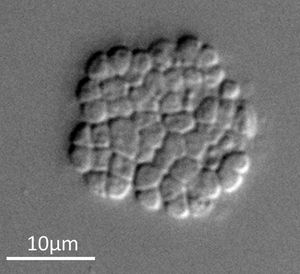 Now a recent paper announces the finding of a new subgroup within that multicellular clade. These new critters have a similar life cycle and morphology. They, too, are sulfate-reducers, but they are found in low-saline, nonmarine aquatic environments, and they are not magnetotactic—thus called non-Magnetotactic Multicellular Prokaryotes or nMMPs. Although they don't navigate by compass, they do exhibit active negative phototaxis—the first δ-proteobacteria known to do so. This ability was useful for the researchers; they set up a "light racetrack" in a capillary tube to concentrate these unculturable bacteria at one end of the tube. Is phototaxis useful for the nMMPs?

One of the notions put forward earlier for their magnetotactic relatives was that they used magnetotaxis to determine which way was down, thus efficiently navigating to their preferred sulfide-rich, anoxic environment found at greater depths. Maybe phototaxis serves the same function. The strongest response by the nMMPs is to the short blue-to-violet wavelengths that penetrate to the greatest depth in the water column. Genes for magnetosome proteins come and go from phylogenetic groups with some frequency, likely by horizontal gene transfer since they are located on a genetic island that appears to be mobile. So perhaps the nMMPs simply lost theirs. In which case, as the researchers note, it would be interesting now to know whether those multicellular relatives with magnetotaxis also work together to stay in the dark. Either way, these "lowly" prokaryotes seem to have mastered the art of navigating by committee.