Mysteries of the Bacterial L-Form: Can Some of Them Be Unveiled? 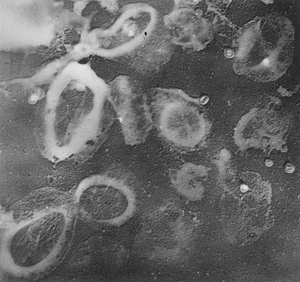 L-forms are bacterial variants with defective cell walls and irregular growth and multiplication. They arise after peptidoglycan, the exoskeleton of the bacterial cell wall, has been either degraded by bacteriolytic enzymes, or its biosynthesis has been disturbed by antibiotics and other inhibitors, or by defect mutations in essential genes for cell wall synthesis. L-forms with different degrees of wall defects can arise. International experts, headed by nobelist Sidney Brenner, recognized the need to distinguish between entirely cell wall-less protoplasts, surrounded only by a cytoplasmic membrane, and spheroplasts with residual, fragile cell walls. L-forms were discovered in 1935 by Emmy Klieneberger and subsequently described by many authors (examples here and here). Much interest in L-forms arose from their assumed but still unconfirmed roles as concealed pathogens and as survivors of antibiotic action. They are also useful tools for the study of basic mechanisms of cell biology, such as cell division. Yet, as justly deplored in a recent review, L-forms are still "unfamiliar to many microbiologists" and are often regarded "with scepticism." One hears complaints about the unusually labor-intensive and time-consuming process of L-form isolation and cultivation, and the uncertain outcome. However, in my experience, this can be overcome by patient determination. 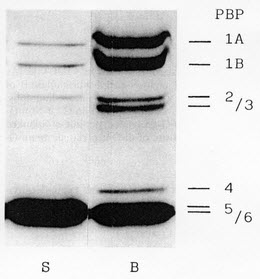 A special type of resistance to antibiotics, which we studied extensively in my lab, is reflected in the ability of the Gram-negative bacterium Proteus mirabilis to evade the inhibitory action of penicillin and other β-lactam antibiotics by growing as spheroplast- L-forms (references here and here). It is important to note that the most common resistance mechanism, inactivation of β-lactam antibiotics by β-lactamase, is not involved in this phenomenon.

β-Lactam antibiotics are known as specific inhibitors of the biosynthesis of peptidoglycan. They inactivate the peptidoglycan-transpeptidases (see chapter "β-Lactam-induced Proteus L-forms" by Ghuysen, J.M., Nguyen-Distèche, and Rousset, A.) multiple enzymes that form cross-linkages between peptide side chains of adjacent glycan strands in different stages of peptidoglycan biosynthesis. The enzymes are present in all bacteria as a group of membrane-bound proteins of different size but with the common property of covalently binding penicillin and other β-lactam antibiotics. Thus, all are termed penicillin-binding proteins (Fig. 2). In the peptidoglycan of Gram-negative bacteria, they connect the D-center of meso-diamino-pimelic acid in position 3 (meso-DAP3) of one side chain to D-alanine in position 4 (D-ALA4) of an adjacent side chain and are therefore called DD-peptidoglycan-transpeptidases (Fig. 3, upper). 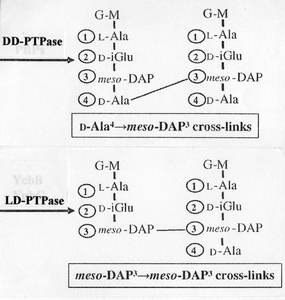 In many bacteria, inactivation of the transpeptidases results in the loss of strength and shape of the cell wall with subsequent lysis—a lethal event. Not so in Proteus mirabilis and some other Gram-negative bacteria. Here, fragile spheroplasts survive and can be propagated indefinitely in the presence of high concentrations of β-lactams. These spheroplasts carry disorganized components of the outer membrane, pili and flagella on their surface (Fig. 4), but their viability is evident. Under the phase contrast microscope one can watch them using their flagella to clumsily tumble around. Also, upon transfer to β-lactam-free medium they revert to normal, rod-shaped bacteria. 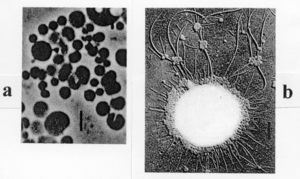 Our early suspicion was that, against expectations, some of the known peptidoglycan-trans-peptidases might continue to function during L-form growth. A comparison of penicillin-binding proteins in L-form spheroplasts and Proteus bacteria seemed to support this notion. Spheroplasts, harvested from their high penicillin growth medium, contained various amounts of free penicillin-binding proteins (Fig. 1). Some of these had been shown to form very short-lived complexes with penicillin and might thus be reactivated and resume their transpeptidase activity. However, we could not confirm the function of such a mechanism at that time, and the problem remained unsolved.

Almost 25 years later, with the discovery of a novel peptidoglycan cross-linking enzyme for a β-lactam-resistant transpeptidation pathway, a new type of resistance to β-lactam antibiotics became known. β-Lactam-insensitive peptidoglycan-transpeptidases were first found in β-lactam-resistant Enterococcus faecium and then in E. coli and P. mirabilis. In E. coli the enzymes form unusual peptide crosslinkages between the L-center of meso-diaminopimelic acid in position 3 (meso-DAP3) of one side chain and the D-center of meso-diaminopimelic acid in position 3 (meso-DAP3) of an adjacent side chain. They are therefore called LD-peptidoglycan-transpeptidases. The resulting meso-DAP3─meso-DAP3 crosslinkages (Fig. 3, lower) are present as minor components of E. coli peptidoglycan, in addition to the "normal" meso- DAP3─D-ALA4 crosslinkages (reference).

Two explanations for the β-lactam resistant growth of the P.mirabilis spheroplast-L-form seem now possible. During L-form growth in the presence of penicillin, the remaining activity of some of the DD-peptidoglycan-transpeptidases may suffice to synthesize a peptidoglycan with shape-defects, but with a sufficient amount of the usual (meso-DAP3)─(D-ALA4) crosslinkages, Or, alternatively, the L-form may construct an exclusively or preferentially meso-DAP3─meso-DAP3 crosslinked peptidoglycan with the help of the β-lactam-insensitive LD-peptidoglycan-transpeptidases.

Both mechanisms may ensure the conservation of essential structures for the repair of an intact peptidoglycan, after the eventual escape into a β-lactam-free environment allows the return to the normal shape of the bacterial cell. Hopefully, the described models may serve as clues towards obtaining the still missing structural data and help us to understand the strange enduring bacterial life with penicillin in the L-form.

Hans Martin is professor emeritus, Technical University Darmstadt, Germany, and an emeritus member of the ASM.