« Everyone Rowing in the Same Direction | Main | Talmudic Question #62 »

As is our tradition, we present here a lightly annotated list that includes most of our posts from the past half year. 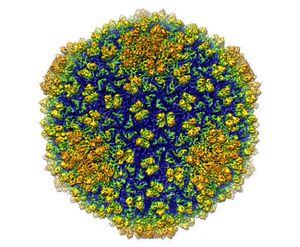 Phage Epsilon15 at a resolution of 4.5 Ǻ. Source

Viral Turtles. Viruses with dsRNA genomes enter host cells, capsid and all, and then keep their capsid intact as a safe workshop in which to transcribe their genes. A neat strategy for evading host defenses!

Paleovirology. Associate blogger Welkin Johnson takes along on a historical tour of the endogenous retroviruses of mammals, and from there it is but a short hop to the surprising recent discovery of Bornavirus sequences in the human genome.

A Most Lively Virus. How about that? A virus that sprouts two l-o-n-g tails all on its own, after exiting from its host. Just another one of those wonders from the world of hyperthermophilic archaea and their viruses.

A Holin One. Holins, phage-encoded enzymes that lyse the host cell by making holes in the membrane, don't just make small pores. They make huge fissures that allow other phage enzymes to rapidly attack the cell wall and let the phages out.

Time’s Up. Phage infections are precisely orchestrated, even to timing the moment of cell lysis. We visit holin-land, and there learn that these small proteins end the game at just the right time.

Prophage Masquerade. Does that bacterium have any prophages on board? Not an easy question to answer. Prophages come in various forms, some inducible and some not. Some may even have been co-opted by their host and put to work as gene transfer agents for their genes.

Five Questions About Lysogeny. We found some intriguing answers to our questions. Lysogeny can benefit both phage and host, and may even play a key role in microbial evolution.

Autumn Leaves. Leaves of your favorite tree are turning yellow, thus shutting down your pantry (if you’re a caterpillar ensconced inside a leaf). What to do? Use your endosymbiotic Wolbachia to produce cytokines that keep an island of the leaf green (and nutritious).

Leaf-Cutters Get Their Fix (nitrogen fix, that is). You know that leaf-cutting ants are terrific at eating the fungi they cultivate in their gardens. But where do they get their nitrogen from? Could it be from nitrogen-fixing bacteria? Looks that way.

And The Winner Is… The most abundant gene in the known universe? Transposase! 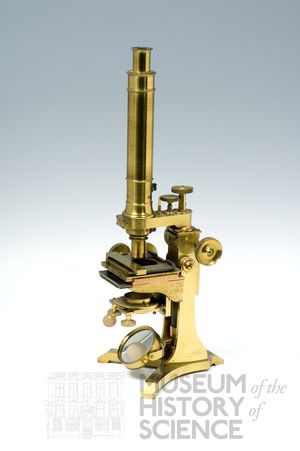 Source: Museum of the History of Science, Oxford/UK

Did van Leeuwenhoek Observe Yeast Cells in 1680? Nanne Nanninga examined letters and other historical material, then concluded that “our founder” actually saw yeast cells in his beer.

A Matter of Timing: Yellow Fever and the Mosquito Hypothesis. Associate blogger Welkin Johnson leads us through the maze of how yellow fever is transmitted and points to the role that this discovery played in the birth of modern virology.

A Close Encounter of the Enological Kind. John Ingraham regales us with a story of how he discovered the wine taste-correcting bacterium, Oenococcus oeni, of malolactic fermentation fame.

How Proteomics Got Started. The first to use proteomics to study bacterial physiology, Fred Neidhardt shares with us tales from those early days.

All Is Fair in Love and Warfarin. Graduate students Shigeki Miyake-Stoner and Spencer Diamond found it exciting that tubercle bacilli have a homologue of a protein called Vitamin K epoxide reductase, the target for warfarin. Sure enough, this drug affects the growth of M. tuberculosis.

Naegleria’s Split Morphology Disorder. Borrowed from the blog Skeptic Wonder by Psi Wavefunction is this tantalizing description of the cellular shenanigans of Naegleria that enjoys changing from an amoeba to a flagellate in a short two hours.

Mother’s Love. Budding yeasts have an advantage over cells that divide by mere binary fission: the bud and the mother cell are distinctive physical entities with different fates. Damaged proteins are removed from the buds and sequestered in the mother cells.

True or False: All Metazoans Need O2. False. Small metazoans called Loricifera thrive in an anaerobic brine lake at the bottom of the sea off Crete.

Everyone Rowing in the Same Direction. We revisit the multicellular prokaryotes, this time focusing on the recently-described group that navigates by negative phototaxis rather than magnetotaxis.

When Crenarchaeota Divide, They Multiply. Graduate students Jenn Tsau and Suzy Szumowski tell us of another archaea-eukarya connection: they both have ESCRT proteins. In eukaryotes, these act as an “endosomal sorting complex required for transport,” but in some archaea they may participate in cell division.

On the Continuity of Biological Membranes. Frank Harold, whose concepts of the cell have influenced the thinking of many, has graced our pages with another insightful and discerning essay on the origin of membranes. A must read, if you missed it before!

Of Archaeal Periplasm & Iconoclasm. Elio likes to think he is an iconoclast, and he is in good microbial company. Counted among the iconoclasts surely would be the thermophilic archaeon Ignicoccus hospitalis, which has energy producing-machinery on the outer of its two membranes.

Measuring the Strength and Speed of the Microbial Grappling Hook. Graduate student Amber Pollack-Berti (the blogger of Tiny Topics) describes how to measure the force exerted by a bacterium when it retracts its Type IV pili.

Through the Looking Glass: Silicate in Bacterial Spores. Silica and anthrax—sounds familiar? Weaponized spores? Peter Setlow explains that silicates are found naturally on such spores.

Mysteries of the Bacterial L–Form: Can Some of Them Be Unveiled? Hans Martin enlightens us about the mysterious survival abilities of these aberrant bacterial forms. They seem to make some peptidoglycan in the presence of penicillin, using drug-resistant enzymes.

Kryptonian Vision. Frequent contributor to this blog, grad student Jennifer Gutierrez explains (somewhat heroically) how an X-ray microscope works and what we might be able to see with X-ray vision.

You Are What You Eat. Eat seaweeds and you're apt to have gut bacteria that have acquired genes for the enzymes needed to digest their unique polysaccharides. So write graduate students Karen Schwarzberg and Mike Gurney.

Cryptic Life in the Antarctic Dry Valleys. We contemplate the microbial life in the most barren of lands in Antarctica. A surprisingly diverse group of stalwart organisms eke out a sheltered existence within the crevices of the rocks, and even beneath translucent stones.

State Microbes. In the wake of Elio's interviews on National Public Radio‘s All Things Considered about official state microbes, we’re having fun hearing from readers which microbes they deem most suited for their state (or city or country). Our favorite? Actually a “City Microbe,” Clostridium botulinum, for Los Angeles, for providing botox to embellish the locals.

The Attendee's Guide to Scientific Meetings, Part II. A second installment from Julian Davies counseling us on how to survive (and even thrive) at large meetings. Good advice presented in a humorous capsule.

Of Terms in Biology: Gene Ontology. The au courant bioinformatics-savvy phylogenomicist knows that this is how you categorize all that information.