« Mysteries of the Bacterial L-Form: Can Some of Them Be Unveiled? | Main | Viral Turtles » 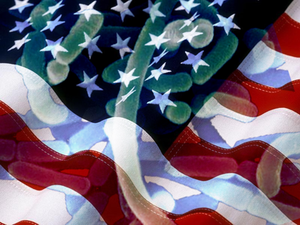 Not long ago, I was interviewed twice (click here and here) by Michelle Norris of National Public Radio’s All Things Considered regarding the burning issue of state microbes. The first interview was in response to the news that the state of Wisconsin’s State Assembly passed a bill proclaiming Lactococcus lactis as its state microbe. I opined that this would be a most appropriate choice, given the role of this bacterium in making cheese, a matter of obvious importance to Wisconsinites. Alas, the state Senate did not take up the bill, so L. lactis will have to wait (perhaps in a lyophilized state) for future proposals. Michelle proposed that the other states now have the chance to be the first to adopt a state microbe. Listeners sent in their nominations, some of which we discussed during the second interview.

Mentioning the quest for state microbes to microbiologists and non-microbiologists alike usually results in a chuckle. Fair enough: in today’s world, preoccupation with such ostensibly trivial matters may be frivolous. Still, there could be an educational point to this. Kids in each state, when presented with the state microbe, may want to figure out what makes the microbe special and even learn something about microbes in general. (Maybe adults, too!)

The interviews were good fun (the kinship in the names of our respective activities, STC and ATC, was a comfortable point of departure). Michelle was exceedingly friendly and helpful, likewise her off-the-air colleague Melissa Grey (author of All Cakes Considered). Both were eager to delve into matters microbial. Each time the interview lasted some 15 minutes, from which they selected the material that was aired. We chatted in a free and easy manner that I found both relaxed and pleasant.

Here is a list of nominations from NPR listeners and readers of New Scientist, as well as some of our own. Perhaps microbiologists in each state will find it worthwhile to come up with their choices. Those with political connections to state legislators should pay special heed. I omit suggestions of pathogenic agents (with a couple of exceptions), on the supposition that state legislatures would not take kindly to them.

for the penicillin it makes, to be used to cure gunshot wounds due to the recent illegal immigrant law. (NPR listener) (2) The city of Los Angeles got two nominations for a “city microbe:”

) (2) The Sunshine State can share its ample sunlight and coastal waters with a photosynthetic marine cyanobacterium, e. g.,

Can you think of others? Keep them coming!