« Welcome, mBio | Main | Everyone Rowing in the Same Direction »

You Are What You Eat

by Karen Schwarzberg and Mike Gurney 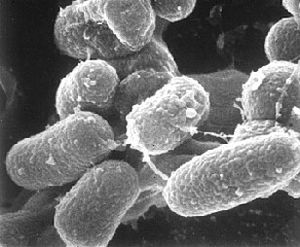 Despite the rise of a global culture, deliciously distinct differences in diet still persist among various nationalities. Makes one wonder if, along with each cuisine, comes a distinctive microbiome. We now have the research tools needed to begin to explore such possibilities. A paper recently published in Nature by Hehemann et al. reports that, in at least one particular instance, we do harbor bacteria adapted to the traditional diet of our culture.

All of us humans rely on our gut bacteria to supply enzymes that we lack but that we need in order to digest the polysaccharides found in terrestrial plants. But the enzymes (glycoside hydrolases) needed to breakdown polysaccharides unique to marine algae, such as carrageenan and agar, are another story. Such enzymes had been identified only in some marine bacteria. Hehemann and colleagues wondered about the Japanese, who consume, on average, 14 grams of seaweed per day (mostly the Porphyra spp. of red algae known as nori). 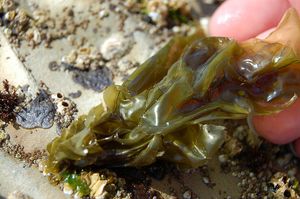 Nori contains the sulphated polysaccharide porphyran, so they began their investigation by searching for porphyranases within the genome sequence of a marine Bacteroidetes that lives on another red alga, Zobellia galactanivorans. Sure enough, they found two such enzymes (β-porphyranases). Structure analysis provided knowledge of the active site, making it possible to mine for more porphyranases in the GenBank non-redundant database. This netted them six more likely β-porphyranases. All of these enzymes were from marine bacteria with the exception of one found in Bacteroides plebeius, a human gut bacterium. Notably, all 6 strains of B. plebeius described so far have been isolated from the microbiota of Japanese individuals. This includes the type strain that was sequenced as part of the Human Microbiome Project. 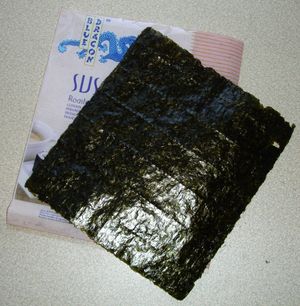 Nori sheets in the marketplace. Source

Next, in order to see if porphyranases are common in Japanese — and only Japanese — intestinal microbiota, these researchers screened samples from 13 Japanese and 18 North American volunteers. Strikingly, these enzymes were found in four of the 13 Japanese tested, but in none of the North Americans. Thus the Japanese can digest their nori (Porphyra) courtesy of the particular strains of B. plebeius that they carry, strains that are not found in North Americans. Furthermore, genomic evidence suggests that the initial acquisition of the β-porphyranase genes by B. plebeius was by horizontal transfer from a marine Bacteroidetes. The likely site for the transfer might well have been within the human GI tract since such Bacteroidetes are present on the uncooked seaweeds that have been avidly eaten by the Japanese since at least the eighth century. The transfer would have provided the host with a selective advantage: the ability to metabolize and derive energy from a frequently-eaten carbohydrate source that others in the population could not digest. Interestingly, the paper reports an incident of transfer from mother to infant, implying that we can pass those modified bacteria to close family members and perhaps others. 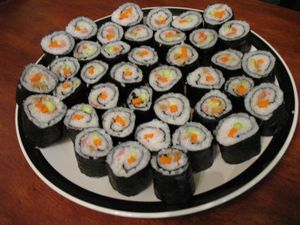 Nori on the plate. Source

Now, what are the implications of these findings? Could our microbiota influence the incidence of obesity or even coronary heart disease and stroke? Could the etiology be as simple as having a few genes in a few bacteria somewhere in the small intestine? Clearly, the dietary choices we make provide ongoing selection pressure, determining which bacterial strains — even which genes — are maintained or lost. This paper strongly suggests that, at least in the case of the porphyranases, rare occurrences of horizontal transfer can introduce “good” genes that can become established within the resident gut consortium of a population. But perhaps the genes that provide a selective metabolic advantage to members of our microbiome are, for us, “pathogenic.”

As humans, we are born sterile and subsequently acquire a microbiota from our food and/or our environment. Our race and nationality don’t matter, but what we eat does. Throughout our lives, there will always be organisms coming in. However, for an organism to successfully colonize and become established in our gut flora, it has to compete effectively with what is already there. Various bacterial strains can come and go with shifts in our diet, antibiotic therapy, and other factors. Thus the growing revenue stream for the probiotics industry that offers us "good" bacteria in convenient, easy-to-ingest forms. For these "good" bacteria to persist, though, we must eat a diet rich in foods that gives them a selective advantage; otherwise, the microbial community will eventually return to its original configuration. Consequently, maintenance of the beneficial impact of probiotics would require a change to a diet favoring those organisms, presumably a diet more healthy for us, too. However, we would guess that the benign genes and good bacteria are there already, which would render the need for probiotics moot.

Never has it been more true: You are what you eat.

Mike Gurney and Karen Schwarzberg are students in the Spring 2010 graduate course in Integrative Microbiology at the University of California at San Diego/San Diego State University Joint Doctoral Program.