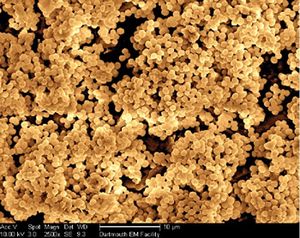 Typically, when one thinks about the commensal bacteria living with us, what comes to mind are the benefits they provide by aiding in food metabolism, producing vitamins, and preventing colonization by invading pathogenic bacteria. In undergraduate microbiology courses, students are taught that "friendly" bacteria outcompete pathogenic counterparts using a variety of strategies, ranging from blocking colonization sites to all-out chemical warfare. Today, as antibiotic resistance develops at an accelerating pace, investigating how commensal and pathogenic microbes interact might give us insight useful for developing the next generation of antibiotics. Compared to the rate of bacterial adaptation, we are slow to develop new antibiotics. Our commensal organisms are under constant selective pressure to prevent colonization of their niches by a pathogen; the pathogen is under pressure to stay one step ahead of the commensal. Consequently, there is a microbial arms race occurring at the speed of evolution. One would expect that the most successful commensals, under pressure to conserve resources, might evolve some highly effective compounds to outcompete or kill the invader. Further, such compounds would be expected to act on processes so basic to survival and/or pathogenesis that pathogenic bacteria would find it difficult to evolve resistance.

It is well established that Staphylococcus epidermidis is a commensal bacteria found on human skin, where it is thought to assist in the breakdown of keratinocytes, and on nasal passages. It can cause also disease when host defenses are compromised, leading to skin infections, bacteremia, endocarditis, and sepsis. In contrast, S. aureus can be found persistently colonizing the anterior nares of up to 30% of people. It is estimated that 1% of people carry beta-lactam antibiotic resistant S. aureus or methicillin-resistant S. aureus (MRSA). According to the Centers for Disease Control and Prevention, there are an estimated 12 million visits to doctors annually related to suspected staph or MRSA skin infections. In hospitals, there has been an increase in nosocomial staph infections due to MRSA. For example, in intensive care units in the US, the portion of S. aureus infections due to MRSA was 2% in 1974, 22% in 1995, and an alarming 64% in 2004. A study in 2007 reported that invasive MRSA infections occur in approximately 94,000 Americans each year, resulting in an estimated 19,000 deaths annually. It is estimated that 86% of the cases are associated with health-care.

An elegant paper recently published in Nature by Iwase et al. elucidates a new role for the versatile S. epidermidis, namely that of protector against S. aureus. The authors sought to understand the relationship between S. epidermidis and S. aureus, particularly how the former outcompetes the latter. They isolated nasal bacteria from 88 volunteers, 84 of whom carried S. epidermidis, 28 S. aureus. They considered that the lower incidence of S. aureus might be due in some way to the presence of S. epidermidis.

The authors then purified the inhibitory substance from the supernatants and identified it as an S. epidermidis serine protease (Esp). To demonstrate that Esp is indeed responsible for the destruction of S. aureus biofilms, they constructed an isogenic esp deletion mutant and found it lacked that activity; complementing the deletion with the esp gene restored it. They also showed that a serine protease inhibitor blocked the biofilm destruction. Microscopy revealed that Esp destroys the intercellular matrix in S. aureus biofilms and promotes conversion of the S. aureus to the planktonic form. Furthermore, when S. aureus was co-cultured with Esp for one year, it remained sensitive to Esp, indicating that evolution of resistance to Esp occurs slowly or not at all.

It is especially intriguing that Esp works in conjunction with β-defensin 2, a component of our innate immune system, to destroy S. aureus in biofilms. S. epidermidis and Homo sapiens may have co-evolved to reduce the levels of a common foe, S. aureus. The former is motivated to occupy valuable nasal real estate, the latter to protect its life. Previous studies have demonstrated interference of MRSA colonization by other bacteria as well, including methicillin-sensitive S. aureus (MSSA) and Corynebacterium spp.

Before we begin inoculating patients with S. epidermidis to curtail the activity of MRSA, we should remember that S. epidermidis is also an opportunistic pathogen. Like its cousin S. aureus, it also infects patients who are immunocompromised or who have received shunts, catheters, or implants. Furthermore, differences in the biology, ecology, and epidemiology of hospital-acquired MRSA versus community-acquired MRSA dictate different preventative measures to control these different infections.

However, if a stable form of Esp could be made, its therapeutic uses could be manifold. S. aureus is relatively easy to kill when it is not sequestered in biofilms. We could imagine an Esp industrial spray used in conjunction with UV radiation to sterilize surfaces and medical devices intended for implantation, a topical Esp spray to treat S. aureus skin lesions, and perhaps eradication of drug resistant strains in hospital personnel. That resistance did not develop upon long-term exposure to Esp suggests that this "antibiotic" could be useful for a long time. Additionally, such Esp-based products may be more potent if used in conjunction with human β-defensin 2; however, since that component is derived from the innate immune system, further research would have to be undertaken to prevent potential undesirable effects in patients. Because it is often the simple things that matter, it is important to note that nosocomial MRSA transmission can be dramatically reduced by washing hands between handling patients, a task that is too often neglected by healthcare staff.

We find it very interesting that a commensal bacterium and the host immune system are involved in a synergistic effort to combat S. aureus, with each partner providing one of the two molecules that interact to produce a targeted bactericidal effect on S. aureus. It makes us wonder if we have additional collaborative relationships with our resident microflora that prevent or control colonization by other pathogenic bacteria. Certainly, if one has been found, there must be others that we can understand and utilize for intelligent design of antimicrobial compounds. Who knew that a possible paradigm shift in antibiotic design was right under our nose all along.