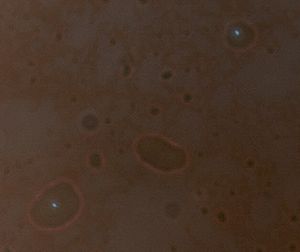 On April 20, 2010, an offshore oil drilling rig in the northern Gulf of Mexico, the Deepwater Horizon (DH), exploded from undetermined causes. The floating rig sunk two days later, breaking off the well pipe and spilling huge amounts of oil. At the low end of the estimates, the spill has already eclipsed the 11 million gallon from the Exxon Valdez in 1989. Before the oil stops flowing the amount released into the Gulf may well exceed the 140 million gallons released into the Gulf of Mexico by the 1979 Ixtoc-1 well blowout.

The first research vessel on site was the R/V Pelican. More recently, both BP and NOAA have sent research vessels to the site. The Pelican cruise, using fluorometer readings that measure colored dissolved organic matter (CDOM) which is a surrogate for oil and dispersed oil, revealed several plumes or lenses of CDOM in the deep ocean at 700-1,300 meters; water samples from these plumes are being analyzed for oil. Recent postings (May 18, 23 and 25) by BP from the R/V Brooks McCall that is carrying scientists from NOAA, EPA, and BP show a fairly consistent 5 ppb background fluorescence with spikes up to and slightly above 20 ppb at 1,200 meters. The background could be attributed to a number of things, including the fact that there are 63 natural seeps in the northern Gulf of Mexico that contribute approximately 20 million gallons of oil annually (click here and here for details). From all appearances, a plume of oil is moving deep below the surface, while oil is also moving on the surface and contaminating the shorelines of Louisiana.

Microbes are certainly being exposed to oil in the Gulf — both on the surface and at depth — and they are the first responders. Although many microbiologists naturally are interested in the identities of the oil degrading bacteria, this is of less relevance than the chemical changes the mixed microbial community of oil degraders brings about. Typically, as observed on the shorelines oiled by the Exxon Valdez spill, the microbial community goes from well under 1% hydrocarbon utilizers to about 10% in marine waters and sediments exposed to crude oil. The hydrocarbon degraders are diverse and include Vibrio and Pseudomonas species plus a number of other genera such as Alkinovorax which has previously been isolated from the Gulf of Mexico.

The scientists aboard the Pelican collected samples for microbial analyses using modern molecular methods to identify and characterize the microbial communities. They also measured dissolved oxygen (DO) across the plumes and determined that there was an inverse relationship between CDOM and DO; this indicates that there is active microbial degradation of the oil within the plumes. These results showed that DO readings within the plume maxima were reduced by 30% but were not so low as to preclude aerobic microbial degradation, which is generally orders of magnitude faster than anaerobic hydrocarbon biodegradation. Despite concerns that the DO would render the waters anoxic and unsuitable for fish, experience with the Exxon Valdez spill suggests that a 30% lowering of DO for flowing water is what should be expected as a result of active aerobic hydrocarbon biodegradation. With few exceptions, the Brooks McCall data do not show any DO depressions; on the contrary, these data show consistent DO increases with depth beginning at 500-600 meters. One exception reported by the Brooks McCall scientists shows a fluorometer spike to over 20 ppb and a concomitant DO reduction from 6 to 5 mg/L.

Oiled water samples collected by the Pelican show evidence of microbes near and on the oil droplets (Grimes et al., unpublished DAPI and FISH data). The subsurface plumes may be forming because of the use of dispersants at the actual deep sea site where the oil is being released. The finely dispersed material may also be a function of the hot oil (~200 ºC) hitting the cold seawater (~4 ºC). Whatever the explanation, the increased surface area afforded by these fine oil droplets should allow greater colonization by hydrocarbon utilizing bacteria. Indeed, studies on previous oil spills, including the Ixtoc-1 and the 1978 Amoco Cadiz spill along the Brittany coast, indicate that microbes are the first responders, degrading oil as it moves toward sensitive coastal areas. Ongoing studies should show how effective they will be in mitigating the current disastrous spill that is evolving along the Gulf coast.

What is clear from earlier spills, including studies on the Exxon Valdez spill and an experimental spill along the Delaware coast conducted by the EPA, is that adding microbes is highly unlikely to be of any help. While pure cultures of microbes do a wonderful job of degrading some hydrocarbons in laboratory culture vessels and bioreactors, they have never been shown to be able to compete with the diverse community of oil degraders that develops naturally in oceans contaminated with crude oil. Nor are they able to degrade all the hydrocarbons in the complex mixture that is crude oil. But that does not stop companies from trying to sell an immediate solution that will instantly clean up the spilled oil, or from ignoring or denigrating the scientific literature about the lack of demonstrated value of seeding cultures as opposed to just adding fertilizers to speed up rates of oil biodegradation.

During the Exxon Valdez incident I had the job of evaluating many products brought to the door of the field office in Valdez. These included seed cultures attached to clays that could make the oil disappear if dropped on the oil in Prince William Sound — clays can indeed make oil sink and disappear but there was no evidence that the bacteria attached to the clays would be able to outcompete the indigenous oil degraders that already had colonized the oil. And then there were the orange and lemon rinds that would bring about the instant disappearance of the oil—indeed if you use the olfactory test for the presence of oil and you add enough oranges and lemons you will no longer be able to smell the oil and could erroneously conclude that the oil was gone. Years later, responding to a spill in the Amazonian jungle in Ecuador, I was horrified to see workers throwing lemon rinds onto the oil — yes the same barrels of lemons that had not been used in Prince William Sound had made their way to Ecuador and been sold as the wonder bioremediation solution. Given the numerous news reports of people along the Gulf Coast determining that the oil must be near because they could smell it, my fear is that someone could get away with selling such an approach to a BP manager or local citizens group that is not familiar with oil degrading bacteria, bioremediation, and the complex chemical analyses that are used to determine the presence of oil. I have received several email notes this week from companies that have said that they are educating BP about all the scientific misinformation that is out there — claiming that they have cultures of microorganisms that they have seen instantly degrade oil and those mined from the deep sea that immediately will degrade the oil and are of no ecological danger because they are incapable of reproducing. Lets hope that BP insists on scientifically proven methods and resists the urge to buy instant snake oil cures.

The First Responders to Oil Spills is very interesting and it is very important article that every one should read and know about the Oil Spill. I request the author to post more articles and visit the http://investments-and-acquisitions.com
site, since this site contains great deal of info about the oil wells and the disasters.