Uncovering Beauty in Proteins to Fight the Pneumococcal Fratricides

From time to time, we dip into the microbiology blog by César Sánchez, Twisted Bacteria, and, with his permission, "borrow" a post such as this one. 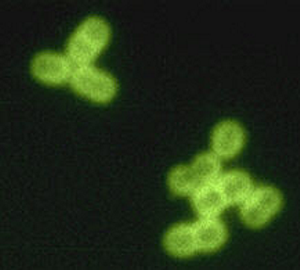 This post is about pneumonia and pneumococci, fratricide at the cellular level, and a pretty protein. And there's a video too!

First things first. Pneumonia is a common disease characterized by inflammation of the lungs that can be deadly: 4 million people in the world die from it every year. Half of them are children under 5 years of age. In fact, no other illness causes more deaths of children under age 5 worldwide. However, this is a preventable and treatable disease in most cases.

Many organisms can cause pneumonia, but the usual culprits are the bacteria Streptococcus pneumoniae (or pneumococcus) and, less frequently, Haemophilus influenzae type b (a.k.a. Hib). Safe and effective vaccines and antibiotics have been developed for these infections. Unfortunately, they are not commonly available in most developing countries, where pneumonia allies with poor nutrition, other illnesses (e.g. AIDS) and lack of resources to contribute to the cycle of poverty. To know more about the impact of pneumonia on world health and what can be done about it, I recommend listening to this podcast and visiting the World Pneumonia Day website. 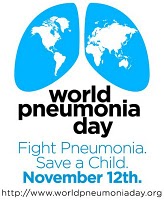 My only direct contact with pneumococcus research was... hum... many years ago. As an undergraduate student, I spent two months at the Centro de Investigaciones Biológicas (CIB, Center for Biological Research) in Madrid, Spain, where I learned how to cultivate pneumococci and some techniques for the study of lytic enzymes. These remarkable enzymes play a key role in bacterial physiology by cleaving, in a regulated fashion, specific linkages in peptidoglycan (that is, the highly cross-linked polymer that forms the bacterial cell wall). This apparently destructive activity is essential for cell wall turnover, and allows cell growth and division. Interestingly, the genomes of some bacteriophages (or bacterial viruses) also encode lytic enzymes, which the viruses use to break the cell wall and escape from its dying host after viral replication. These enzymes could be useful as antibacterial agents.

A few days ago I was happy to learn that a group of Spanish researchers — some of them from the CIB — had solved the 3D structure of one of the pneumococcal lytic enzymes, called LytC. What I find remarkable is how the 3D structure elegantly explains the peculiar role that this protein plays during a process known as pneumococcal fratricide.

Some bacteria produce substances that kill surrounding microbes, and use the resulting dead bodies as a source of nutrients. Sometimes, killer and victim belong to the same species, or even they are siblings. In these cases, researchers speak of cannibalism or fratricide; although if you view microbial populations as coordinated, multicellular entities, then you may prefer to use the term programmed cell death. 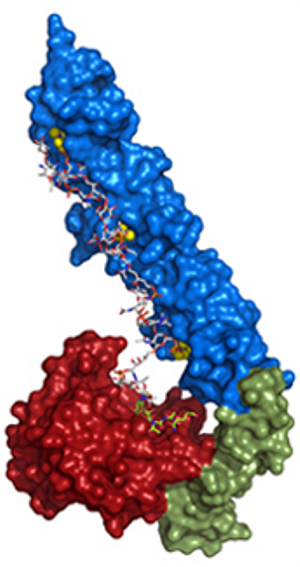 The structure of the pneumococcal autolysin, LytC. Source

Among pneumococci, some cells in a population become competent in response to certain signals; which means that they are able to take up DNA from their surroundings, and incorporate this genetic information into their own chromosome. This way, competent cells can acquire new inheritable abilities — such as production of a new capsule type, or resistance to an antibiotic — that can be very important for their survival. (This was the underlying mechanism in the famous Avery-MacLeod-McCarty experiment that helped identify DNA as the hereditary material in cells.)

But competent pneumococci do something else: they encourage non-competent siblings and other closely-related bacteria to commit suicide. They do this by releasing a particular lytic enzyme, called CbpD, that diffuses through the milieu and — somehow — activates LytC and other lytic enzymes that are already present in the non-competent siblings. Cell wall weakening finally results in a big bang: that is, the explosion of the non-competent pneumococci. The materials released serve not only as nutrients and sources of genetic information (DNA), but also as virulence factors that help competent cells to survive in their human host.

The 3D structure of LytC now provides the clues to explain the enzyme's peculiar behaviour during pneumococcal fratricide. Have a look at the model of LytC on the right: ain't it a beauty? A substrate-binding module (in blue and green in the image) recognizes and binds the cell wall peptidoglycan, whereas a catalytic module (in red) is responsible for breaking a specific linkage in the substrate. Because of the unusual hook shape of the protein, the substrate-binding module and the catalytic module partially block each other. As a result, LytC cannot bind the highly cross-linked peptidoglycan that is predominant under normal circumstances. Only when CbpD or other lytic enzymes cut specific linkages in the cell wall, LytC is able to bind the 'loosened' peptidoglycan and comes into action—with deleterious consequences for the non-competent pneumococci.

To make the story even more attractive (at least to me), the researchers bothered to produce a video that illustrates — in a fascinating way — the pneumococcal fratricide and the mechanism for LytC activation. Please watch it, the background music is nice too. The video includes some captions in Spanish, but I uploaded the video to YouTube and added English subtitles for a wider audience. I hope more researchers will get into the trouble of making visually attractive videos or presentations of their work (and make them freely available), it really makes a difference...

César is a science communicator living in London and host of the blog Twisted Bacteria.