« Microbiology in the Andes: Ancient and Unexpected | Main | A Giant Among Giants » 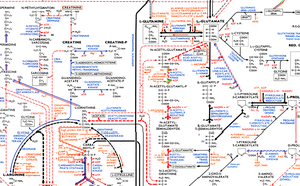 Years ago, pathways of intermediary metabolism made up a significant portion of biochemistry and microbiology courses. Therein, students learned about interconversions and connections between pathways, and they could follow the carbons as they moved from acetate into the cholesterol molecule and many others. But the advent of exciting new methodologies — structural biology, recombinant DNA, molecular genetics, immunochemistry, probes, blots, microarrays, metagenomics, and more — crowded much of metabolism right off the syllabus. Given that teaching pathways could be dry and boring, faculty often elected to substitute more trendy and exciting topics instead. To be sure, they thought metabolism was important, but assumed 'someone else must be teaching it.'

The result is a generation of well-trained scientists who can clone or crystallize just about anything and can harvest bushels of data from vast microarrays. But once those gene names are converted into enzymes, they are not so adept at mapping their enzymatic steps into a coherent and integrated system of pathways. In fact, a survey I instigated at an IMAGE (Integrating Metabolism and Genomics) meeting in 2004 showed that the vast majority of individuals trained after the 1970s knew little about the pathways of photosynthesis or of amino acid, purine, and pyrimidine biosynthesis, nor did they think that needed to be taught at the undergraduate level.

So we now have faculty (in the assistant and associate ranks) who admit to me that they would have a tough time teaching pathways effectively because they don’t know much beyond glycolysis and the Krebs cycle. Yet, in the past 5 years, I have found time and again that some of the most revealing presentations at the ASM meetings (and others) have shown that important signals in microbial processes are, in fact, small metabolites, and that the key enzymes are not specific to pathogenesis, development (e.g., sporulation) or differentiation (morphotypes), but rather they are the enzymes of the Krebs cycle or for key steps in nitrogen or phosphate metabolism. Imagine that!

In this era of metagenomics, metabolism has resurfaced dressed fashionably as metabolomics: the study of the universe of small molecule metabolites that characterize a biological sample, usually one containing many different species, e.g., the metabolome of the human gut or the cow’s rumen. Somehow the profiles of small molecules reveal important aspects of the health of such ecosystems. So now we find faculty and students scrambling to teach and learn about primary and secondary metabolic pathways so that they can find their way through the vast databases that are being assembled from structures, pathways, regulatory networks, etc.

Metabolism is enjoying a renaissance in our curricula and it is about time! There are vast secrets about biology to be revealed by the small molecules. Understanding how their levels rise and fall will take a careful study of the enzymatic pathways leading to and from them. So hello again, Metabolism! It’s so nice to have you back where you belong.

Amy is Professor of Biology, Swarthmore College, and President of the Waksman Foundation for Microbiology.