« The Uncultured Bacteria | Main | Microbiology in the Andes: Ancient and Unexpected » 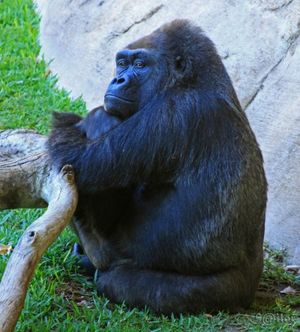 Tenfold Power. A gorilla can lift 10 times its own weight, it is said. It can also sit wherever it wants. Source

How often have you heard it said, or seen it stated in writing, that we carry ten times more microbial cells than cells of our own? We don't dispute this figure, at least not as a ballpark estimate. But we were curious to find out where it came from. The paper that seems to be quoted most often in this regard is Microbial Ecology of the Gastrointestinal Tract by Dwayne Savage in the Annual Review of Microbiology, 1977, 31:107-33. Savage was an eminent intestinal microbiologist and those of us who knew him believe that he was a stickler for details. So he should have known. He stated: The various body surfaces and the gastrointestinal canals of humans may be colonized by as many as 1014 indigenous prokaryotic and eukaryotic microbial cells (70).

Just how authoritative is that? References to experimental work? None are given. Surely, the number of bacteria in feces must have been determined countless times through the years. A search of older literature is called for (but who’s got the time!). Moreover, is the number of human cells based on more solid ground? We have no idea.

Nowadays, a quantitative PCR using universal bacterial primers should give a reasonable estimate of the total intestinal bacterial DNA, a figure that can be converted with some assurance to the number of bacteria present. For good measure, add a few percent to account for eukaryotic microbes. Note, however, that we take leave from a good portion of our intestinal microbiome every day, the lucky among us with satisfying regularity. So, the ratio fluctuates daily. No big deal, but let’s qualify the ten-to-one mantra by saying “estimated.” To say the least.

Stanley Maloy is Dean of Sciences and Associate Director of the Center for Microbial Sciences at San Diego State University.

An homage to the Powers of Ten by IBM