A handsome E. chlorotica. Its rich green pigmentation is courtesy of plastids captured from its food source, the siphonaceous marine alga Vaucheria litorea (seen in the background). Source

Having an intimate relationship with photosynthetic microbes is a widespread strategy adopted by numerous unicellular and multicellular organisms. Some eschew a committed relationship, and simply nab the plastids, sequestering them inside vacuoles where they continue to photosynthesize for a while. Previously we reported on a ciliate that captures the algal nuclei, as well, to support the plastids, and a flagellate that seems to be in the process of converting their plastid into a well-mannered organelle. What about us metazoans? So far there is only one group known to practice this kleptoplasty — the sap-sucking sacoglossan sea slugs — and, so far, only one genus among them is known to have made this a long-term relationship.

The best-studied species here is Elysia chlorotica. These naked molluscs pass their quiet lives in salt marshes from Chesapeake Bay to Nova Scotia. Eggs laid each spring hatch into planktonic veliger larvae that home-in on the one particular species of algae that they use for food, Vaucheria litorea. The larvae attach to the algae where, within 24 hours, they metamorphose into hungry juvenile slugs that begin feeding. During winter months the slugs are inactive; with the arrival of spring and warmer water, the hermaphroditic adults lay their eggs and die soon thereafter.

The large cells of Vaucheria are coenocytic, each containing many nuclei and plastids. The slug slits open the cells with its radula (a rasp-like tongue), then slurps out the algal contents, plastids and all. (There are YouTube movies with stunning closeup views of a young slug's first meal here and here) The plastids are selectively taken up by specialized cells lining a portion of the gut and sequestered in vacuoles (by a mechanism as yet unknown). Here, the plastids keep on working. When given 14CO2, the 14C is later found in various slug metabolites. Young slugs that have acquired their first plastids can complete their entire life cycle (~10 months) in aquaria without algae so long as they have light. 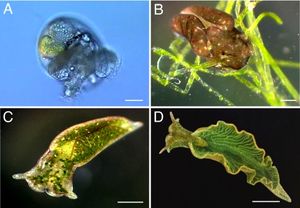 (Click to enlarge) Portraits of E. chlorotica. A Free-swimming veliger larvae. The green coloring in the digestive gut is due to planktonic feeding, not plastid acquisition, at this stage. B The first meal of a metamorphosed juvenile. Plastid acquisition by feeding is required for continued development. C Young adult 5 days after first feeding. D Adult. (Bar = 100 µm in A, 500 µm in B-D). Source

In these algae, more than 90% of the plastid proteins are encoded by nuclear genes. How do these algal plastids survive without support from the algal genome? This is an urgent matter as some of the proteins that make up the light-harvesting apparatus suffer ongoing damage and need to be replaced frequently. Researchers incubated algae and plastid-containing slugs with [35S] methionine, then isolated their plastids. The plastids showed similar arrays of labeled proteins. Moreover, some of those plastid proteins synthesized in the slugs are synthesized on cytoplasmic ribosomes, not in the chloroplasts.

Subsequently, these researchers showed that the slug’s nuclear genome contains genes for at least three plastid proteins that are encoded in the algae’s nuclei. The slug also expresses several genes for the chlorophyll synthesis pathway and synthesizes chlorophyll a. These genes are present even in pre-hatched larvae that have never fed and do not contain plastids — strongly suggesting that the genes have been incorporated into the slug germline DNA and are vertically inherited. Another lab zeroed in on a gene from photosystem II (psbO) and found it in the DNA from E. chlorotica eggs — more evidence for germline transmission. Looks like this is an instance of horizontal gene transfer (HGT) between two eukaryotes, from the nuclear genome of the algae to that of the slug.

E. chlorotica is not the only "solar-powered" sea slug. E. clarki, found in the Florida Keys, maintains its plastids for up to 4 months. More accomodating than E. chlorotica, it acquires plastids from four different species of algae — sometimes housing plastids from two or more species in the same cell. 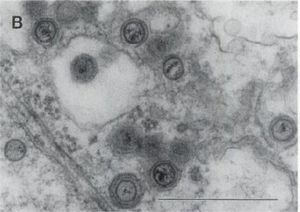 Mature icosahedral viruses with double envelopes budding into cytoplasmic vacuoles in a hemocyte from a dying slug. Bar = 0.5 µm. Source

These stories leave us wondering just how this particular HGT might have occurred. It's a long way from the nucleus of an alga being digested in the gut of a sea slug to the nuclear DNA in the slug's germ cells. No definite answers yet, but some suspect that an endogenous retrovirus may have played a role. Evidence? First, a brief digression back to the slug life cycle. The entire adult population dies synchronously each spring. Slugs in lab aquaria die at the same time as those in the field, regardless of the time of year when they had been collected.(How’s that for timing?) TEM of dying slugs, but not of younger slugs, revealed viruses in their cells. The enveloped icosahedral virions resemble those of known retroviruses; most tellingly, their bloom is associated with a hundred-fold increase in reverse transcriptase activity. Smaller capsids are also seen in the plastids.

Are these 'retroviruses" killing the slugs? Some of the researchers don't think so. Many cells in the dying slugs show characteristics of apoptosis, suggesting programmed cell death. The viruses might maintain a latent infection and then reactivate when the slug's defenses have been compromised. Did these viruses have something to do with the algal–slug gene transfer? Maybe. Retroviruses are a feasible vector to ferry the algal genes to the slug genome. Would be nice to have the complete genome sequence for this virus so we could see if algal genes are on board. Meanwhile, it is early summer in the marshes and another generation of juvenile slugs have gone green.