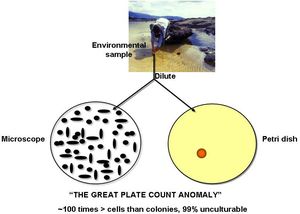 The majority of bacteria will not grow on nutrient medium in the lab. The basic experiment is simple: take a sample from the environment, such as marine sediment or soil, mix with water, vortex, allow it to settle, dilute supernatant and take two droplets. Plate one on a Petri dish with LB medium, and place the other on a microscope slide (adding a dye such as DAPI helps). Count the number of cells under the microscope and the number of colonies on the Petri dish — the result will be “The Great Plate Count Anomaly.” About 100 times more cells will be observed microscopically than colonies counted on the Petri dish (Fig. 1). This simple result is one of the most profound puzzles in microbiology, and one of the most significant unsolved questions in biology. Indeed, microorganisms probably make up the bulk of the total biodiversity of species on the planet, but we do not have access to the vast majority of them. Importantly, most Divisions — the largest taxonomic units — do not have a single cultivable representative, and we know of their existence only from 16S rDNA isolated directly from the environment.

Figure 2. Growing the uncultured in agar, between semi-permeable membranes, in their original environment.

There are two basic approaches to solving a problem, and one of them is to decide that it does not exist. It has been suggested on the pages of Nature and Microbe that the anomaly only exists in our minds and results from the insufficient number of microbiologists with a “green thumb” willing to tinker with growth conditions. However, the anomaly has existed for over 100 years, and tinkering by generations of scientists produced only minor improvements. A serious effort was mounted by several groups to culture representatives from the ubiquitous TM7 division, for example, but produced no results.

What I find most fascinating in the problem of uncultured bacteria, however, is not the existence of exotic strangers such as TM7, but the fact that many — if not most — “unculturable” organisms are close relatives of common garden-variety bacteria such as Bacillus subtilis or Pseudomonas aeruginosa. Judging by the genomes of their relatives, the uncultured organisms should grow on almost anything, yet they grow on nothing in the lab, including yeast extract which contains the entire metabolic map. They do grow in soil or marine sediment, so should be able to consume degradation products of plants and animals, which would be sugars and amino acids. The puzzle is truly perplexing. 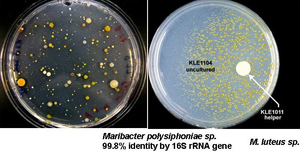 Figure 3. A sample from marine sediment biofilm is inoculated on a Petri dish with rich medium (left panel). Inoculating colonies from this plate pairwise (right panel) allows to identify uncultured organisms and their helpers. Material from one colony, KLE1104 (close relative of cultivable M. polysiphoniae) was spread evenly over the plate, while cells from another colony, KLE1011 (related to M. luteus) were patched in a single spot. KLE1104 colonies only form around KLE1011.

Given the unsuccessful 100 year-old quest for a good medium, we gave up on the hope of recreating it in a Petri dish. Instead, we decided to grow the uncultured in their natural environment, where one cannot possibly fail! Enclosing a marine sediment sample mixed with agar between semi-permeable membranes and placing it back in its original environment then allows for free diffusion of compounds through the chamber (Fig. 2). The bacteria are tricked into perceiving this diffusion chamber as their natural habitat, and form colonies. Similar approaches of culturing in their natural environment resulted in cultivation of dominant pelagic Pelagibacter ubique by Steve Giovannoni’s group, and Prochlorococcus by Zinser and co-authors.

One useful clue to the nature of uncultivability came from our observation that some uncultured organisms will only grow in the presence of cultivable species from the same environment (Fig. 3). Using this as an assay, in collaboration with Jon Clardy’s group we discovered that growth factors for many uncultured species from biofilms enveloping marine sand grains are siderophores, chelators of insoluble Fe(III) (Fig. 4). Some species are fairly promiscuous in taking up siderophores, while others, such as a distant relative of Verrucomicrobia, will only grow in the presence of a siderophore from a particular neighbor.

Figure 4. A culturable helper releases a siderophore that captures insoluble Fe(III) and brings it into the cell. The same siderophore/ Fe(III) complex is captured by an uncultured bacterium which is unable to make its own siderophores.

But why would bacteria lose the ability to make a factor necessary for capturing an essential nutrient, thus becoming dependent on their neighbors? This dependency, of course, leads to loss of liberty; uncultured species can no longer colonize new territory. Simple advantages of thievery are unlikely to provide a credible explanation. Indeed, siderophore piracy is well-known among bacteria, but the cultivable pirates retain their own siderophore operons and turn expression on when iron gets low. I think that the reason for the loss of siderophores is to prevent adaptive evolution in new environments. Any time a cell finds itself in new surroundings, it will evolve to increase its fitness. This newly evolved organism is unlikely to outcompete resident species that spent millions of years adapting to the same environment, and will die out. Going back to their original environment is not an option either; they are not the same now and will be less fit than their parents (Fig. 5). Figure 5. Upper panel Death by an evolutionary dead-end. A culturable bacterium propagates in its familiar nich (yellow) and sheds off a cell that travels to a new environment (grey) where it attempts to adapt by evolving new features and losing some old ones. It is unable however to compete with a resident species (purple), and is no longer competitive with the parent strain. Lower panel An uncultured organism depends on a growth factor from a neighboring species. If a cell finds itself in an unfamiliar environment, it stops dividing and waits for a ride back, where it resumes productive propagation.

This scenario has been described for our pathogens such as P. aeruginosa which looses a large number of genes, including virulence factors and proteases, while adapting to the environment of the lung of cystic fibrosis patients. The result of such runaway evolution is a dead end; the pathogen can neither infect new hosts nor return to soil, its other major habitat. This is probably the main fate of weeds like P. aeruginosa or E. coli — death by adaptive evolution. The other 99% of species choose where they live and grow. If they find themselves in an unfamiliar environment, then the best strategy is to go into dormancy and wait for a ride back home. This strategy is very similar to what we know about spores of cultivable species such as B. subtilis. Spores will germinate on any nutrient environment, but the probability of germination is greatly increased in the “correct” environment. Alanine (for reasons we do not understand) is a good germinator, and so are products of peptidoglycan hydrolysis from neighboring species. B. subtilis seems to be an intermediate between a true uncultured species and a weed like E. coli.

What is next? The siderophore story suggests that there are other growth factors to be discovered that indicate a familiar environment to the unadventurous uncultured. (Next year: the uncultured from the Human Microbiome.)

All figures courtesy of Kim Lewis.

Kim Lewis is Professor of Biology and Director of the Antimicrobial Discovery Center at Northeastern University.