An Inactive Mine Provides Active Opportunities

“...a riddle, wrapped in a mystery,
inside an enigma...”
Winston Churchill 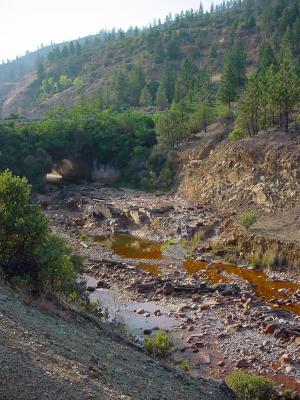 Acid mine drainage in Spring Creek  downstream from the Richmond Mine, part of the Iron Mountain Mine Superfund Site nine miles northwest of Redding, Calif. Microbes inside the mine eat pyrite — fool's gold — to produce sulfuric acid, creating the most acidic groundwater ever measured. Spring Creek flows eventually into the Sacramento River. (UC Berkeley) Source

Metagenomics is a fine tool indeed for surveying a microbial community in concert, treating both the cultured and uncultured equally. When the sample studied is rich in microbial variety, as often is the case, the pieces of genomes can be reluctant to reveal the genetic heritage of whole microbes. But there are a few particular environments that are dominated by a handful of species at most, and here this approach allows the reconstruction of complete genomes. That is the case with the acid mine drainage from mineral or coal mines. When mining ceases, all hell can break loose (anthropocentrically speaking). Microbes oxidize sulfides such as pyrite (iron sulfide) into sulfuric acid, which in turn solubilizes iron, copper, arsenic, silver, gold, and other heavy metals. Water no longer being pumped from the mine, this gemish of minerals emerges from seeps and other openings to become a highly toxic, low pH stream that eventually pollutes larger bodies of water. But for some bacteria and archaea, this is a juicy place to live and thrive.

The most acidic water known anywhere emerges from the Richmond Mine, near Redding, in Northern California. This mine, inactive since 1963, has been studied by members of Jill Banfield’s lab at Berkeley, who have amassed an impressive amount of microbiological information. Favored for study are thick, slimy, pink microbial mats sitting on green water. Here, the dominant organism tends to a bacterium, Leptospirillum sp., sufficiently abundant that its genome could be reconstructed from metagenomic data. 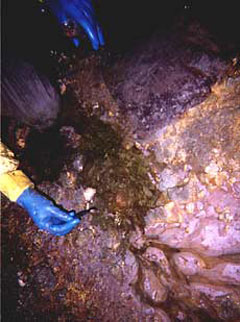 A researcher collects samples of the pink biofilm floating atop hot, green, acidic pools in the Richmond Mine at Iron Mountain, California. (Brett Baker/UC Berkeley) Source

In addition, some unusual archaea found here turned out to be, as the authors say, enigmatic. They can be identified with fluorescent probes within biofilms that they term “blanket strips.” We asked Dr. Banfield for further enlightenment: Blanket strips is a term to describe the appearance of the biofilm. Imagine a pink fluffy blanket cut into strips. These are floating on hot water at a pH between 0.5 and 1.5 (low enough to dissolve the metal eyelets of the researchers’ boots). As an aside, she also shared with us that working underground at this site is like an extreme sport (it is extremely hot and humid). These organisms have been called ARMAN (for Archaeal Richmond Mine Acidophilic Nanoorganisms) and have been found in other environments as well, such as boreal wetlands and a New Zealand hot pool.

When it comes to the unique ARMAN attributes, one hardly knows where to begin. First, ARMANs are very small, even for environmental organisms, which tend to be on the slim side. ARMANs are 200 – 400 nm in diameter and able to pass through 450 nm filters. Their volume is a puny 0.009 µm3 to 0.04 µm3. 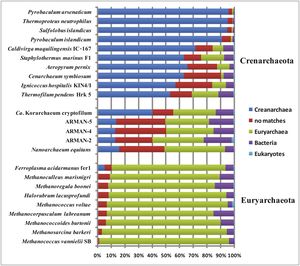 (Click to enlarge) The taxonomic affiliations of the top blast hit for all proteins from each
genome to the KEGG genome database. Source

Next, their genomes. For some of the analyses, the cells in question were concentrated by filtration. Genomes of the three strains under study have about 1 million bp and therefore are among the smallest known for free-living organisms. As expected from such parsimony, most of the DNA codes for proteins. Many genes are about 10% shorter than usual, which is also true for some obligate parasites such as the archaeon Nanoarchaeum equitans and the bacterium Neorickettsia sennetsu. So far, so good, but what is surprising is that their genomes straddle major evolutionary divides. Phylogenetically, they fit within the Euryarchaeota, yet the majority of their genes that can be assigned to COG’s (clusters of orthologous groups) are of the Crenarchaeota type. Just as surprising, as many as 21% of their genes look like they are bacterial! And some 25 – 38% of the genes, depending on the strain, have no homologies with anybody else. Where then do these waifs belong? Analysis of their 16S RNAs and several protein genes suggest that they fit near the root of the Euryarchaeota. But is this shoehorning them? We expect that the parentage of these odd organisms will be scrutinized further.

Even now, mining the ARMAN genomes is a rewarding undertaking. One finds a number of characteristics shared with symbiotic or parasitic microbes, e.g., genes that are short, some that are split, and some that overlap with others. All this, plus the small genome size, suggests that ARMANs may not be able to make a living alone, relying instead on other members of their community for some resources. Indeed, looking at these organisms by cryo-EM reveals that, at least in some 3D reconstructions, ARMAN cell walls look like they are penetrated by other archaea belonging to the cell wall-less Thermoplasmatales. If so, who is parasitizing whom? Is this a way for the ARMANs to get nutrients? And yet more puzzles. To quote the authors: almost all cells contain a mysterious tubular organelle that is roughly 200 nm long and 60 nm wide. What’s this all about? Also visible are viruses attached to their surface. Lacking CRISPR defensive sequences, ARMANs may be ready prey to viral infections. 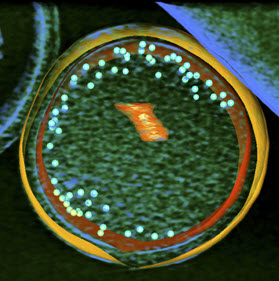 Slice of an ARMAN cell with the inner membrane in orange and outer membrane in yellow. Ribosomes are represented with light blue spheres drawn to scale. A tubular structure is shown in orange. Such tubes range in diameter from 58 to 62 nm and the length is ~200 nm. Source

One last point, perhaps not as surprising as the rest, but noteworthy nonetheless. These cells have only a handful of visible ribosomes, as few as 92 per cell, which suggests that they are not growing fast. For perspective, consider that a fairly slow-growing E. coli has some 10,000 of them! But in this special environment, perhaps one need not hurry to outcompete one's neighbors.

The ARMAN names may not last long, so fancier names have been proposed. Being uncultured, they have to bear the “Candidatus” designation, hence Ca. Micrarchaeum acidiphilum for one, Ca. Parvarchaeum acidiphilum for another. The Garden of Archaeal Wonders continues to surrender some of its secrets. And well it might, as more and more “archaeologists” are presently at work. Surely many more surprises are in stock. But it’s worth noting that now, given only a short few years, dedicated researchers can go from the discovery of novel and exciting organisms to the elucidation of many of their characteristics.