« When the End Is the Story | Main | Plasmalogens Have Evolved Twice » 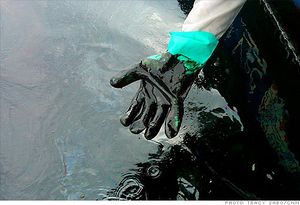 The old saying “pouring oil on troubled waters” is a metaphor for bringing peace to a turbulent situation. Recent events in the Gulf of Mexico have proved the contrary, that oil poured (or spilled) upon seawater can produce the very antithesis of calm. After many weeks of concern, and with the long term threat of possible subsurface oil still strong, recent reports note that the oil slicks at the surface have become more difficult to find. What is happening? To be sure, dispersal over time is inevitable, but there may be more to the “vanishing” oil slicks.

What we perceive as the leakage of a toxic fuel into the ocean might be seen as an aliphatic feast by marine microbes. Quite a bit of literature describes the relationship that microbes have with oil (for a review, click here) and the possible role for such microbes in bioremediation of oil spills. 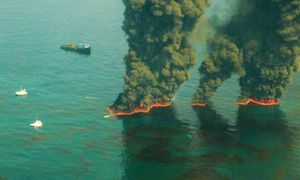 Researchers who investigated the aftermath of prior oil spills found that microbes can be involved in the amelioration of such accidents, acting as natural bioremediation agents, as we'd expect on Planet Microbe. Alkane-degrading microbes can in fact increase in population in response to petroleum contamination, as observed in studies ranging from Antarctica to Spain. However, such studies tend to focus on the impact of oil on shorelines instead of on the ocean surface itself. As I watched televised coverage of the spreading oil slicks in the Gulf, I recalled a short paper I had assigned to my latest microbiology class, which suggested that the very surface of the ocean itself could be thought of as an enormous, but very thin, biofilm. This short review by Cunliffe and Murrell credits the biological oceanographer John McN Sieburth with visualizing the air-sea interface as a gelatinous microlayer — a huge biofilm that may cover 70% of the Earth’s surface! (Click here to listen to an interview with Michael Cunliffe.) 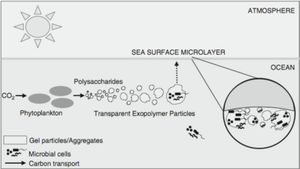 A diagrammatic representation of the neuston including the bacterioneuston and TEP. Source

The upper millimeter of the ocean with its inhabitants is referred to as the neuston, its clearly distinctive microbial communities as the bacterioneuston. These communities reflect the specific environmental and nutritional conditions to be found in that microlayer in marine, estuarine, or fresh water environments. Transparent exopolymer particles (TEPs) synthesized by primary producers form the “lattice” that appears to hold the bacterioneuston in place (see figure). TEPs can act as a food source as well as surfaces for microbial colonization, as they float upward and merge with the presumed surface biofilm.

One study found that the bacterioneuston, in contrast to the microbiota found half a meter below the surface, is dominated by two genera: Vibrio and Pseudoalteromonas. Both appear to be well adapted to life in a biofilm at a liquid-solid interface. It would be interesting to learn if mutants of such bacteria that are defective in biofilm formation on solid substrates are also impaired in their ability to colonize the neuston. The recent oil spill in the Gulf of Mexico obviously is relevant to this topic. Just as “fertilization” of areas where oil reaches the shore can accelerate bioremediation by supporting luxuriant microbial growth (including alkane degraders), it would be no surprise to learn that the bacterioneuston in the area of the oil spill has undergone a change in population structure and function while taking advantage of the oil as an unexpected source of energy and carbon. I am quite certain that microbiologists are investigating this, and I look forward to learning how the Gulf bacterioneuston responds over time. While an oil spill can cause great damage, it may also yield insights into how marine microbial ecology responds to abrupt change, particularly change precipitated by human actions.

Philosophically, it is awe inspiring to think of the entire surface of the oceans as a nearly two-dimensional biofilm spanning the globe, a world apart from the water column beneath. This floating world beckons to us to explore the population structure of the marine bacterioneuston living therein. With the knowledge gained, we may be able to assist Nature in what we perceive as the natural “clean up” processes that are the microbial world’s response to nutritional and environmental change.

In his novel, Solaris, the late science fiction writer Stanislaus Lem described a world-spanning ocean that was itself sentient. I am not prepared to go quite that far with this concept of a thin, ocean-spanning biofilm, even though microbial communication surely takes place therein. Nevertheless, this concept certainly has made me look at the expression of pouring oil on troubled waters in a new light. Perhaps we need a new aphorism for peace making, one that encourages the formation of robust surface biofilms to minimize disruptions!

Mark O. Martin is an Associate Professor of Biology at the University of Puget Sound in Tacoma, Washington, and an Associate Blogger for Small Things Considered. He remains an unrepentant microbial supremacist.