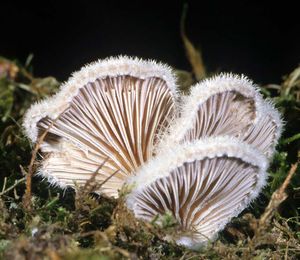 As luck would have it, two pieces of writing on the sex habits of fungi appeared within days of each other. One is light reading, a post in the admirable Cornell Mushroom Blog entitled A Fungus Walks Into a Singles Bar. This is a précis into the complex story of fungal sexuality. It takes you friendly fashion through the maze of mating types and multiple “genders.” One mushroom, Schizophyllum commune, has more than ten thousand of them! (I once proposed sitting around and making up names for at least a few dozen of them. Any takers?) While you are there, have a look at some spectacular movies of mushroom development, especially stinkhorns (yes, again). 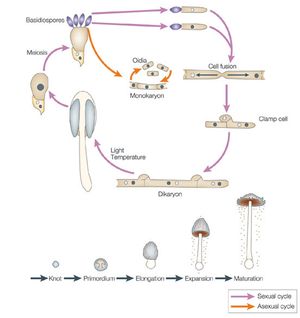 (Click to enlarge) The life cycle of a basidiomycete, the mushroom Coprinus cinereus. Source

More technical is a paper by a duo of Finnish and German researchers who studied the sequenced genomes of 8 basidiomycetes, along with that of yeast (an ascomycete), looking for genes that speak to the structure and organization of mating types. First of all, these genes are highly conserved; fungi don't bother to reinvent the wheel. Mating type genes encode sex pheromones, some of which have been well studied. The authors conclude: In silico analyses now also permit the identification of putative components of the pheromone-dependent signaling pathways. Induction of these signaling cascades leads to development of dikaryotic mycelia, fruiting body formation, and meiotic spore production. In pheromone-dependent signaling, the role of heterotrimeric G proteins, components of a mitogen-activated protein kinase (MAPK) cascade, and cyclic AMP-dependent pathways can now be defined. The story is complex, but far from lacking in fascination.