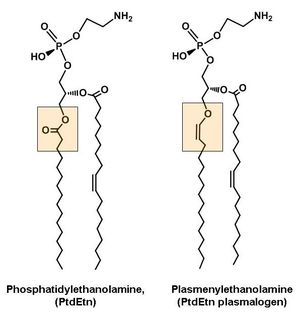 Some biologists go blissfully through life without paying much attention to lipids. They do this at their own risk, because there are innumerable things to be learned from their study, including, as we will see here, many relevant to the understanding of evolution. Lipids come in unexpected and exciting varieties, a point that has been acknowledged in this blog (for examples, see here and here)

The lipids that make up the membranes of prokaryotes are polar, that is, they have a moiety such as phosphate, linked to one of the carbons of their glycerol backbone (non-polar triglycerides are generally not known to be made by prokaryotes). The lipids of aerobic and facultative bacteria are mainly of the phospholipid or glycolipid type, in which the first two carbons of the glycerol backbone are linked to long-chain fatty acid esters (Figure). The situation, however, is different in many anaerobes, including both Gram-positive and Gram-negative species, in which the membranes contain both diacyl lipids and compounds known as plasmalogens, in which the chain linked to the first carbon of the glycerol is attached through an O-alk-1’-enyl ether bond (Figure) rather than an ester bond. Plasmalogens were accidentally discovered by Robert Feulgen in 1924. He observed that the cytosol of animal cells turned red when stained with a colorless fuchsin-sulfurous acid reagent, aka known as the Schiff reagent. Such staining reveals compounds that contain aldehyde groups. The red color did not appear if Feulgen’s preparations were first treated with alcohol. He called these compounds plasmalogens meaning “aldehyde-forming substances found in the plasma.” It wasn’t until the 1950s that the correct structure of these ether lipids was worked out. Feulgen and others found plasmalogens in many animal tissues; they are present in especially high concentrations in the brain, CNS, and muscles. Indeed, >60% of the phosphatidylethanolamine (PtdEtn) of our brain is in the plasmalogen form. 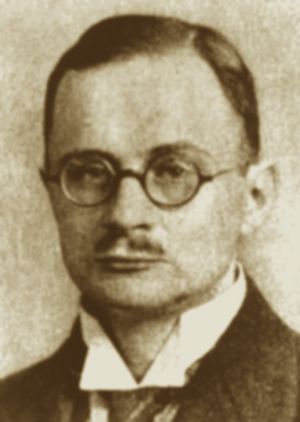 In the late 60s and early 70s the biosynthetic pathway for plasmalogen synthesis in animal tissues was elucidated. It was found to start with the acylation of dihydroxyacetone phosphate (DHAP), rather than with glycerol-3-P as is the case for diacyl lipids. A saturated ether bond is formed by replacement of the acyl chain on DHAP with a long chain alcohol. A number of remodeling steps lead to a form of PtdEtn containing the saturated ether bond. The last step is an aerobic desaturation of the saturated ether between the first and second carbons yielding plasmenylethanolamine, the plasmalogen equivalent of PtdEtn (figure).

But among bacteria today only anaerobic species contain plasmalogens. In these organisms, the final oxygen-requiring desaturation reaction is not possible. Furthermore, we know through studies with tritium-labeled glycerol, that bacteria do not use DHAP for plasmalogen formation. Clearly they have another pathway, one that most likely evolved long before these lipids were made by animal and plant cells. The early earth had an anaerobic atmosphere; hence the first living things were anaerobes. Indeed, reactions essential for making bacterial cells — including amino acids, purine and pyrimidine bases, lipids, and essential cofactors — are still anaerobic, in line with their anaerobic ancestry. Present evidence suggests that plasmalogen synthesis in bacteria follows the same pathway used for the formation of diacyl phospholipids, a pathway starting with glycerol-P, but in this case the conversion of diacylphospholipids to the corresponding plasmalogens is carried out via an unknown mechanism.

So, plasmalogens appeared early, but did not survive in aerotolerant and aerobic bacteria. Why not? A clue comes from the finding that the alk-1-enyl ether bond in plasmalogens is broken by reactive oxygen species (ROS) such as superoxide, hydroxyl free radicals, and singlet oxygen. As oxygen increased in the earth’s atmosphere, respiration, with its ability to generate lots more ATP than fermentation, evolved in bacteria. ROS are formed in cells during respiration, typically at the last step in the electron transport chain. This created a problem that aerobes had to solve. The simplest solution was to get rid of plasmalogens and replace them with lipids containing only acyl esters. This process can even be replicated in the laboratory today (see here and here). The separate evolution of Archaea reveals another solution; they make lipids with chemically stable, saturated ether bonds. 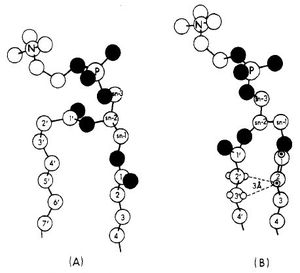 As plants and fungi evolved, they appear to have done well without plasmalogens, but in the simplest animal cells plasmalogens reappear, here made by an aerobic mechanism. Oxygen became an essential reactant for protozoa and metazoa. It is needed for making the sterols and steroid hormones, polyunsaturated fatty acids and eicosanoids formed from them, for the synthesis of certain amino acids, and as noted here, for the synthesis of plasmalogens as well.

But why are plasmalogens needed by animals and why have they been retained in anaerobes? Plasmalogens have a different three-dimensional structure from diacyl lipids, one that allows them to pack more closely, thus rendering membranes less permeable. This may account for their presence in conductive tissues such as the CNS. Further, they can be cleaved by specific enzymes, thus regulating the production of free fatty acids such as arachidonate, the precursor of eicosanoids. It seems that nature rediscovered a useful molecule and learned to make it by a new mechanism. This poses another puzzle: how do animal cells which make ROS avoid the potential damage they can do to plasmalogens? The answer appears to be that, unlike bacteria, they can repair the damage by acylation of the resulting hydroxyl group at the first carbon of the glycerol backbone. Interestingly, this has been proposed as a mechanism to detoxify ROS. It seems that nature has turned the tables!

Howard Goldfine is Professor of Microbiology at the University of Pennsylvania School of Medicine.

Moselio Schaechter on August 30, 2010 at 10:00 AM in Evolution, Physiology & Genetics, Teachers Corner | Permalink