When the End Is the Story 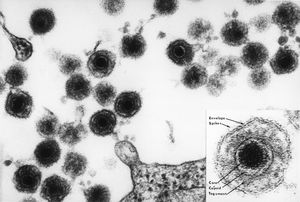 It looks like a herpesvirus, but does it replicate like one? Electronmicrographs showing mature HHV-6 particles emerging from an infected cell. Source

Sometimes, discovery in biology is about discerning rules and sometimes it is about pursuing exceptions. In this spirit, Human Herpesvirus six (HHV-6), the etiologic agent of the common childhood illness roseola infantum, is shaping up to be an intriguing exception. As every virologist knows, members of the Herpesviridae maintain their large double-stranded DNA genomes (typically 100-250kb) as autonomous, covalently closed circles (episomes) during latent infection of host tissues. Nevertheless, there is now convincing evidence that the HHV-6 genome can, at least on occasion, become integrated into host-cell chromosomes. Interestingly, the first hints that this could happen did not come from hypothesis-driven laboratory experiments, but from a handful of clinical case reports of individuals with exceptionally high levels of HHV-6 DNA in peripheral blood.

HHV-6 was discovered in 1986, and its sibling, HHV-7, in 1989. In 1988, a link between HHV-6 and roseola infantum was established. Together HHV-6 and HHV-7 are now categorized as Roseoloviruses, constituting their own genus within the family Herpesviridae. As with the other human herpesviruses, HHV-6 and HHV-7 infections are widespread among humans, but are generally not associated with severe pathogenesis except under conditions such as acquired or induced immunodeficiency. Of the eight known human herpesviruses (officially referred to as HHV-1 through HHV-8), most of us have heard of the Herpes simplex viruses (HHV-1 and HHV-2), the agents behind cold sores and genital sores, respectively, and we are familiar with Varicella Zoster virus (HHV-3), the cause of chickenpox, and Epstein-Barr virus (HHV-4), the cause of “kissing-disease” (infectious mononucleosis).

In contrast to the voluminous research accorded to their more notorious relatives, the scientific literature on the Roseoloviruses is scant. Nonetheless, a quick search of this literature turns up something peculiar—a smattering of case reports describing families in which HHV-6 DNA appears to be inherited vertically. Importantly, the viremic individuals within such families include one parent and at least one child. In some studies, fluorescence in situ hybridization (FISH) using HHV-6 sequences as probes revealed a close physical association between HHV-6 DNA and human chromosomes in the cells of the afflicted individuals. Combined, this gives rise to the rather fantastic notion that HHV-6 can, from time to time, find its way into an individual’s germline DNA and be passed on to the next generation. When this happens, afflicted individuals have HHV-6 viral DNA in every nucleated cell in the body.

The phenomenon of chromosomally inherited HHV-6 is unprecedented in two respects. First, no other human herpesvirus is known to integrate its DNA into the host cell chromosome. (In fact, stable maintenance of episomal DNA is widely viewed as central to the legendary ability of herpesviruses to maintain lifelong, persistent infections.) Second, aside from these studies, there are no reports in which a virus has been documented to enter the germline of a modern human and to subsequently be passed on to a child. Animal genomes, including our own, are full of ancient retroviral sequences (see our post), and the smart money would have been on a retrovirus, rather than a herpesvirus, to be the first to achieve this feat in modern times.

Fluorescent in situ hybridization (FISH) high-lighting telomeric regions at the ends of cellular chromosomes (bright spots correspond to fluorescent, telomere-specific DNA probes). Like cellular chromosomes, human herpes-viruses HHV-6 and HHV-7 also have telomere-like repeats at the ends of their genomes. The function of telomeres in the viral genomes remains a mystery, but recent data suggest that they may facilitate insertion of the viral genome into host cell DNA. Source

At first glance, the genomes of HHV-6 and HHV-7 resemble the typical herpesvirus genome. They are >150 kb long, double-stranded DNA molecules bracketed by long, direct repeat regions; they contain specific cis-acting signals required for DNA replication, and, like the typical herpesvirus genome, they are estimated to contain more than one hundred open reading frames. However, a notable peculiarity of the Roseoloviruses is the presence of hexanucleotide repeats composed of the sequence TTAGGG at both the 5’ and 3’ ends of their genomes. Why is this peculiar? Because TTAGGG also happens to be the sequence of the mammalian telomeric repeat, strings of which are found at the ends of every cellular chromosome. Telomeric repeats are added to the 3’ ends of chromosomes by the cellular DNA polymerase known as telomerase, and are essential for the cell to distinguish the ends of linear chromosomes from 3’ ends generated by DNA breaks. A functional role for the TTAGGG repeats in the viral replication cycle has not yet been established, although they most certainly play a role, viral genomes not being known for their tolerance of extraneous, unnecessary sequence. Telomeric repeats have also been seen in two other herpesviruses: Marek’s disease virus (MDV) of chickens and Equine Herpesvirus 2 (EHV-2). Given the phylogenetic distance between these viruses, it is likely that the presence of telomeric sequences has evolved more than once in the history of the Herpesviridae. 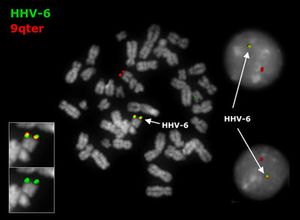 Arbuckle and colleagues at the University of Southern Florida undertook a detailed molecular study of several families with inherited HHV-6 and published their findings earlier this year. These investigators first used FISH to confirm the presence of HHV-6 DNA associated with chromosomes in multiple individuals from each of four families with high levels of HHV-6 DNA in blood. Although the particular chromosome involved differed from one family to the next, HHV-6 DNA was invariably found close to the end of one chromosome. Within each family, HHV-6 DNA was associated with the same chromosome, supporting the notion that the HHV-6 sequences in each family were being vertically inherited just like any other genomic locus. The investigators also used PCR amplification to capture and sequence the junctions between HHV-6 DNA and cellular chromosomal DNA by employing primer pairs, one specific for the ends of the chromosome, the other for a sequence within the viral genome. Sequencing of the PCR products revealed virus-host DNA junctions within chromosomal telomeric repeats, confirming that the HHV-6 DNA was indeed covalently integrated into the host genome.

The maintenance of an integrated copy of a herpesviral genome through at least two host generations is nothing short of amazing. The HHV-6 genome is >150 kb long, and contains a wealth of genes, many of which are likely to be involved in viral immune evasion. What are the consequences of carrying viral sequences in the germline, having them present and possibly expressed in cells throughout the body? Are some or all of these sequences seen as “self” by the person’s immune system? Does successful inheritance of chromosomally integrated HHV-6 possibly require additional molecular events, such as a mutation or the inactivation of part or all of the viral genome?

Over 90% of humans are seropositive for HHV-6, yet reports of families with inherited, chromosomally integrated HHV-6 are few. This suggests that integration of the HHV-6 genome into human germline DNA is not a typical outcome of HHV-6 infection. There are several possible reasons for this, e.g., HHV-6 infection of germline tissues may occur with very low frequency, or the majority of HHV-6 integrations into germline DNA may be deleterious and consequently never passed on to a new generation. Nevertheless, the mere existence of integrated HHV-6 DNA in these families raises a somewhat heretical idea: could this particular herpesvirus have evolved to use integration as an essential step in its infectious cycle? In other words, does integration happen as a matter of course in the somatic tissues where HHV-6 normally replicates?

The study by Arbuckle and colleagues provides some clues. Using peripheral blood lymphocytes from families with integrated HHV-6 DNA, the investigators were able to induce lytic viral replication in culture. While not directly proving that integration is essential, this experiment is important because it demonstrates that integrated HHV-6 DNA is functionally capable of expressing progeny virus. In a separate experiment, standard cell lines (JJHAN and HEK293T) were experimentally infected with a laboratory strain of HHV-6 in culture. After allowing the virus to replicate and spread in these cells, the investigators were able to detect newly integrated HHV-6 DNA, proving that integration can also occur here as a consequence of viral replication. Does this mean that integration is the rule for HHV-6? Herpesviruses replicate their DNA in the nucleus, so integration by homologous recombination may happen from time to time simply as a matter of chance, without having any bearing on the biology of the virus. In the case of HHV-6, homology provided by the telomeric repeats may simply increase the probability of this taking place. However, the same investigators were unable to detect episomal forms of HHV-6 DNA in experimentally infected cells. Although this constitutes a negative result, the observation is consistent with the possibility that HHV-6’s strategy for replication and latency is distinct from that of other herpesviruses.

The precise molecular events that give rise to inherited HHV-6 remain to be deciphered. Based on the presence of telomeric repeats at the ends of the HHV-6 genome, Arbuckle and colleagues favor the view that homologous recombination is involved. While plausible, one can also imagine alternative mechanisms, perhaps ones employing viral gene products that target the viral genome specifically to the telomeres. The telomeric repeats associate with a complex of cellular proteins involved in protection and replication of chromosome ends. Is it possible that the viral repeats also interact with the cellular telomeric machinery, possibly hijacking cellular complexes to meet the virus’s own ends (pun intended)? If integration turns out to lie at the core of the HHV-6 replication cycle, how then does an integrated genome embedded in a large chromosome serve as the template for producing unit-length progeny viral genomes? Could viral genome replication have deleterious effects on the physical integrity of the host cell chromosome, or conversely, might the virus regulate integration and replication in a manner consistent with host-cell viability?

The list of questions raised by these observations is long indeed, and should prove intriguing to virologists. Such questions also mean that the Roseoloviruses are primed for a share of the limelight heretofore accorded to their more famous HHV cousins.