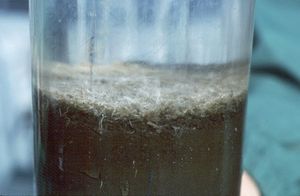 An underwater microbial mat has been found in fairly shallow waters off the coast of Chile and, according to headlines (click here and here), it’s the size of Greece, or about 132,000 km2 (or for us norte-americanos, about the size of Alabama). These communities of sulfide-oxidizing bacteria have been known for some time, but their attention has been highlighted by the recent version of the Census of Marine Life. In fact, they were discovered in 1963 by the oceanographer and microbiologist Victor Gallardo of Chile’s University of Concepción. Scientists may not have known much about these huge mats much earlier on, but the local fishermen sure did and called them estopa, Spanish for burlap or unwashed wool or flax. 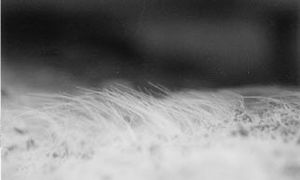 Figure 2. What the mats look like on close-up (swaying in the current?). Source

Aficionados of the giant sulfur-oxidizing bacterium Thiomargarita namibiensis and other bacterial gargantuas likely include Thioploca, the occupants of these mats, in their catalog of microbial marvels. This is a genus of gliding, filamentous bacteria that live in aquatic sediments where they face the same problem as Thiomargarita, namely how to hook up their fuel (sulfides) with their final electron acceptors (nitrates). (For details of their metabolism, see a recent paper.)

Figure 3. Bundle of T. araucae extending out of their sheath. The appearence of a braid is seen where the filaments cross over, hence the name Thioploca, ‘sulfur braid.’ Source

Sulfides are abundant in the sediment, nitrates in the water column. How to bring the two together? Thioplocas solve the problem by making tubular sheaths that stick out from the ocean’s sediment. These sheaths can be as long as 15 cm. Inside them, filaments of the organisms glide up and down, gathering sulfides below and nitrate above. Thioplocas chemotax towards nitrate. They absorb it and transport it downwards, to where the sulfide is abundant, at speeds of about one centimeter per hour. In other words, thioplocas take an elevator to work.

The two dominant species in these mats are Thioploca chileae (with cells 12 to 22 µm wide) and T. araucae (28 to 42 µm wide). Their cells, 60 µm long, are arranged end-to-end to form filaments (trichomes in the jargon) some 2 to 7 cm long, and arranged in parallel bundles within the sheath. Each cell has a huge vacuole filled with 0.5 M nitrate (that’s about a 4% solution, thousands of times the concentration in sea water) that serves as a repository of oxidant, pretty much like a scuba diver’s tank. 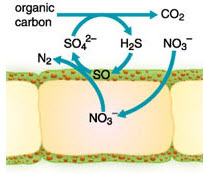 Figure 4. A schematic drawing of a Thioploca cell showing the large vacuole that occupies nearly the whole space and that contains nitrate at concentrations up to 500 mM, some 20,000 times that of the surrounding seawater. Source

The giant size of the organisms does not mean a large cytoplasm; most of the cell is a vacuole, just as in T. namibiensis. Thioplocas are close relatives of the Beggiatoa, another group of giant bacteria that oxidize sulfides — and also make giant mats in marine and freshwater environments.

The thioploca’s gelatinous sheaths get to be huge, walls as thick as 1.5 mm and as long as 10-15 cm, thus readily seen with the naked eye. The bottom 5-10 cm is buried in the sediment, thereby firmly anchoring the sheaths and making the mats very stable. The sheaths lie flat along the surface and look yellowish, according to those who have seen them. Each sheath may be shared by as many as 100 individual filaments, each of which can glide up and down independently.

I have tried to find out more about the nature of the sheaths, but have had little success so far (please inform me of what I may have missed). It is said that they consist of mucilaginous polysaccharides. But think about it. How can a bundle of bacteria make such a thick extracellular tube of the proper dimensions? Which comes first, the bundles of cells or the sheaths? The sheaths appear to be made up of layers; how do these layers get deposited? The outside of the sheaths seems to pick up minute pieces of detritus. Is the surface sticky? And is there someone in the vicinity who likes to munch on these probably nutritious sheaths? More questions, please.

Figure 5. Thioploca in their transparent sheaths sieved and washed from a sediment sample. The field of view is 8 mm across. Source

It gets even more interesting. Other inhabitants of the mats also live in the sheaths, especially the upper portions. These include filamentous sulfate-reducing bacteria, smaller than the Thioploca, thought to be members of the heterotrophic genus Desulfonema. At other oceanic sites, yet other “endosymbionts” are found with the Thioploca where, it is thought, they contribute to sulfur cycling within the sheaths by providing at least some of the sulfide needed by their larger hosts.

The total biomass of these mats is staggering. A square meter of mat at its densest weighs nearly one kilogram (wet weight), some 90% of which is due to the sheaths. The extent of these mats is not known, although they are thought to occupy thousands of square kilometers, possibly spanning an area from Chile to Columbia — the length of South America. Note that the weight of the mat in a single square kilometer may approach 1000 tons! Or, if you prefer African elephant-equivalents, the weight of about 200 such pachyderms/km2. Whatever metric you prefer, this is one of the largest biomass entities in the oceans and certainly one of the biggest accumulations of microbial life in any one place. Think of it next time you visit Greece. 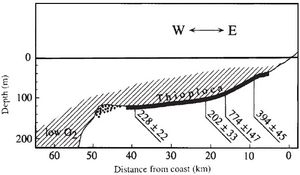 Figure 7. The continental shelf off Chile. The Thioploca mat (dark line) in a zone of low oxygen concentration (shaded area). The numbers refer to the weight in grams per square meter of four samples. Source

It is suggested in the lit that nitrate in upwelling ocean offshore of the Atacama is up to 10 mg/L, ~ 0.2 mM, one origin of desert nitrate deposits. This may be about the dissolved oxygen level in the deep current until it meets some organic nitrogen source and a passel of nitrifiers. So where are the latter? Do they live in filaments on the edge of the shelf?

Elio replies: Good question about the nitrifiers. I don't know and will try to find out.