« Bacterial Physiology and Virulence: The Cultures Converge | Main | Marine Snow: Dead Organisms and Poop as Manna in the Ocean » 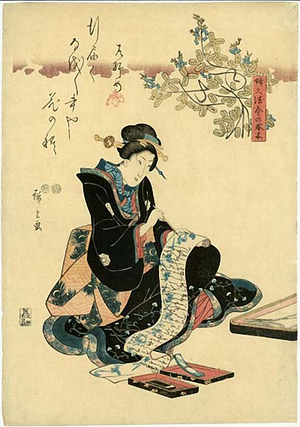 Tree of Good Writing, by Hiroshige, circa 1846. Source

There isn't any thought or idea that can't be expressed in a fairly simple declarative sentence.....
E.B. White, Fro-Joy

Just when some people believe that the world is going to hell in a hand basket, here I am, ready to make a cheerful personal statement: Scientific writing is improving! Of course I base this on reading the microbiological literature, but assume that it’s generally true. What makes me say so? Well, more often than not, current research papers and reviews contain a fair share of simple declarative sentences. In my earlier days, typical statements were often in the passive form: “The effect of X on Y has been studied.” The first person form is now accepted, much to everyone’s relief. And titles of articles tend to informative. Gone is Studies on the metabolism of Escherichia coli: Part XIV. And, although I couldn’t swear to it, I believe that the language in graduate student papers has also improved. Nowadays, even humor is permissible. It has even permeated this blog, as exemplified by the wicked sense of humor of my co-blogger, Merry, who has come up with titles such as The Bacterium That Doesn’t Know How Tie Its Own Shoelaces, Coxiella Escapes From Cell, and A Holin One.

What has happened? Have scientists turned into Hemingways overnight? Good question. I would guess that changes in culture (sensu lato) are the big factor. We seem to be more factual in communication and less prone to circumlocutions and Victorian adornments of speech. So, this may well be part of a general development, but what about its roots? What caused these cultural changes? I am no wiser.

This personal rapture was set off by perusing the 2010 issue of the Annual Review of Microbiology. It struck me that the articles I read are especially well written. I call as witnesses a few reviews by people I know. These include pieces by Kim Lewis (Persister Cells), Eric Rubin (and Michael C. Chao, Letting Sleeping dos Lie: Does Dormancy Play a Role in Tuberculosis?), and one by that master colorist of the microbial literature, Kevin Young (Bacterial Shape: Two-Dimensional Questions and Possibilities). Read and see for yourself.

Editors' Note: We received the following response from Michael Yarmolinsky.

On the Quality of Scientific Writing

Elio, in a posting of September 16, 2010, comments on the improved quality of scientific writing (in the literature of microbiology). Simple declarative statements are found in greater abundance; the passive voice is no longer used to avoid the first person; the titles of articles are more likely to come to the point and unlikely to be part of a numbered series; and humor is permitted. An examination the implications and possible causes of the “changes in culture (sensu lato)” that Elio views with approval may interest, and perhaps surprise, the readers of this blog.

With respect to the declining use of the passive voice, one cause should be obvious. It is the insistent attention bestowed on sentences in the passive voice by grammar and spell check programs. Do not let a misguided word processor intimidate you. The impersonal style in expository writing is entirely appropriate. Your processor may underline “bacteria were grown in LB,” but do not replace it with “I grew the bacteria in LB.” (Do indicate whether the recipe called for 5 g/l of NaCl or 10 g/l. It can make a difference.)

Elio cheerfully notes that titles have become more informative. The abruptness and magnitude of the change is astonishing. A shift in the style of titles, from the indicative (denoting the subject) to the declarative (asserting that something is so) was documented in 1990 by J L Rosner1. Of 2582 titles published in the Proceedings of the National Academy of Sciences from 1960 to 1969, not one is a declarative title, but by 1980 25% were declarative and after 1986 the frequency had climbed to over 45%.2

Yes, titles are more informative. But what about the reliability of the information provided? Therein lies the rub. Rosner entitled his article: Reflections of Science as a Product. As the title suggests, he saw the striking historical trend to reflect arrogance and even the loss of a guiding vision of science.

A tendency to view the science of biology as a product rather than a process has been bemoaned by various authors, most passionately by Carl R. Woese in an important essay: A New Biology for a New Century (2004)3. Both Rosner and Woese place considerable blame on Jim Watson and his disciples, for whom science would seem to be necessarily goal-oriented. This belief appears to have taken hold because goal-oriented science has been extravagantly successful.

The issues raised by Rosner’s article have been revisited more recently in medical journals, e.g. by Neville Goodman (2000)4 and Jeff Aronson (2009)5. Goodman noted an exponential increase in active verbs in the titles of clinical trial reports. He undertook a review of 24 reports of clinical interventions published in 1996 with ‘prevents’ in their titles. In at least eight of these cases the intervention had not been preventive at all. What makes this frightening is evidence, cited by Goodman, that physicians sometimes make clinical decisions from the titles of journal articles. I suspect that authors of reviews in which the bibliography runs to many hundreds of items occasionally take similar shortcuts. Goodman concludes: “There may be arguments for reviews and editorials carrying informative [in the sense of declarative] titles, but they are too often wrong to have any place in the reporting of research. Journals should ask for indicative titles, or alter investigators' informative titles during sub-editing.”

I find it comforting to know that the Journal of Bacteriology in its current Instructions to Authors disallows titles in numbered series and explicitly states: “Avoid the main title/subtitle arrangement, complete sentences, and unnecessary articles” (emphasis added). To my knowledge none of the other journals with which I am familiar recommend that their potential authors avoid declarative titles, although the rarity of such titles a mere forty years ago suggests that editorial pressure to stay with indicative titles may well have prevailed at the time.

Aronson notes with dismay that “in the last 15 years, declarative titles have found a new sponsor — evidence-based medicine. Using declarative titles was one of the declared procedures of the journal Evidence-Based Medicine, when it was launched in 1995, and in 2003, The Journal of Clinical Epidemiology started not only to publish declarative titles but also to commission them, claiming that such titles would be more informative. ‘Indicative’ titles, they said ‘give the purpose of a study’, and ‘declarative’ (or ‘informative’) titles ‘give the conclusion’. Although, as one declarative title has put it, ‘The evidence provided by a single trial is less reliable than its statistical analysis suggests” (see 5 for references).

Aronson, considering all that can be hidden from view in a declarative title, concludes “At best, declarative titles mislead; at worst they may enshrine a falsehood as a permanent truth.” This may be overstating the case, but in my view, not by much. When editors succumb to the lure of the sound-bite mentality, it is up to authors to resist. There remains the topic of humor. It would be foolish of me to inveigh against humor, as I have ventured, more than once, to be witty in a scientific context. Humor can serve as an enticement to read on. However, much of what passes for humor in the titles or texts of articles strikes me as an embarrassment and should have been suppressed by an editor or reviewer or, better still, the author.

In finding the proper balance between truth and clarity, teacher and researcher are prone to make different choices. Elio has been and continues to be a superlative teacher; his blog is admired as a teaching aid. My career in science has been almost entirely in research. If my remarks reflect a rather jaundiced view of progress, so be it. I hope they will stimulate useful discussion.

* The irony of this clearly stated and often cited observation is that there appears to be some uncertainty as to whether Bohr has been correctly quoted.

Michael Yarmolinsky brings his powerful powers of insight to examine the reasons I mentioned for believing that the quality of scientific writing may be on the rise. He suggests that the greater use of the active form may be due to grammar checking programs. I wouldn’t know as mine is turned off. Incidentally, I distrust the spelling program because it can’t tell “does not” from “doe snot.” Then come the titles. Michael agrees that they have become more informative but wonders if they may also have become less reliable. Guess what, there is even some data to suggest that. However, the studies cited by Michael are mainly of medical journals, some big on clinical trials. I don’t really know, but I wonder if this applies to non-clinical science journals. Not to be flip about it, but despite some overlap the two have different aims, thus may respond to different societal pressures. The need for the papers to be convincing may be greater in the former than the latter. More “basic” articles don’t need to “sell” themselves.