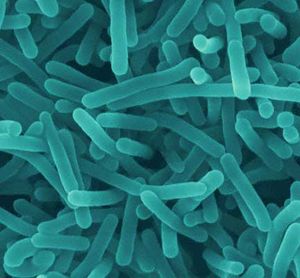 During infection, host and parasite carry out repeated and intense conversations that often rise to the level of shouting matches. The language they use is chemical, the words and sentences eloquent and forceful. Eavesdropping on the conversation between Listeria monocytogenes and immune cells of its host, Portnoy and colleagues discovered an intriguing linguistic use for a novel “second messenger,” cyclic-di-AMP (c-di-AMP).

It has been known that Listeria, like many intracellular pathogens, promotes the making of an interferon (IFN-β), which in turn signals cells of the immune system, thus activates them. But what sets this in motion? What are the signals emitted by Listeria and how are they “heard” by the host cells? The answer is that the bacteria excrete c-di-AMP, which activates the so-called cytosolic surveillance pathway. One aspect of this is the making of interferon. The immune response is now off and running; mobilized killer lymphocytes and other host defenses ward off the invading organisms.

The bacteria must be alive for this kind of immune system activation. How come? It turns out that live Listeria, like other bacteria, have powerful, multidrug efflux pumps, usually thought to be there to get rid of harmful compounds such as antibiotics. But these pumps function here to secrete a constituent of the bacteria themselves: c-di-AMP. Such secretion is harmful to the bacteria because they now have to cope with the consequences of having elicited powerful host defenses. Makes you wonder how come it was not selected against and what else is going on with this story. Nevertheless, here it is, another case where the invading agents announce their presence to their own detriment. (In the words of Lewis Thomas, bacterial lipopolysaccharide is just such a “visiting card.”)

How did the investigators make this discovery? Observing Listeria mutants with multidrug efflux pumps with varying levels of activity, they found that the amount of interferon made correlates with pump activity. This suggested that induction of interferon production was due to a secretable, relatively low molecular weight compound. So, they fractionated culture supernatants and identified the active compound as c-di-AMP. Store-bought c-di-AMP works the same way and in a dose-dependent fashion. What is novel and exciting here is that this cyclic nucleotide works outside the bacterium. Such signaling molecules are supposed to work within the cell that makes them. For a discussion on the secretion mechanisms of virulence factors, see a review by Vance, Isberg, and Portnoy.

Like Listeria, many other Bacteria and Archaea also have proteins with a c-di-adenylatecyclase domain, the active domain thought to make our favorite cyclic dinucleotide. In B. subtilis, this domain is part of a protein called DisA (DNA integrity scanning protein A). Interestingly, DisA is said to have a role in sporulation by monitoring DNA damage at the beginning of the process. DisA molecules are seen in intracytoplasmic foci that move inside bacterial cells, apparently scanning the DNA as they go, to detect the presence of lesions. This seems totally unrelated to the Listeria story, but it indicates that c-di-AMP may play a role elsewhere. Just what it might be doing in Listeria or other bacteria is a mystery. This is surely not the end of the story. c-di-AMP’s cousin, c-di-GMP, is getting a lot of play as a regulator, so we can put our money on the discovery of further roles of cyclic dinucleotides.

There may be also a practical aspect to this discovery. If Listeria has developed into such a powerful immunogen, might one not exploit it for making better vaccines? The Portnoy lab is giving this a good try and we will report of any progress they or others make along these lines.