Marine Snow: Dead Organisms and Poop as Manna in the Ocean

Editors' Note: Let’s face up to the fact that important ecological phenomena involving microbes are not always known to many microbiologists. Marine snow, a major factor in the biology of the oceans, is an example. We found an illuminating and well-written description of the subject in the blog Culturing Science and are reproducing it by permission of the blogger. 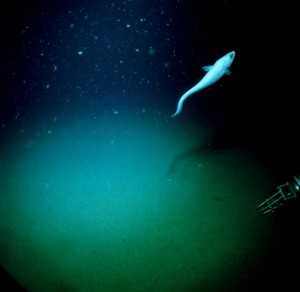 Figure 1. Rattail swimming out of a cloud of marine snow near the bottom of the northern trench of the Charlie-Gibbs Fracture Zone (4400 m, June 2003). Photo taken as part of MAR-ECO project through CFML.

When I think of the floor of the deep sea...I see always the steady, unremitting, downward drift of materials from above, flake upon flake, layer upon layer...the most stupendous “snowfall” the earth has ever seen.
Rachel Carson,
The Sea Around Us (1951)

Marine snow: does the phrase make you think of fish wearing ice skates, seahorses in knit caps, and crabs building snow-fish? If so, I can’t entirely blame you: the stuff looks like snow, hence its name. But marine snow is not composed of frozen water, each flake unique and beautiful. It is, in fact, made up entirely of dead organisms, poop, and random junk floating in the ocean. (Still fancy a marine snowball fight?)

To undergo photosynthesis, marine phytoplankton (the “wandering plants” in Greek) can only live in the sunlit areas (the photic zone) of the ocean, which rarely reaches a depth greater than 200 meters. The phytoplankton do their thing, you know, generate nearly half of the planet’s primary production (no big deal?!), until they are either eaten or die. And when you’re living at the top of a miles-deep ocean, the only way to go is down. And thus we have marine snow.

Marine snow is complicated stuff. While initially it is mostly composed of dead material, slowly drifting downward, overtime it is affected by many processes that create an indescribable mass of fluff and particles and organisms stuck together. But along the way, it continues to sink, until eventually it reaches the seafloor, often miles down. And it needs to reach that destination, as it is a primary source of carbon for deep sea organisms who have no light by which to photosynthesize.

A floater or a sinker?

But how does a clump of algae or cells manage to sink for miles? By straight physics alone, a particle in still seawater would take years to reach the seafloor. Add to that waves, currents, water stratification, and you have some particles that aren’t going anywhere. Many studies have provided evidence that most movement takes place when the phytoplankton have been ingested and egested as fecal pellets (i.e. poop). 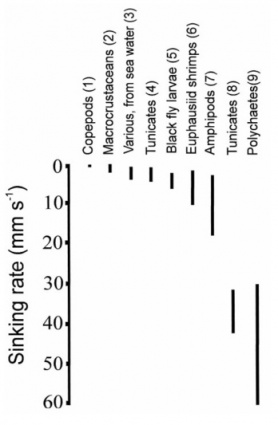 Figure 2. Sinking rates of fecal pellets of different taxa. Image from Wotton et al. (2001). Numbers at the end of taxa names refer to the paper where the data originates, as detailed at the end of this post.

An environmentally sobering study done in 1987 and published in Nature presents strong evidence for the increased sinking rates of fecal pellets. After the Chernobyl Disaster in 1986, when a nuclear power plant blew out and released radioactive fallout, scientists studying vertical transport in the ocean decided to make the best of the tragedy. Several days after the disaster on April 26, 1986, rain fell on the ocean, delivering the radioactivity to the surface of the water. The scientists had already set up particle traps at 200 meters depth and, upon review, found that radioactivity was found in the traps just 7 days after the rainfall, with an average sinking rate of 29 m/day. Physics predicted that radioactive particles would take years to reach this depth! To explain this discrepancy, the authors identified the particles as fecal pellets and — lo and behold! — the high sinking rate was explained by the repackaging of these radioactive particles through ingestion and then egestion by zooplankton. The fecal pellets were larger in size and more dense, and thus able to sink more rapidly through the water column.

But not all fecal pellets are created equal; many factors contribute to their size and density, which in turn determines how fast they will sink and quickly they will deliver carbon and nutrients to deeper waters. Different “types” of feeders, for example, have different efficiencies of repackaging as particles. Carnivores tend to eat larger food and make it smaller, while grazers such as filter feeding mollusks or some zooplankton species collect tiny, slow-sinking particles and collect them into a larger fecal pellet, greatly increasing the sinking rate of those particular particles.

In Fig. 2, from a 2001 Bioscience paper entitled Feces in Aquatic Ecosystems, data on sinking rates of various taxa are shown. However, these data need to be taken with a grain of salt. These are sinking rates from individual studies taken in different years in different parts of the ocean. Fecal pellet sinking rate is determined not only by repackaging efficiency by species, but also by the organisms’ diets, water turbulence at the surface, water stratification, season, and even time of day. But what it does show is how variable sinking rates are, even for something as simple as a little speck of poop. 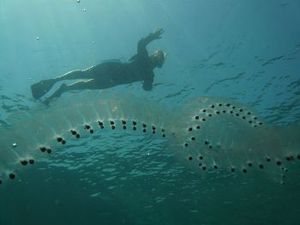 Figure 3. Salps, a zooplankton species, can form huge schools (275 individuals per cubic meter!), and are well known for their voracious feeding on phytoplankton. They are incredibly efficient repackagers. Their fecal pellets sink rapidly, and the bodies of the dead salps themselves provide a large amount of carbon to the seafloor. (See Iseki 1981 citation below)

But the wild trip isn’t over for organic carbon bound up in fecal pellets. As they sink, they get stuck in larger pieces of marine snow. They start to degrade from friction alone, but also from grazing organisms or microbes that are living on them*, creating more drag and slowing their sinking rate. And then, inevitably, a fish or a zooplankter comes along and eats them, transporting the carbon back up to the surface or down deeper until they are re-released as a fresh pellet, and the cycle begins again.

It seems like such a long and hard way to travel: passively drifting for miles, eaten and pooped out over and over again. How does marine snow ever make it to the seafloor? We had photographs of marine snow at the seafloor, but its existence did not seem to make sense. Paper after paper reported that marine snow in the water column decreases with depth due to much grazing in the euphotic and mesopegalic (where light reaches, but not enough for photosynthesis) zones. Most papers rely on sediment traps: essentially a huge funnel to collect small particles. A 1993 Nature paper evaluated this method itself, and suggested that it severely underestimates the volume of marine snow in the water column. But there had been no detailed studies yet quantifying marine snow volume in multiple locations and depths.

That is...until this May (PNAS, 2010), when the marine snow veterans Alexander Bochdansky, Hendrik van Aken, and Gerhard Herndl decided to try a new method: quantification through photographic analysis and optical backscatter.

On a research vessel, the team traversed a 4000 km horizontal transect across the Atlantic, including area over the Romanche Fracture Zone, which at 6000 meters is the deepest section of the mid-Atlantic Ridge. The researchers threw lights at sections of water at particular angles, and the light reflected back by particles was visible in photographs (>500 µm). They additionally used a Seapoint Turbidity Meter, which quantifies light reflected off of very small particles in the water through voltage. By running these tests at 17 points along their transects, and at these points, from the surface to the ocean floor, the researchers were able to visualize a bigger picture for particulate and marine snow suspension in the ocean. 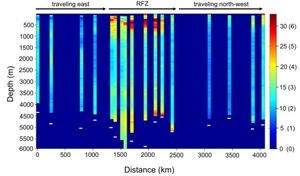 Fig. 4 shows this picture. In the upper 2000 meters of the ocean, marine snow abundance is high, gradually decreasing with depth, with microscopic particles more abundant than macroscopic ones. But below 2000 meters, there is an increase in marine snow overall, and there are greater numbers of macroscopic particles than microscopic. The researchers also looked at oxygen rates in each frame they selected, and found a significant negative cross-correlation between oxygen values and particle volume, or more particles meant less oxygen. This suggests that there is greater oxygen consumption at particles, indicating microbial respiration.

The authors suggest that, at greater depths, the marine snow particles and fecal pellets form larger aggregates, which slows their sinking rate due to increased drag and decreased density. These are larger particles that are sinking very slowly or are neutrally buoyant, and are thus not caught in sediment traps. The particles that are able to escape the highly grazed areas of the mesopelagic clump together in the deep, but are less rapidly consumed because there are simply fewer organisms around to consume them. Slowly but surely they sink down, providing carbon to the depths and forming “hotspots of biological activity.”

In light of recent research: ecosystem effects of decreased phytoplankton Marine phytoplankton have been hot in the news lately: Daniel Boyce and Boris Worm published a study in Nature (covered well by others) reporting that over the last century, marine phytoplankton biomass has decreased by 1% per year. You read right: the organisms that produce nearly half of our oxygen and absorb a significant amount of carbon dioxide are disappearing at an alarming rate.

Much of the coverage has focused on the climate change aspect of this study. Phytoplankton are a huge carbon sink, and it was assumed that increased temperatures through climate change would actually increase their growth. But — alas! — the decrease in phytoplankton biomass actually correlated with increased sea surface temperatures. So the exact opposite of what we predicted would happen is occurring, according to this study.

But I’m an ecologist: what does this decrease in phytoplankton mean for the marine ecosystem? As I’ve explained throughout this post, phytoplankton are the primary energy source for the ocean. They themselves convert sunlight to energy, are eaten by other organisms, and then this poop slowly sinks to the deep-sea to provide food for organisms living on the seafloor. In his 2002 review, Jefferson Turner argues that seasonal mass sinks of phytoplankton and algae biomass are vital for survival for deep-sea organisms.

While we probably haven’t lost enough phytoplankton to cause great loss in the deep, it’s something we should be thinking about. A tenet of ecology is that a change in the abundance of one organism can have cascading effects through an ecosystem, in turn affecting the abundances of many others. The thought of losing a primary carbon sink is unsettling; but the thought of removing a crucial food source for most of the ocean is far more horrifying. It seems unlikely enough that a fecal pellet would reach the deep on its own even with the relative abundance of phytoplankton that exists now. Losing a significant amount of phytoplankton could have grave impacts through the entire ocean ecosystem. I don’t think we want to know the end of that story.

* Fecal pellets as microhabitats or even islands is a fascinating subject. For a great overview, see Azam and Long's 2001 Nature paper on the subject, including why this microbial activity should be included in climate models. A 1978 Science paper found that there is greater taxonomic diversity on pellets than in the open water, and that the species living in and on pellets is significantly different that those in the water. Also, organisms that survive gut passage (microbes and invertebrates) are often released, live, in fecal pellets. For more on this, see this recent paper on applying island biogeography to fecal pellets.