« The Ins & Outs of Those Mysterious Microcompartments | Main | Of Terms in Biology: Monophyletic, Paraphyletic... » 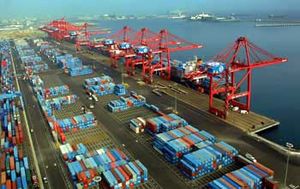 Evolution is often thought of in functional terms. Mutations that improve or diversify a protein’s function are selected for, whereas disruptive mutations are selected against. However, economy can also play a role in protein evolution.

Amino acids used in proteins vary in size, complexity and chemical characteristics, which makes some cheaper to synthesize than others. Consequently, some proteins are more economical to produce than others. Previous studies (click here and here) have shown that abundant proteins are often less expensive to make, thus reducing their cellular cost. However, the connection between a protein's location and its expense has not been appreciated. Recently, the ASM online journal mBio published our paper, Economical Evolution: Microbes Reduce the Synthetic Cost of Extracellular Proteins, which demonstrates that proteins destined for locations outside the cell cost less to produce than intracellular ones.

I became interested in the idea of protein economics while in Matthew Chapman’s laboratory, where they primarily study curli (click here and here). Curli are extracellular fibers produced as structural protein components of biofilms by many bacteria, including E. coli. One of my projects was to screen for additional genes that affect curli production. One resulting mutant and a related story involving the regulation of glyA (which interconverts glycine and serine) by the master curli regulator CsgD suggested that glycine metabolism and curli production are intertwined. One possible reason is found in the composition of the primary curli fiber protein CsgA. CsgA is exceptionally rich in glycine; at 19.2%, it has the sixth highest glycine content of all proteins in E. coli. Moreover, glycine, being a simple amino acid, is one of the cheapest to produce. So the question arose: is CsgA itself cheap to produce? 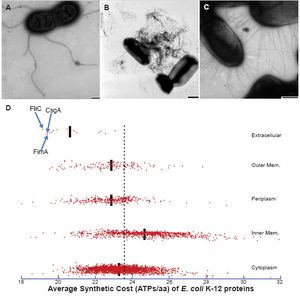 In a way, this makes sense from the bacterium's point of view. Assembling a lot of curli fibers (see figure) outside the cell is a huge economic cost. Reducing cost without impairing function would increase the fitness of a bacterium relative to its neighbors. When we then examined other inexpensive proteins, we noticed a startling trend. We found that using several different measures — chemical energy, mass, carbon content — to calculate protein cost, all of E. coli’s extracellular proteins are more economical than average. Extracellular proteins are indeed cheaper to make.

E. coli’s thrifty ways add up to big savings. Looking at just FliC, the major fiber subunit of flagella, we calculated the energy saved is enough to rotate the flagellum constantly for 24 minutes. Considering the expected doubling time of an E. coli cell, that is like getting free fuel for life. 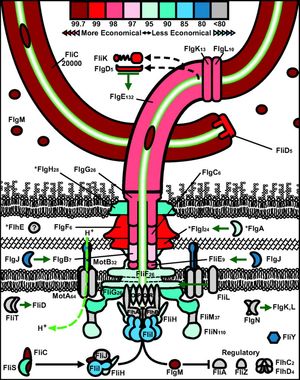 (Click to enlarge) Protein abundances and costs of flagellar proteins. Proteins with lower average synthetic costs (ASCs)have higher percentiles and are dark red. * = proteins with Sec secretion sequences. The number of proteins per flagellum is indicated if known. Source

Not surprisingly, E. coli is not the only microbial miser. We performed similar protein economy calculations for a wide range of bacteria, as well as for yeast, and found the same trend: proteins secreted to the extracellular environment are made up of cheaper-to-produce parts than are those found inside the cell. Could there be some other reason for this economy? This economic bias correlates with protein location, but not with coding GC content, protein function, length, structure, or abundance.

Many extracellular proteins are inexpensive but not particularly abundant, which led us to question the reason for their economy. Reading Small Things Considered definitely helped. In particular, Talmudic Question #48 got me thinking about protein import in bacteria: Can you think of an example of an intact protein molecule being taken up by a free-living bacterium? For the most part, there are very few examples of deliberate uptake of foreign proteins by bacteria. The best example I could come up with was P pilus retraction; intriguingly, the subunits of these fibers are less economical than those of other extracellular structures. Whoever said blogs are a waste of time doesn’t read this blog!

Currently, we think the economical bias in extracellular proteins is due to bacterial secretion often being a one-way street. Because of this, bacteria are not good at regaining the resources invested into secreted proteins. Relative to cellular proteins, the amino acids of extracellular ones are less likely to be recycled and reused. We think evolution has in turn selected these extracellular proteins for increased economy to minimize this loss.

The whole project was an intriguing tangent from the usual focus of our lab. Learning about the many diverse microbes, their varied secretion systems, and their complex cell physiology was a lot of fun. We hope our work will improve upon current prediction methods for extracellular proteins and increase our understanding of the selective pressures shaping their composition.

Daniel is a graduate student in the Department of Molecular, Cellular and Developmental Biology, University of Michigan, Ann Arbor.

I would like to thank everyone involved for bringing this to my attention. Our lab studies Caulobacter crescentus, but more specifically the secreted S-layer protein that it produces.
C. crescentus was listed in this paper as the most economical gram-negative and RsaA (it's S-layer monomer) was listed as the second most economical secreted protein in the study. Caulobacters are experts at living in dilute, nutrient-poor environments, it makes perfect sense that they evolved to be stingy with their proteins, especially their most highly expressed protein, the S-Layer protein, RsaA. This is a incredible insight. We have long know and discussed that RsaA is mostly made of 'small, simple' amino acids but we never clued in to the economy of those amino acids. We often get so in vitro focused that we forget that our organisms exists outside of the lab