This is the second post for this year's Week of the Fungi on STC, a sporadic undertaking. This annual festival is our way to hail the start of the fall mushroom collecting season in parts of our home territory (the northern hemisphere).

Is it OK with you if on Fungus Week we post an item that deals with fungal genes instead of whole fungi? We want to do this because of a startling finding, that some aphids are colored because they possess fungus-derived genes for making carotenoids. This is news because until now it was thought that animals cannot synthesize such pigments — only prokaryotes, fungi and plants can (which is why vitamin A, a carotenoid, is a vitamin). But there you have it, some aphids are green and others are reddish depending on which carotenoids they make. It had been thought that these animals get their carotenoids either from their diet or from bacterial endosymbionts. However the sap they live on has no such things, and their symbionts lack the genes for carotenoid biosynthesis. In addition, curing the insects of the symbionts does not affect the color. Lastly, the symbionts are inherited maternally, whereas color follows Mendelian inheritance.

(Click to enlarge) Coloration of pea aphids. A typical green; B typical red; C a green mutant that arose from a red clone. Source

Of course color matters. Animals use color to respond to enemies, find food, and in some cases, seek out a mate. The predators of the aphids are good at telling colors. Lady beetles find red aphids to their liking, whereas certain wasps prefer green ones. And who knows in how many other ways color makes a difference to these insects!

The genome of the pea aphid, which has recently been sequenced, contains genes for several carotenoid biosynthetic enzymes that are homologous to those of some fungi. The arrangement of genes is similar in aphids and fungi. This is not to say that these genes have not diverged. The aphid ones have much larger introns and intergenic spaces, as is typical of the aphid genome. The authors muse that the ancestral gene donor was a fungus symbiotic with the aphids or their host plants. 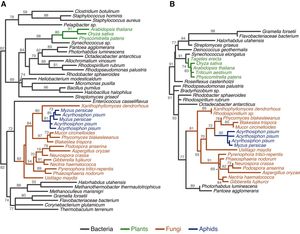 (Click to enlarge) Phylogenetic relations of inferred carotenoid biosynthetic enzymes from the pea aphid genome. A Carotenoid desaturases and B carotenoid cyclase – carotenoid synthases. Sequences are
from aphids, bacteria, plants, and fungi; no homologs were detectable in other sequenced
animal genomes. (I think this is the first time we posted a dendrogram in this blog!) Source

The authors compared aphids of different color arising from polymorphism. Red aphids have a 30-kilobase region encoding a carotenoid biosynthetic enzyme, desaturase, that is absent from green individuals. Furthermore, a mutation causing an amino acid replacement in this enzyme results in loss of the carotenoid torulene, and turns the red aphids green.

This is far from the only example of animals acquiring genes from other sources, such as bacteria, although not all the acquisitions are functional. For examples, see here and here. However, this seems to be the first known case of gene transfer between animals and fungi. Also, so far, it is the only known example of the acquisition of the carotenoid synthesis machinery by an animal.

How I loved this article when it came out in Science, and I very much enjoyed this thoughtful review of it, Elio. One of the tough parts for my undergraduates is the concept of just how, well, promiscuous gene transfer is in the microbial world (and apparently not just in that microscopic context, as this article suggests). The species concept as taught---reproductive isolation---becomes a near ossified paradigm in their minds.

Actually, I tell them, for the microbial world, the broadness of gene transfer is similar to having a child by one's Caesar salad. Hmmm.

This article and essay is a great way to remind students whose minds are opening to the Microbial Way that "frequent horizontal gene transfer" is more than four words. And more frequent than we suspect.