Reading phylogenies is a skill that can appear deceptively simple at first glance. In essence, it really is simple, but also counterintuitive to the way the mind is used to working. Far too often — and popular literature as well as science journalism is notorious for this — mistakes are made, mistakes as simple as assigning a significance to the linear order of taxa, assuming that the rightmost taxon is the most derived or the ‘highest.’ Furthermore, some terminology like paraphyletic and polyphyletic may seem confusing at first, given that we typically don’t deal with sets of evolutionarily related items in everyday life. 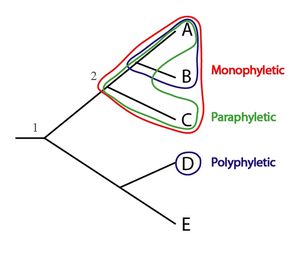 A group that includes all the descendants of a given ancestor along with their last common ancestor is called a clade. A clade is sometimes referred to as a monophyletic group, or maybe not. It depends on who you talk to (see below). Animals are a clade, as are eukaryotes. As are A, B, and C, along with their common ancestor 2. In contrast, a group of taxa that lack a common ancestor, such as A, B, and D, is polyphyletic. Classic examples would be ‘flying animals’ (e. g., bats, birds, and insects) or amoebae (including Amoebozoans, Heteroloboseans, Chlorarachniophytes, and many animal cell types.)

A paraphyletic group includes the common ancestor, but is missing some of the descendants, a classic example being my own kingdom of choice, Protista. Reptiles are often used to demonstrate that as well, since they gave rise to the birds and mammals that are not classified within the reptiles. (Thus, it can be argued that 'reptile' is not a valid taxonomic group.) In our alphabetic phylogeny above, the group A, C, and 2 is paraphyletic, as B is omitted. A paraphyletic group is likely, but not required, to carry some ancestral features that may have later been lost by some of its shallow-branching descendants.

Some have argued that Bacteria may be paraphyletic. In this view, Eukarya and Archaea are derived from Bacteria, rather than all three domains being distant from a long-lost common ancestor, as is commonly assumed. In this case, some Bacteria may be more closely related to Eukarya and Archaea than they are to other Bacteria. As the group ‘Bacteria’ would exclude Archaea and Eukarya, that would render it paraphyletic.

To make things fun, as usual, there are two conflicting terminologies (yes, taxonomists can’t even agree on the labels for their various types of phylogenetic groups). The conflict is over the word monophyletic. Does it mean any group that includes the last common ancestor (fig b below) or clade (as in fig a)? In an older system that is still used by some, the issue is ‘resolved’ with holophyletic meaning clade, and with monophyletic being a broader category that includes basically anything that is not polyphyletic, thus including both holophyletic and paraphyletic (see diagram). The more commonly used system these days lacks holophyletic altogether, and synonymises ‘monophyletic group’ with clade (as in fig a). Thus, one must be careful with their use of ‘monophyly’ depending on who one is talking to.

And lastly, a caveat about trees: there is no single best tree. It is not even understood whether we can theoretically know whether we have the best tree or not. In some cases, the phylogeny is solid, and you can get away with just looking at a single tree, as with vertebrates for the most part. In many other cases, the phylogeny is not yet established, and conflicting data make it wise to examine several. I’d check phylogenies done by different methods and using different genes or proteins, and compare them to find where the agreements and disagreements lie. If, like me, you are not a phylogeneticist, your best bet would be to go with a tree made by a known and trustworthy group or method such as Bayesian analysis, or at least maximum likelihood. Be careful with parsimony! Check others as well, and note where disagreements arise. Ask people who are in the know. Phylogenies change, and having a rigid tree in your mind would only cause pain and tears! And even if a gene tree is indeed the perfect tree for that gene, that may not necessarily tell the whole store of the organism in question. Genes are finicky and can cause artefacts, sometimes very consistent ones that are also consistently wrong.

Use phylogenies with caution!

For more information about reading phylogenies and avoiding common misconceptions, I recommend:
Gregory, T. Ryan (2008) Understanding Evolutionary Trees. Evolution: Education and Outreach 1(2): 121-137.
and for one approach for rooting of the tree of life:
Cavalier-Smith, T. (2006) Rooting the Tree of Life by Transition Analyses. Biol Direct 1: 19.

Yana, aka Psi Wavefunction, is an undergraduate in the Department of Botany, University of British Columbia, and the host of the blog Skeptic Wonder: Protists, Memes and Random Musings.

I am aswini M.Sc student from India,its very useful information for me to participate in our Microbiology department weekly discussion.thank you