« Of Terms in Biology: Monophyletic, Paraphyletic... | Main | Color Me Aphid »

This is the third annual Week of the Fungi on STC, a sporadic undertaking. It is our way to hail the start of the fall mushroom collecting season in parts of our home territory (the northern hemisphere). 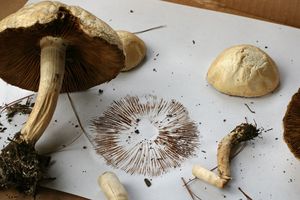 Sooner or later, but usually sooner, anyone dealing with fungi will have to deal with the issue of spore dispersal. Many fungi, mushrooms included, are a spore’s way of spreading spores through the environment. They do this in varied and universally ingenious ways. Spores, like mammalian sperm, are made in excess, which enhances the chances of some “making it.” Anybody who has made the spore print from a mushroom can attest to the large number of spores produced. This is true not only for the Basidiomycetes, to which most mushrooms belong, but also for the larger Ascomycetes, (the group that includes not only yeast but also most molds, as well as larger organisms such as the cup fungi). 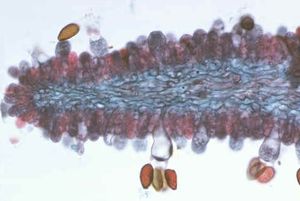 For dispersal to be efficient, the spores must travel a certain distance from their place of origin. They are ejected with great force, sometimes challenging our belief. (For a previous article in this blog, click here.) For example, the spores of the ascomycete plant pathogen Sclerotinia sclerotiorum are ejected at a speed of 8 meters/second, but decelerate after traveling only 3 mm. Thus, no matter how forcibly they are popped out, pretty soon they come to a halt because they are small enough to feel the drag from the air through which they travel. 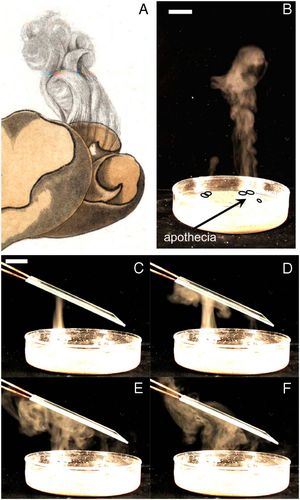 Synchronized ejection creates a coherent jet of air, enhancing dispersal in open and crowded environments. A Early documentation of synchronous spore release in a 1791 drawing of Otidea cochleata (from Histoire des champignons de la France by J.B. Bulliard). B Spore jets originating from S. sclerotiorum fruiting bodies travel much farther than individually ejected spores. C – F If the jet impacts upon an obstacle, such as a glass slide, then pressure gradients within the jet displace spores out and around the obstacle. Images are taken at time 0, 0.11, 0.32, and 0.55 s after initial impact. Bar = 2 cm. Source

A recent finding by Anne Pringle and colleagues has uncovered a new wrinkle on spore ejection. It turns out that when a lot of spores are ejected at the same time — in a single puff — they produce a flow of air. In other words, they generate a bit of wind. When spores cooperate in this manner, they can travel 20 times farther than when single. The authors observed spore jets that were more than 10 cm in length. In the process, some spores are sacrificed to produce the favorable airflow. As the authors point out, this creates the potential for conflict among spores, something that bears looking at. This paper is chock full of mathematical equations, which ought to keep the aficionados busy for a few hours. But for now, relish the concept of “unselfish spores.

Roper M, Seminara A, Bandi MM, Cobb A, Dillard HR, & Pringle A (2010). Dispersal of fungal spores on a cooperatively generated wind. Proceedings of the National Academy of Sciences of the United States of America PMID: 20880834