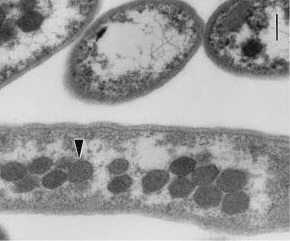 The planet's most abundant enzyme is also one of its lousiest. It's RuBisCO, the photosynthetic enzyme that mediates the fixation of CO2 by catalyzing its incorporation into the five carbon ribulose-1,5-bisphosphate (RuBP). Routinely it goofs and incorporates O2 instead, producing the useless and potentially harmful phosphoglycolate, which cells must then expend energy to dispose of. And even if O2 is not around to confuse the enzyme, the Km of cyanobacterial RuBisCO for CO2 is still greater than 150 μM. The CO2 concentration in the aquatic environments where cyanobacteria live is typically less than 15 μM. Cyanobacteria and other RuBisCO-containing bacteria deal with ill-behaved RuBisCO by confining it in microcompartments called carboxysomes. Confinement of RuBisCO turns out to be for its own good, and for the good of the cell as well. 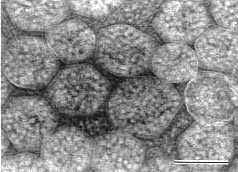 The carboxysome is not your typical membrane-bound organelle. No lipids are used in its construction, only proteins, several thousand of them, and mainly of 3 or 4 different types. The 300 MDa icosahedral structure — that's more than 100 times the mass of a ribosome — is 80 to 150 nm in cross section. When first observed in the cyanobacterium Phormidium uncinatum back in 1956, they were mistaken for viruses. In retrospect, those early observers were not that far off. Electron microscopy, taken together with x-ray structures of prominent subunits, suggests that the structural organization of the carboxysome is reminiscent of a viral capsid. 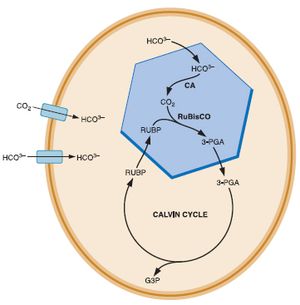 Figure 3. The bacterial CO2 concentrating mechanism. Carbon enters the cell as bicarbonate or is converted to it from CO2. It accumulates in the carboxysome and is converted into CO2 at a concentration sufficient for RuBisCo to carry out carbon fixation. Source

About 250 RuBisCO complexes are found within a typical carboxysome. How does confining RuBisCO mitigate its abysmal Km and offset its inability to discriminate between CO2 and O2? The key is that confined along with RuBisCO is carbonic anhydrase, which catalyzes the conversion of bicarbonate into CO2. Bicarbonate is actively transported into the cell, but carbonic anhydrase is present only in the carboxysome, so the concentration of CO2 spikes in the immediate vicinity of RuBisCO. And the carboxysome helps RuBisCO along in yet another way, by providing a selective diffusion barrier that traps CO2 but permits the larger bicarbonate to enter and the much larger RuBP to leave. How this is accomplished by a purely proteinaceous structure is a mystery.

For years the carboxysome was assumed to be unique, a special microcompartment for an enzyme that was especially important and particularly poorly behaved. Then in 1994 another microcompartment was discovered in a very different bacterium. Salmonella enterica sequesters the enzymes required for growth on 1,2-propanediol, which is itself a fermentation product of certain sugars that are in good supply in the large intestine. But there's a price to be paid for metabolizing this double alcohol. The first reaction converts 1,2-propanediol into propyl aldehyde (propionaldehyde) , a respiratory toxin and mutagen. The 1,2-propanediol utilization (Pdu) microcompartment comes to the rescue by preventing propyl aldehyde's escape into the cytoplasm. It's now well established that enzymes that are required to convert 1,2-propanediol to propionyl-CoA via the toxic propyl aldehyde are truly and actually in the Pdu microcompartment. Although not as regular in shape as the carboxysome, its dimensions are of the same order — a 100-150 nm cross section, and a 600 MDa mass. There are again no lipids, only proteins, about 18,000 molecules in all, and some 14 to 18 different types. The mystery of selective permeability presents itself once again, with the Pdu microcompartment necessarily retaining propyl aldhyde, but allowing 1,2-propanediol to enter, as well as much larger nucleotide cofactors such as ATP and NADH. 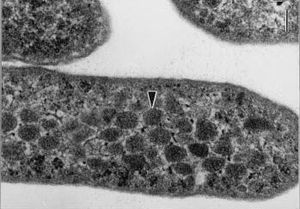 Microcompartments are a way of dealing with problematic but indispensable enzymes, and they operate by concentrating insufficiently concentrated substrates or by sequestering toxic reaction products. Of course the enzymes must be sequestered as well. These microcompartments are critically important. Cyanobacteria that are unable to form carboxysomes can grow autotrophically only if CO2 is provided at about 100 times the ambient concentration. And the growth of Salmonella enterica that is unable to form Pdu microcompartments is arrested during the period when propyl aldehyde is accumulated in the cytoplasm. It should come as no surprise that Salmonella enterica also constructs a microcompartment for ethanolamine utilization; the degradation of ethanolamine generates acetaldehyde. Bioinformatics analyses indicate that more than 40 genera of bacteria contain genes that code for microcompartment components. And it is likely that at least some of these putative microcompartments sequester processes other than the three that have been characterized. Micrcocompartments appear to be a uniquely bacterial adaptation; there is to date no evidence for them in Archaea or Eukarya.

One can easily envision (human) metabolic engineers making use of a microcompartment as a safe haven, as a place to sequester any process where one or more of the enzymes has low affinity for its substrate or produces a substance harmful to the cell. But exploiting these remarkable structures requires that one understand how they are assembled, how the enzymes that are supposed to get into them do so and of course, their mysterious small molecule selectivity. A recent study, in which the signals for protein import into the Pdu microcompartment were identified, marks an important step in this direction.

The study comes out of a group that has been publishing on the 1,2-propanediol microcompartment for the better part of a decade and it relies upon some straightforward bioinformatics analysis and the experimental tractability of Salmonella. Aligning homologous genes for aldehyde dehydrogenases from a variety of bacteria, the authors discovered a feature common to the subset of these genes that are in the vicinity of putative microcompartment component genes: these genes code for an extra 20 or so amino acids at the N-terminal end. A signal sequence perhaps? Sure enough, removal of the sequence from the propyl aldehdye dehydrogenase gene caused the enzymatic activity to accumulate in the cytoplasm instead of in the Pdu microcompartments. And appending the sequence at the N-terminus of such diverse proteins as GFP, GST, and maltose-binding protein sent those heterologous proteins to the microcompartments. Not just to the microcompartments, but into them. The authors then expanded their bioinformatics analysis to other enzyme families, and looked specifically for N-terminal extensions encoded in genes in the vicinity of putative microcompartment component genes. They did find them, for example, in the pyruvate formate lyase gene from Vibrio furnissii, and in the ethanol dehydrogenase gene from the familiar Escherichia coli K12. So the signal sequence seems to be a general microcompartment targeting strategy. General but not universal as no signal sequences have been found among carboxysome residents.

Expect future work in this area to focus on mechanism with an eye on practical applications. It will need to be determined, for example, if in addition to the signal sequence that gets the protein to the microcompartment, there are also retention signals in the protein that keep it there. The microscopy data in Fan et al. are at least consistent with this notion. Even with the PduP signal sequence appended to its amino terminus, GFP was found localized in 80% of the cells, and distributed in the others. How "sealed" is the microcompartment prior to protein import? Are proteins imported folded or unfolded? If unfolded, what mechanisms prevent or undo folding outside the compartment, and promote folding within it? It shouldn't take all that long to answer these questions. Fluorescence microscopy should help to resolve the question of a retention signal. And electron microscopy, which has already been employed in the study of how carboxysomes are assembled, could be applied as well to the Pdu microcompartment. There is then the question of how the microcompartment achieves its amazing selective permeability for small molecules. This question will take longer to answer and remains the macromystery of the microcompartment.

Nearly all of the background information in this piece was drawn from several informative reviews. One or more of the authors of Fan et al. contributed to:

Alan Derman is a Project Scientist in Joe Pogliano’s lab at the University of California at San Diego.

I agree with Ami: a wonderful post, and yet another example of something I will have students read and discuss. One of the paradigms we Microbial Supremacists must fight is the "prokaryotes do not have organelles" drumbeat. But bit by bit, the distinctions crack and crumble. I predict that soon we will call these subcellular compartments "prokaryotic organelles."

Microbiology marches on. Why, just the other day I heard an academic colleague very dogmatically state that prokaryotes did not have a cytoskeleton. Um.