This is the third post for this year's Week of the Fungi on STC, a sporadic undertaking. This annual festival is our way to hail the start of the fall mushroom collecting season in parts of our home territory (the northern hemisphere). Picture yourself walking in a woods where the branches of the trees are festooned with bouquets of yellow objects that on close inspection look a bit like golf balls, dimples and all. This is what you would come across in the beech forests of the southern hemisphere. The yellow balls are fruiting bodies of members of the genus Cyttaria, ascomycetes just like baker’s yeast and morel mushrooms. Cyttarias are plentiful. When mature, they fall off their branches, making a layer up to 15 cm deep on the forest floor. Hard to miss.

Cyttarias caught the attention of Charles Darwin during his visit to Tierra el Fuego. He noted that the natives, the Yaganes, ate these mushrooms, although oddly they bypassed fresh specimens in favor of older, wizened ones. Some years ago, I came up with a possible explanation. 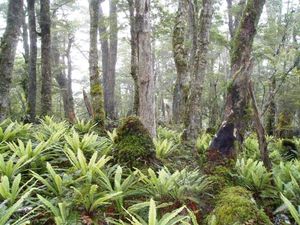 Uniquely among mushrooms, Cyttaria have a concentration of fermentable sugars. Indeed, in Chile some people use them for the production of an alcoholic beverage called “chicha de llau-llau.” So, could it be that the natives of Tierra del Fuego favored the older specimens undergoing fermentation? These people were surprisingly hardy; they were very scantily dressed, yet living under very harsh climatic conditions. I posited that a little alcohol from fermented cyttarias may have gone a long ways towards good cheer (Ref. 1). Nobody has come up with a better idea.

A recent study by Kris Peterson and colleagues probes into evolutionary aspects of the cyttarias. They reported solid evidence for the cophylogeny (the overlapping of their phylogenetic trees) of these fungi with their hosts, the southern beeches of the genus Nothofagus. Many regions in the southern hemisphere, including South America and Oceania, have abundant beech forests, and many trees therein are parasitized by cyttarias. 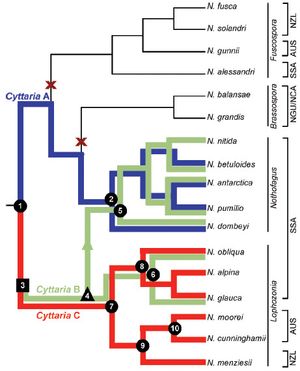 The phylogenetic correspondence between 11 species of the fungus and 10 of the host is close but not perfect. Yet, to quote the authors: Our results indicate highly significant overall cophylogenetic structure, despite the fact that the associations between species of Cyttaria and Nothofagus usually do not correspond in a simple one to one relationship. They arrived at other conclusions, as well: Two major lineages of Cyttaria are confined to a single Nothofagus subgenus, a specificity that might account for a minimum of two codivergences. Also, their data supports the idea that the fungi undertook trans-oceanic travels, e.g., between Australia and New Zealand. Thus, these organisms did not disperse just because of break-up of the supercontinent Gondwana, but relied on other means as well.

Finding cophylogeny between host and parasite is pretty exciting. In the world of prokaryotic symbionts, the phylogenetic trees of aphids and their the endosymbionts overlap in a most pleasing manner. However, this is not an easy business and such relationships don’t grow on trees. (hmm!) Again to quote the authors: Confounding factors in this association relating to the parasite include host switching, extinction and speciation in the parasite lineage but not the host lineage. Despite this, the use of advanced analytical tools led these researchers to interesting and challenging conclusions. Although not the same as coevolution (which implies reciprocal evolution), cophylogeny can help us understand the nature of parallel processes that have led to the evolution of both host and parasite.